RuPaul’s Drag Race kicked off its fourth All Stars season on Friday by hosting a talent show for LGBTQ veterans and active service members. And just like war, it was hell. Let’s break the premiere down queen-by-queen, shall we?

TRINITY TAYLOR | After discovering her comedic talents during Season 9, the Tuck sashayed into the workroom with renewed confidence and an all-plastic ensemble to match her all-plastic body. I can’t say I expected Trinity to end up in the top two this week, but I didn’t disagree with Ru’s choice. (Side note: Does anyone else think Trinity looks like an older version of Farrah? Like, might we have a Looper-type situation on our hands this season?)

MONIQUE HEART | Arguably the most-improved queen of the bunch, Monique entered the season feeling (and looking!) absolutely brown cow stunning. I used to think Monique advertised more than she could actually deliver, but I’m officially changing my tune. (And that tune is now “Brown Cow Stunning,” a song I will never, ever get out of my head.) 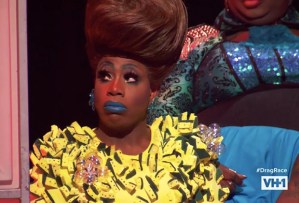 MONET X CHANGE | Speaking of Season 10 contestants who turned one mistake into an entire brand, sponge queen Monet X Change made the bold decision to sing live in the talent show, a risk that didn’t entirely pay off. Fortunately, her sickening looks and solid reads were enough to keep her out of the danger zone… For now.

NAOMI SMALLS | Desperate to prove that she’s more than “just a tall, pretty fashion model” — a relatable problem! — Naomi turned the talent show into her personal catwalk, serving us more poses than, well, an episode of Pose! That said, if Naomi wants people to think of her as (sigh) more than a model, she’ll have to start doing more than just, you know, modeling.

GIA GUNN | Shadier than ever, Gia spent most of Friday’s premiere belittling her fellow queens (“I don’t think tucking is a talent”). But as much as I want to hate her, I have to admit that [A] she’s usually not wrong, and [B] her magical kibuki performance killed. Were it not for her atrocious reading, she probably would have had a shot at winning this week. But karma’s a bitch, and based on this premiere, so is Gia.

FARRAH MOAN | Is it just me, or has Farrah gotten even whinier since last we saw her? I mean, I get that it’s her schtick, but Farrah’s can’t-do attitude makes it so hard to root for her. Did I get excited when I realized she was doing a Christina Aguilera-inspired burlesque number for the talent show? Of course. But was I surprised when she took a sloppy tumble in the middle of her performance? Sadly, no. It’s ironic how Farrah acknowledged that she competed in Drag Race Season 9 before she was ready — because it’s pretty clear that she’s still not up for the competition, much less ready to battle some of the franchise’s most iconic queens. 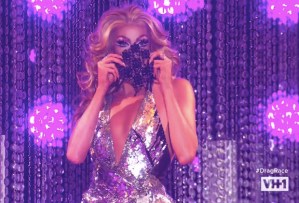 VALENTINA | The future star of Fox’s Rent Live may be a drama magnet, but Valentina kept a relatively low profile in this first week of competition. Sure, there was some awkwardness in the workroom — I’m still not quite sure how much she and Farrah patched things up — but it was smooth sailing for the most part. Her reading was fine, and her lip sync performance at the talent show had the whole audience jumping.

JASMINE MASTERS | Oh, dear. Oh, dear, dear, dear. Where do I even begin with this sweet soul? Bless her heart, Jasmine refused to admit that her stand-up routine — which delivered completely off the cuff with no script whatsoever — wasn’t funny, arguing instead that her fellow queens simply didn’t like what she had to say. (Well, her fellow queens and the judges. And the studio audience. And the viewers at home.) Much like Farrah, Jasmine’s place in this week’s bottom two became clear very early on.

LATRICE ROYALE | A refreshing addition to the season, Latrice effortlessly won the premiere’s mini challenge, reading her fellow queens to utter filth. (Sample read: “Naomi Smalls. Legs, leg, legs. … Can we get a side of brains with that?”) The audience seemed more impressed by her flag-twirling performance of “Excuse the Beauty” than I was, but hey, this is why I’m not on the judges’ panel.

MANILA LUZON | While I’ll admit to doing a full belly laugh at Monet’s read of Manila (“Emphasis on the ‘lose.’ Twice.”), this returning icon isn’t in danger of losing again anytime soon. Her reading was solid, and her upside-down painting talent was brilliant — once I realized what the hell she was doing, of course.

When the glitter settled, Monique and Trinity deservedly landed in the top two, while Farrah and Jasmine (also deservedly, sorry!) found themselves up for elimination. And if we’re being real, neither of the bottom queens successfully plead her case; Farrah’s crying got so bad that Monique called her annoying to her face, and Jasmine kept insisting that her stand-up routine was funny — even though it was objectively unfunny.

Monique and Trinity faced off to Mariah Carey’s “Emotions,” which Trinity would later call an appropriate song choice, given the difficult decision ahead of her. I feel like Monique would have won the lip sync if she’d been able to keep her damn wig on (the tone in Ru’s voice when she advised Monique to invest in some tape was real), but I’m A-OK with Trinity getting the win.

With a heavy, plastic heart, Trinity ended Friday’s premiere by eliminating Jasmine. “I don’t do the whole crying situation,” Jasmine said as she packed up her station. “But you have not seen the last of me yet.”

Do you think the right queen left the competition first? Vote below, then drop a comment with your thoughts on All Stars 4 thus far. Who do you predict will go all the way?