When it comes to the latest RuPaul’s Drag Race elimination, it’s not so much the who that has us baffled, but the how and why.

At this point in the competition, the remaining seven queens have all proven themselves worthy of the crown, which means one wrong move — even by a supposed frontrunner — is all it takes to get eliminated. And on Friday’s episode, Valentina made all the wrong moves.

Not even Guadalupe could save the hot mess of a pilot she put together with Nina Bo’nina Brown — this week’s other member of the bottom two — as part of a challenge to see which queens would rule the small screen. Their show, in which two (framed?) prostitutes turn their lives around and become drag queens, was so nonsensical and unfinished, Michelle Visage couldn’t help but ask them, “Do you think maybe a script would have helped?”

Indeed, a script would have helped. But you know what would have been even more useful? A teleprompter for Valentina, who straight-up didn’t know the words to Ariana Grande’s “Greedy,” this week’s battle song. (I mean, no one knows that song, but if I had to sing it on TV, you bet your padding I’d learn it.)

Even worse, Valentina tried to get away with wearing a damn scarf to cover her mouth! It took RuPaul stopping the music and scolding her (“We need to see your lips. … What part of that do you not understand?”) in order for her to remove the scarf. At that point, Nina could have practically walked off stage and still won the battle, but she still gave it her damn all — possibly to prove to all those naysayers (whoever they may be) that she deserves to remain in the competition.

With tears in her eyes, Valentina, once favored to win it all, sashayed away in seventh place.

* How awkward was it to watch guest judge Noah Galvin critique the queens’ pilots mere days after his own ABC comedy, The Real O’Neals, was cancelled. (I know he filmed this way before that happened, but it’s still unfortunate timing.)

* Quick casting question: Not that it really matters, but wouldn’t it have made more sense for the pit-crew members to swap parts if they were playing Peppermint and Alexis Michelle’s sons in this pilot? 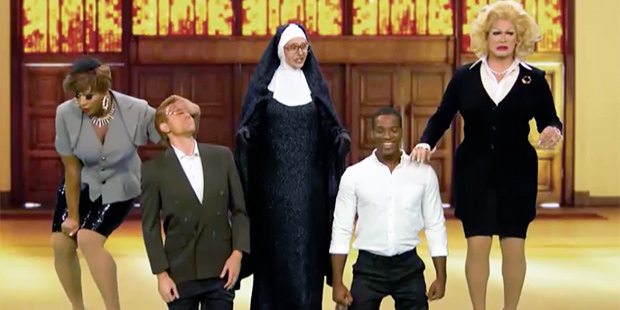 * And speaking of that sketch, when did Alexis turn into the villain? (I’m thinking some of that Wicked Witch body paint from last week seeped into her pores. That’s got to be it.)

Your thoughts on this week’s episode? Valentina’s elimination? Whatever’s on your mind, drop it in a comment below.