The Salvatore School has already faced a dragon, a gargoyle and a spider monster in Legacies‘ first four weeks on the air, but star Danielle Rose Russell promises that the wildest creatures are still to come. “You haven’t met my favorite one yet,” Russell tells TVLine, adding that it will finally rear its (presumably) ugly head in Episode 7.

Russell also assures us that there’s a method to the show’s mythological madness, which will soon reveal itself. “When we shot Episode 2, I was like, ‘Dragons? Really?‘ But it all starts to make sense,” she says. “Some things will be explained in Episode 5. You’ll find out why these monsters exist in this world and why they’re here. I’m excited for that explanation, because that’s when our show really begins. The overall Big Bad is coming.”

She also can’t lavish enough praise on the show’s “amazing” monster and special effects team, which manages to craft new creatures for the show on an incredibly tight schedule. “We have eight days to do each episode and we always have a new monster,” Russell says. “They do incredible work. And there are so many more I wish I could talk about. They’ve really exceeded my expectations.” 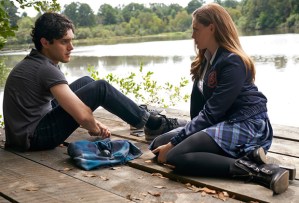 In the immediate future, tonight’s episode (The CW, 9/8c) leads to more growth for the show’s core non-couple. “For all the people who do ship Hope and Landon, you’ll see them come to terms with certain things in this next episode,” Russell says. “My stuff with Hope and Landon has been my favorite, because I love playing romantic Hope and angry Hope. He’s someone who somehow means so much and so little to her all at once.”

Do you have a favorite monster of the week from Legacies? (For the record, we will allow both Grodd and Ghostface.) And what are your thoughts on the show thus far? Whatever’s on your mind, drop it in a comment below.