We all have our dragons to slay in life — some more literal than others, as seen on Thursday’s Legacies. With Rafael by their side, because he’s apparently as hot-headed as he is regular-hot, Alaric and Hope went hunting for Landon “Must be Addressed by His Full Name at All Times” Kirby, discovering something even more dangerous (and scaley) in the process.

Locating Landon Kirby actually turned out to be the easiest part of the group’s mission; the brooding fugitive was hiding in a forest shack full of contraband, all of which he “doesn’t remember” stealing. (Sure, Jan.) But the situation became a little more complicated when a fire-breathing witch arrived on the scene looking for the knife. You know, the one Landon Kirby stole and lied about “losing.” (Is anyone else starting to feel like this guy is more trouble than he’s worth?)

Initially believed to be a “pyromancer,” the aforementioned fire-breathing witch eventually revealed herself to be a full-blown dragon — and she wasn’t going to slay herself. In lieu of “courage and a sword,” which is apparently the preferred method of dragon disposal in the Vampire Diaries-verse, Hope and the dagger would have to suffice… which they did not. And after Alaric was done cleaning up Hope’s mess, he called her out for bringing a death spell on their mission, one she was thinking of using on Landon Kirby.

“This hatred, this vengeance — it’s your father,” Alaric told Hope, warning that further use of black magic could very well destroy her. Fortunately, she won’t have to worry about using any more of it on Landon Kirby; while Hope and Alaric were busy fighting the dragon, he and Rafael took off. Again. And the whole experience clearly took a toll on Alaric, who ended the episode by wondering how he can continue protecting the students from “stuff that’s not supposed to exist.” Speaking of which… is that a gargoyle? 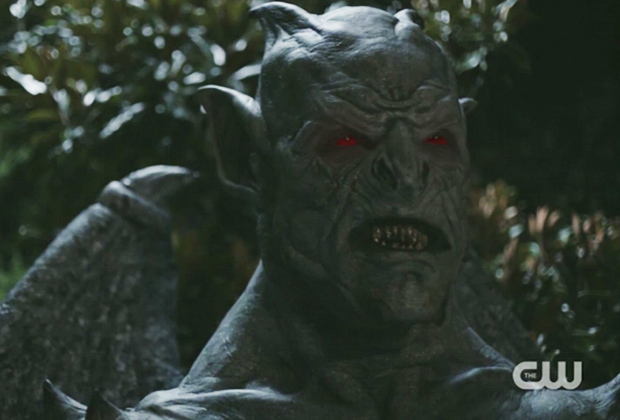 While their father was busy slaying dragons in the forest, Lizzie and Josie faced off against equally fearsome creatures: townies. Thursday’s episode marked the annual football game between the Salvatore Boarding School students and the god-awful swamp teens of Mystic Falls. Seriously, these kids are garbage. (Then again, Tyler Lockwood wasn’t exactly a peach in TVD‘s early days, either.)

The plan, as always, was to let the townies win and avoid raising suspicion about the Salvatore school, but that plan changed when a particularly nasty piece of work named Dana made a comment to Lizzie about being off her meds. Despite Josie’s strong objections, everyone started using their powers, narrowing the gap between scores considerably. But Josie was still determined to lose, using magic to sabotage Kaleb’s potentially game-winning catch, even after her fellow supernaturals agreed to stop using their powers.

But even though the Stallions lost, Lizzie still got to punch Dana in the face — while serving up a callback to TVD‘s “Not now, Dana!” — so it was like they won. Josie also came clean to Lizzie about throwing the game and doing black magic with Hope, a confession that brought them a little closer together. So, you know, it was also a win for sisterhood.

* Are we supposed to dislike Penelope? Between her dialogue in the premiere (“I’m an equal-opportunity evil temptress”) and in this week’s episode (“The next time you burn your ex’s hair off, make sure she can’t work a lob”), I’m kind of loving her. She keeps things interesting.

* That said, I’m concerned about Penelope’s reason(s) for helping MG win over Lizzie. I can’t help but feel like it’s part of a larger revenge plan against Josie; as we learned this week when Lizzie puked black goop after Josie did black magic, their connection is strong.

* This episode had quite a few nods to both TVD and The Originals, but this shot was easily my favorite: 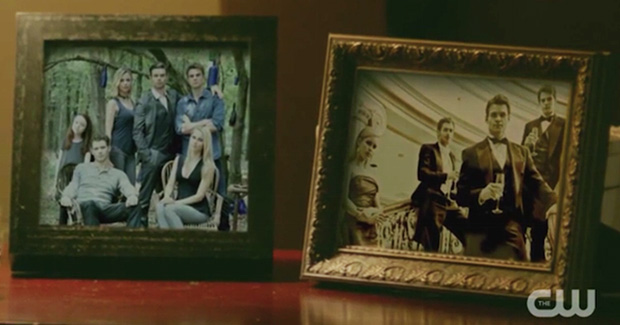 * How do we feel about that dragon? I knew Legacies would be introducing new creatures into the franchise, but I wasn’t expecting a literal flying, fire-breathing beast. I figured that “pyromancer” was as far as we’d go. I welcome the surprise, but I’m curious about what’s next. (I mean, when you start with a dragon, the possibilities are pretty much endless, right?)

Your thoughts on Thursday’s Legacies? Drop ’em in a comment below.