The CW’s Legacies welcomed two unlikely visitors on Thursday’s episode when MG’s nightmares were haunted by The Flash‘s Gorilla Grodd and Scream‘s stab-happy villain Ghostface. But how did these unexpected icons make their way to Mystic Falls, you ask?

“We wanted MG to have a nightmare about a monster from the comic books he was reading, so we asked [Greg Berlanti] and [the DC universe] if we could ‘borrow’ Grodd,” series creator Julie Plec explained Friday on Twitter. “They were VERY gracious. The first TVDU-DCU crossover!” Berlanti’s producing partner Sarah Schechter then told Plec, “I hope you’re doing a nightmare within a nightmare,” which is how the episode’s other surprise ghost — sorry, guest — came about. 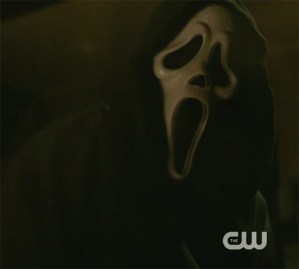 “As many of you know, I was Wes Craven’s assistant on Scream,” Plec wrote. “I remember the day that his producer found the mask in the kid’s bedroom of a house they were scouting. The studio tried to have a different version of the mask designed so that they could own it for merchandising. Alas, every different version sucked. Wes stuck with the store-bought mask and Fun World held on to ownership. Making Scream was one of the highlights of my life. It was the very first movie I worked on and it’s where [Kevin Williamson] and I fell in love. And years later, [Brett Matthews] was hired to be the showrunner of Scream Season 3. We were both excited to give Ghostface a shout-out.”

Your thoughts on this week’s very special guests? Drop ’em in a comment below.