Don’t expect an immediate answer about Rooster’s whereabouts when The Ranch returns for Part 6 (on Friday, Dec. 7).

Netflix on Tuesday dropped a full-length trailer for the second half of Season 3. In the new footage, the Bennetts are under the impression that Danny Masterson’s character is simply “missing,” but it offers no further details how Rooster will be written out for good. It’s likely the family has no idea that Rooster ditched town following a death threat from Mary’s ex-con boyfriend Nick, seeing as how Mary is still tending bar at Maggie’s.

The above video also introduces new recurring cast member Dax Shepard, who comes on board as Luke Matthews, a former soldier who befriends Colt and Beau. His character is first seen falling out of the back of a cop car (at the 1:55 mark), having been picked up for being drunk and disorderly. 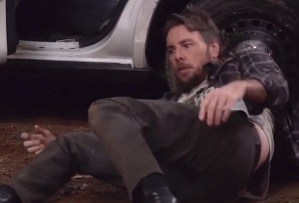 In addition to dealing with Rooster’s disappearance, The Ranch Part 6 will also feature the birth of Colt and Abby’s first child. The trailer also hints at possible retirement for longtime rancher Beau, just as Colt gets a handle on running the newly acquired Peterson Ranch on his own. (UPDATE: The fate of Masterson’s Rooster was revealed in The Ranch Part 6. Read our recap here.)

As previously reported, The Ranch has already been renewed for Season 4 (aka Parts 7 and 8).

Press PLAY on the video above, then hit the comments with your reactions!