This week on The Conners, Sarah Chalke reprises her role as Andrea, while OG Becky makes a big decision. 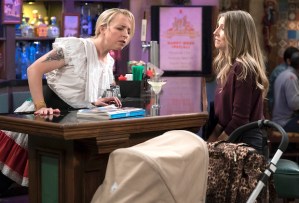 Becky hasn’t seen Andrea since the surrogacy mishap. When Andrea wanders into La Casa Bonita with her infant son in tow, she reveals to Becky that despite all the help that money can provide, she’s still overwhelmed by motherhood. In fact, she’s not even sure that she’s cut out to be a mom.

After Maria and Bridgette tell Becky that they’d like to adopt her child, Becky takes precious little time to think it over. She knocks on their front door in the middle of the night and says she’d like to go through with the arrangement. She then wanders over to the Conner residence to talk it over with Darlene. There, Becky confesses that she’s an alcoholic. She tells Darlene that she’s had the urge to drink ever since she found out that she was pregnant. Darlene assures Becky that she’ll have the full support of her family if she keeps the baby. What’s more, if Becky’s drinking becomes a problem, she’ll step in and help raise the child while her big sister gets her act together. Becky thanks Darlene for not being a “judgmental troll” for once, and says she’s never felt closer to her sister. And with that, Becky tells Maria and Bridgette that she’s changed her mind about the arrangement.

* Jackie gets a permit from the city to build a chicken coop in the backyard. What at first feels like an extraneous B-plot becomes something more when Jackie reveals to Dan that the chicken coop was an excuse to keep coming over every day now that Roseanne’s gone. In response, Dan tells his sister-in-law that she never needs a reason to stop by; she’ll always be family.

* Darlene quits her job at the casino to avoid dealing with a regular who’s constantly harassing her.

* Ben and Darlene seem to be tiptoeing around the inevitable. They share a moment when he teaches her a self-defense technique back at the office. Later, he shows up at the casino to check on her, which Darlene perceives as a very “boyfriend” move.

* In addition to the aforementioned return of Chalke, Natalie West reprises her role as Crystal. Dan’s stepmom returns to work at the casino, having decided that retirement isn’t all that it’s chalked up to be. “I was going travel,” she tells Darlene, “but as it turns out, I’m frightened of people who are different than me.”

What did you think of The Conners Season 1, Episode 6? Hit the comments with your reactions.