This week’s Roseanne reveals the title character is addicted to painkillers — which, for those who’ve been watching closely, isn’t much of a surprise. Warning signs included a scene in the premiere where Roseanne badgered Dan about getting the pills for her knee, despite not being able to afford more essential prescriptions. Then in “Darlene v. David,” Roseanne sent her husband out for a refill before Harris’ birthday party, prompting Becky to inquire about her mother’s continued usage.

In the episode, Dan and Roseanne toast their 45th wedding anniversary over a glass of champagne. We then cut to our next scene, and Roseanne is absolutely plastered. Dan points out that she’s only had a couple of glasses, then she lets slip that she also downed a whole ton of pills.

Roseanne wakes up the following morning to find a stern-looking Dan sitting at the kitchen table. He empties his pockets to reveal three more pill bottles he’s found stashed around the house, then asks why his wife’s been hoarding them. She swears she’s not a junkie, then explains that she didn’t say anything because they can’t afford her knee surgery. In response, Dan tells her to go ahead and book the procedure, despite the $3,000 deductible. He then hands her a single pill to alleviate her pain, before stepping out for a walk. Once he’s leaves, she heads to the freezer to retreive an ice pack, which she opens to reveal another stash of pills. 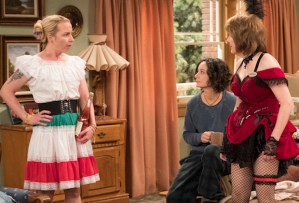 The B-story this week revolves around Darlene, who ultimately agrees to take over for Crystal as a cocktail waitress at a nearby casino. Becky, meanwhile, contemplates a return to school after Darlene presents her with a brochure for a two-year hotel and restaurant management program.

What did you think of “Netflix & Pill”? Drop a comment below. (Looking for our next recap? Read about Roseanne Season 10, Episode 9 here.)