This week’s Roseanne finds the title character in fear of her new Muslim neighbors.

The episode makes no ifs, ands or buts about it: Roseanne’s paranoia stems from years of watching Fox News. She’s convinced Lanford’s new residents are part of a secret terrorist sleeper cell and have come to blow up the neighborhood. Jackie assures her she has nothing to worry about, but it’s not until she meets the neighbors that she begins to recognize her own ignorance.

Roseanne and Jackie are forced to confront Samir and Fatima at 2 am, when their wifi goes down minutes before Mary is scheduled to Skype with Gina (The Mindy Project’s Xosha Roquemore). They venture over with a baseball bat and explain their predicament. Fatima suggests the wifi will work better at their house, and offers to let Mary come over and use their computer. Roseanne, however, is hesitant to accept their generous offer. Moments later, Samir and Fatima’s son comes to the door in a bulletproof vest. Fatima explains that some of the neighbors have been yelling some pretty terrible things at them, and their son’s been having nightmares; the vest helps him feel safer. She then offers Roseanne and Jackie their American-as-apple-pie wifi password: GoCubs.

The next day, Roseanne runs into Fatima at the grocery store checkout line. Fatima hands the cashier her EBT card, but there’s insufficient funds. “Maybe the American tax payers forgot to fill it up,” the checkout girl quips. Roseanne then offers to pay for the rest of Fatima’s groceries, and the checkout girl responds with a bigoted statement: “Maybe you can help her carry her groceries out to her camel, too.” Fatima exits, and Roseanne gives the cashier a piece of her mind:

“You know that saying, ‘See something, say something?’ Well I saw something, and I’m gonna say something to your manager,” she says. “You’re ignorant. That woman is twice the person you’ll ever be, and she’s dealing with a lot of stuff that you don’t even know about. So next time she comes into the store, you keep your mouth shut. She has enough fertilizer to turn this place into a smoking hole in the ground.”

As the episode draws to a close, Roseanne is awakened in the middle of the night by a knock at the door. It’s Samir, who’s come to thank Roseanne and pay back the $30 for the groceries. “Did you have to bring it back at two in the morning?” she asks. “Oh yes,” he replies, with a grin suggesting they’re now even. 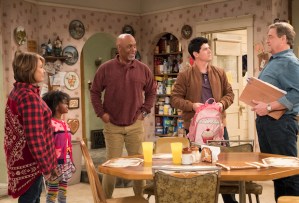 * Dan and Chuck (Grey’s Anatomy‘s James Pickens Jr.) lose out on a drywall gig when their employer decides to use undocumented, nonunion workers instead.

* D.J. reveals to Dan that he’s been seeing a therapist ever since he got back from Syria. He wanted to reenlist, but the Army wouldn’t take him. Both out of work, father and son decide to go into business together repairing motorcycles to make ends meet.

What did you think of “Go Cubs”? Drop a comment below. (Looking for our next recap? Read about Roseanne Season 10, Episode 8 here.)