The episode picks up in the middle of the night. Roseanne’s knee goes out while she’s on the toilet, and Dan runs in to retrieve her. He asks if she’s booked her knee surgery yet, but she keeps coming up with excuses. She doesn’t know how they’ll afford it, but Dan has a plan: He’s putting in the lowest possible bid on a new drywall gig — but in order for it to be profitable, he’ll have to go behind Chuck’s back and hire undocumented workers. 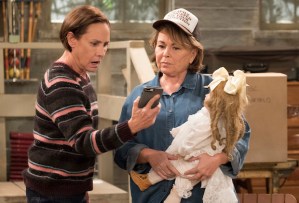 Roseanne, worried Dan will get himself kicked out of the union, attempts to find a workaround. The next day, she and Jackie dig through old boxes in the basement to try and find something of value, and stumble across an old doll belonging to Beverly, which could be worth as much as $5,000. They take it to a nearby antique shiop, but the storekeeper (played by Mom‘s French Stewart) insists it’s only worth a couple hundred bucks.

Back at home, Dan’s dealing with some serious water damage. Severe weather has flooded the basement, and the Conners don’t have the insurance to cover the costs of repair. Chuck wanders in and confronts Dan about hiring “illegals,” and Dan tells him he doesn’t have a choice. “I got three extra mouths to find since Darlene and the kids moved back in,” he says. “Roseanne’s started popping pills because we didn’t have the money to fix her knee, and now I’ve got $20,000 worth of water damage. I spent my whole life hanging on by my fingertips, telling everybody not to worry, that I was gonna make it OK because that’s my job. Well, now I can’t promise that anymore… I always told you, ‘If I’m eating, you’re eating.’ I’m not eating.” 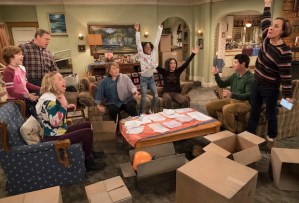 Dan eventually makes his way upstairs and joins the rest of the family in the living room. Roseanne’s checking the news on her phone and reads about a nearby nursing home that had to move senior citizens to the roof to escape flood waters. Dan insists it’s great news, then explains himself: If the government declares a state of emergency, he’ll be able to take the money provided by FEMA to repair the basement and use half of it on Roseanne’s surgery. And wouldn’t ‘ya know, moments later, President Trump takes to Twitter to does just that. (He spells “Illinois” wrong in his tweet, but Darlene says it still counts.) Afterwards, Roseanne books her procedure, which the Conner clan celebrates by surprising her with a huge family feast. 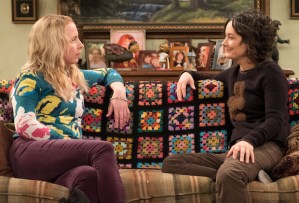 * After the FEMA money comes in, Dan forgoes hiring undocumented workers and patches things up with Chuck.

* Becky gives Darlene a few pointers to make better tips at her new waitressing job, which pretty much boil down to flirting with desperate men. By the end of her shift, Darlene’s screaming into a bar rag. To cope with her job, she returns to creative writing in her spare time.

* Among the stuff found in the Conners’ basement is an old hat belonging to the late Nana Mary (Shelley Winters) and the family’s old Halloween decorations. Roseanne tells Harris that the spook-tacular holiday used to be a pretty big deal on Delaware Street. She then recreates a classic moment, tricking her granddaughter into thinking she’s having a heart attack, only to reveal the demon spawn used by Darlene in Season 3’s “Trick or Treat.” (Fingers crossed for a new Halloween episode in Season 11!)

Grade the Roseanne finale — as well as Season 10 — via the following polls, then hit the comments to flesh out your thoughts. (Looking for our next recap? Read about The Conners Season 1, Episode 1 here.)