Get out the Pilgrim Rick hat and cue up Police Academy 3: It’s nearly time for another This Is Us Thanksgiving!

According to the official synopsis, this Tuesday’s episode (NBC, 9/8c) finds the present-day family having an “unconventional” holiday dinner — and that’s saying something, given that they’ve spent it both in a fleabag motel and locked in emotional turmoil over long-held secrets — while the past storyline shows Jack, Rebecca and the kids spending Turkey Day with Miguel.

We quizzed series stars Mandy Moore, Melanie Liburd and Logan Shroyer for scoop on the festive hour. So go ahead, roll some cheese-wrapped hot dogs in cracker crumbs and read on for the cast members’ delicious teases.

INTRODUCING THE RIVAS | “Thanksgiving may bring out some of Miguel’s family for the first time,” Moore told us, echoing something co-star Jon Huertas said while discussing Season 4 at Comic-Con in July: “Miguel has kids that are out in the ether, somewhere. We’ve gotta find out why him and his kids aren’t very tight.”

A HOLIDAY ABROAD | Kevin and Zoe won’t be home in time to carve the bird, Liburd shared. “I can’t really give too much away without giving spoilers, but yeah, they’re still carrying on their adventure in Vietnam, finding out more information and seeing what else they can do whilst they’re there.” 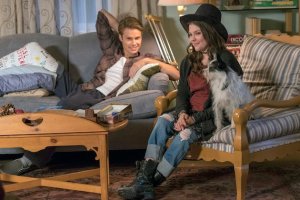 WHO’S READY FOR A 3.4-MILE WALK? | Though this Thanksgiving episode looks different from how we’ve seen the family celebrate before, there’ll be little payoffs for those who’ve watched from the beginning, Moore promised. “There’s still a nod to the traditions that the Pearsons started during the ‘Pilgrim Rick’ episode that we saw in the first season,” she said.

A MEAL BOTH BITTER AND SWEET | Shroyer, who plays teenage Kevin, said filming the family dinner was one of his favorite days on set — partly because of the subject matter, and partly because it was one of the few times this season that he hasn’t had to play Kevin in the crushing aftermath of Jack’s death. However, the meal is Jack’s last Thanksgiving sit-down with his loved ones. “What was really interesting about it was the actuality of this scene, which when you think about it is terribly sad, because we’re having such a good time,” he explained. “I’m not sure if it’s going to make it in there, but there were a couple of words that Milo [Ventimiglia, as Jack] said and it was like, ‘Yeah, in these Thanksgiving times, you reflect and you think about the future.’ This family is thinking about its future, and they don’t know at this time, but we know as the audience that Jack’s going to die and that the family is going to be broken apart.”

He added: “The more happy this scene was, the more sad this actually is.” — With reporting by Diane Gordon