Well, congratulations This Is Us: You finally broke Randall.

The most earnest, tightly-strung Pearson sibling is also, as it turns out, the member of the family who’s the most excited about Thanksgiving. So it’s doubly sad when his favorite holiday of the year, and his enjoyment of the atypical family traditions that go along with it, are marred by the realization that his parents lied to him for years.

Yep, “Pilgrim Rick” is the episode in which Randall learns the truth about William and Rebecca’s relationship. And it’s ugly. Like, send-Tess-and-Annie-upstairs-while-the-grownups-fight-and-cry ugly.

On the upside: William manages to shake a little sense into yet another member of the New York theater scene, and Kate comes to a life-changing realization aboard an airplane.

Read on for the highlights of “Pilgrim Rick.”

BLESSING IN DISGUISE| In a flashback to when the kids are 8 years old or so, pretty much everyone is dreading the annual visit to Rebecca’s parents’ house for Thanksgiving. Kate hates the itchy turkey sweater her grandmother made, which Rebecca is forcing her to wear. Randall hates the fact that his grandparents are a microagression factory when it comes to their black grandkid. Rebecca hates that her cranberry sauce has to be “perfect” to earn her mother’s approval. And Jack hates that the Pearsons can’t have their own family holiday celebration at home.

The already-tense day starts to go downhill when the cranberry sauce is ruined before the gang even steps outside. Then their car blows a tire and runs off the road; everyone is shaken, but fine. When no help arrives, they’re forced to walk 3.4 miles to the nearest gas station… where they’re told they can’t get a tow until the morning. And when Rebecca gets into a shouting match with her mom while calling for a ride, she makes an on-the-fly decision that her family will not be joining the festivities that year. Jack is so psyched, his mustache practically does a touchdown dance. When they both notice a motel across the street, it’s decided: “I guess we’re having Thanksgiving at the Pinewood Lodge.” 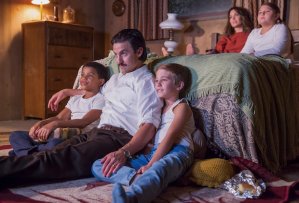 THANKSGIVING WITH MAHONEY AND HIGHTOWER | That establishment is run by a creepy front-desk clerk wearing a black hat with a buckle; he likes to be referred to as “Pilgrim Rick.” And the room he assigns them is rife with taxidermy and an overzealous furnace, but scarce on television channels or anything else even resembling fun. Jack good-naturedly turns the less-than-awesome situation into an adventure by snagging Rick’s hat and returning to the room — in character — with sticks and a copy of Police Academy 3. They’ll skewer the hot dogs they bought at the gas station and heat them over the furnace’s flame (eew, a little, but whatever), then wrap them with Kraft cheese slices and roll them in crushed Saltines (also from the gas station). Then they’ll spread a blanket on the ground and watch the movie while they eat the improvised cheese dogs, picnic-style.

Later, when Kate’s sweater starts to fray, a much more relaxed Rebecca suggests that they each say what they’re thankful for as they unravel the offensive garment. It’s super cute. At bedtime, the entire family crowds into the room’s single bed. “I want every Thanksgiving to be like this for the rest of my life,” Randall tells his mom before they drift off.

THE TRADITION CONTINUES | Judging from the Pearson family’s 2016 Thanksgiving, it looks like little Randall got his wish. The adult Randall wakes up early and excited on the Thursday morning, bouncing all over the house in his efforts to wake up the rest of the family and get started making the feast. He’s bubbly and cheerful without grating, and it’s fun to watch, especially when he jumps on Kevin’s bed and scares the cornbread stuffing outta him.

But Kev can’t help his brother with the yams and such: He’s going into New York to pick up Olivia, whom he lured to the family feast by giving her a five-second recap of his relatives’ drama. “Don’t you want to see that up close?” he asks.

When Rebecca and Miguel show up, two things are clear: Kevin really doesn’t like his stepfather, and Rebecca has been dodging Beth’s calls because she knows they’re about William. Still, she balks at telling Randall that she had been in contact with his birth father during his childhood. “I’m not telling him today,” Mama Pearson I says to Mama Pearson II. “Not on Thanksgiving.” But Beth says if her mother-in-law doesn’t, she will.

The rest of the day unfolds with homages to that makeshift Thanksgiving of the past. There’s a 3.4-mile hike. There’s a viewing of Police Academy 3. And during the movie, Randall slips out to drive to Philadelphia — which is hours away from his New Jersey home — so he can grab some recordings William and some of his sober friends made during holidays past. “I think this may be his last Thanksgiving,” Randall tells Beth, who encourages him to go.

SUPPER SHOWDOWN | But when Randall finds the tapes at his dad’s place, he also comes across a letter from Rebecca, written when Randall was 8ish. The missive makes it clear that the two adults have been in touch multiple times; by the time Randall is back at the house and everyone’s ready for the meal, he is quietly seething.

So when it’s his turn to pass the yarn and give thanks, he drops the ball and stares his mother down. “Why is there a photo of me in a letter you sent to William’s apartment?” he asks. He’s angry. He’s crying. “You kept him from me my entire life?” Randall says, incredulous as the rest of the table is frozen. “I can’t even look at you.” He gets up from the table in disgust. “Your family is amazing,” an entertained Olivia whispers to Kevin. 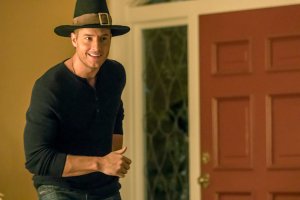 ‘THANKS FOR THE PIE’ | So, is Kevin’s co-star his girlfriend or what? At the start of the episode, she’s definitely not. And when Olivia relates how she never got to the pie course of her own half-American family’s Thanksgiving, thanks to some drama related to her father’s extramarital affair, Kevin makes sure to snag her a piece early. It’s a sweet gesture, but she runs from it like it’s a pack of bees who’ve just downed a can of Red Bull. “I can’t be who you want me to be,” she mumbles. “I should go.”

While Olivia is waiting for an Uber outside, William tries to strike up a conversation. “How does it feel to be dying?” she says, all snarky. But he answers her honestly. “It feels like all these beautiful pieces of life are flying around me, and I’m trying to catch ’em,” he says. But it’s getting harder and harder. (Side note: Wanna know why the monologue’s not printed here in full? Because it already made me cry once, and THAT’S ALL YOU GET, THIS IS US.) “I know it feels like you have all the time in the world, but you don’t,” he adds, telling her that “when a nice boy who adores you offers you pie, say ‘Thank you.'”

So she goes inside and kisses Kevin in the kitchen and slips in a quick, “Thank you for the pie.” I’m not saying this development puts Kevin in a good enough mood to let Miguel be Pilgrim Rick when the hat-wearing part of the evening arrives, but I’m not saying it doesn’t, either. 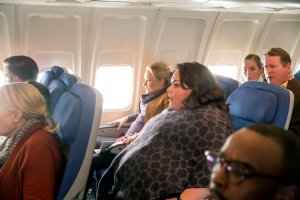 BIG CHANGES | Where’s Kate in all of this? She dumps Toby during a dinner date in the lead-up to the holiday; I’m making it sound simple and easy, but it’s really tough and Chrissy Metz and Chris Sullivan both do a really great job with the split. She explains about how terrible she felt after their last meal together, and how it led to her eating sad donuts sadly in her sad car.

“You fell for me. So now, what? You’re just gonna throw me away?” he asks, hurt. She replies that he’s better than she could’ve imagined, “but I’m still not happy, Toby,” and that her need to figure out who she is and get her weight under control is what she wants more than anything. “Even more than me?” he replies. They’re both crying and she’s barely holding it together, but the answer? Yes.

So Kate is in no mood when a lame woman gives her side-eye as she sits down next to her on a plane to the East Coast. “Don’t worry, I bought both of these seats,” Kate informs her. But when the plane hits massive turbulence, the two find themselves holding hands. The bitchy woman apologizes. “I thought I was going to die,” she says, oversharing that her husband is cheating on her and she’s just now realized that life is too short to settle for that kind of nonsense.

The incident makes an impression on Kate. When she walks into Randall’s dining room mid-meal, unaware of the awfulness that has just taken place, she announces: “I’ve decided to have gastric bypass surgery!”