Man, if you go on a trip with a Pearson, expect angst — and a serious lack of car snacks.

Tuesday’s This Is Us follows two journeys in the life of the family: Jack and Rebecca’s cross-country drive to California the week after they met, and Kevin and Zoe’s present-day, transglobal trek to Vietnam.

The hour feels big, especially in what it reveals about Zoe’s past. But it’s also captivating to watch Jack, newly returned from Vietnam and without the years of distance and defense he’s got by the time the series starts, try to sort himself out now that he’s back in the world. (Which is a fancy way to say that Milo Ventimiglia really does some fine work in the episode.)

Read on for the highlights of “Sometimes.” 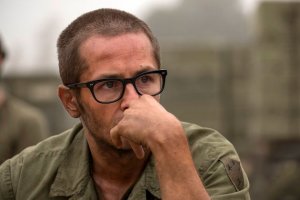 LIVE BY THE PENDANT… | In a Vietnamese workshop, we watch a woman make Jack’s medallion necklace by hand. She puts it on a chain, wraps it in newspaper, and brings it to a stall, where an old woman sells it to a young G.I…. who’s not Jack. The guy plans to give it to a woman he likes, but when he sees her at a bar with another man, he slams the jewelry down on the bar and walks away. Another soldier picks it up and puts it around his neck, and when he dies on the field, another woman — the one from Jack’s photo — strips the pendant from his corpse and hangs it around her own neck.

From there, we go to the moments immediately following Episode 4 of this season, with Nicky looking perturbed that his brother has shown up in country. Nicky allows Jack to hug him for a beat or two before angrily pushing away, muttering, “You’re not here. I’m not even here.” Jack eyes him warily, wondering what drugs his brother’s been taking. When Nicky laughs, it sounds unhinged, but Jack presses on: He’s there to get his little brother out of his terrible situation. But Nicky isn’t comforted or particularly interested, saying that he’s been charged with unbecoming conduct, and that’s no joke. Then he mocks Jack’s savior tendencies. “You’re not Superman,” he says. “It’s just a stupid nickname.”

Nicky’s commanding officer refuses to grant Jack’s request to take his brother back to his own unit, even after Jack busts out a touching story about how Nicky is so gentle, as a kid, he couldn’t bring himself to kill spiders. But the C.O. cites the military policy of not having members of the same family in the same unit, then sends Jack back to where he’s stationed — on foot.

NICKY’S C.O. COMES THROUGH | A disappointed Jack pays a local man named Bao to bring him back via motorbike, but the man makes an unscheduled stop that gives Jack pause. Bao delivers a bunch of empty tin cans to some other men; the cans remind Jack of a homemade explosive device that his unit came across in the jungle. So when Bao comes out and gestures for Jack to get back on the bike, Pearson is wary.

Eventually, Bao drops Jack by the river and tells him to walk the rest of the distance back to his men. “Are you VC?” Jack demands, wondering if his chauffeur is part of the Viet Cong. “Sometimes,” Bao says, looking regretful as he rides off.

Sometime after that, Jack sees the woman wearing the necklace — the one from the top of the episode — near his camp. And sometime after that, Nicky’s C.O., who must’ve had a change of heart, delivers the delinquent soldier to his brother’s unit for a two-week stay/rehabilitation session. 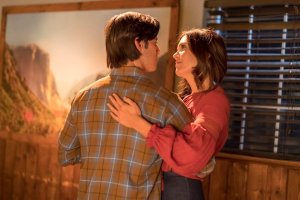 LET’S GET IT ON | In a different flashback, Jack and Rebecca set off on their trip to California. They’ve known each other a week; though the conversation flows pretty easily, there are still some awkward silences — mostly when Jack gives a one- or two-word answer to Rebecca’s frequent questions about his life. (Side note: If I were Rebecca, I’d be wondering what kind of car-snack talents Jack brings to this operation. Dude, she made you turkey sandwiches. Please tell me you’ve got a bag of pretzels or something in the backseat?)

But on the whole, they’re happy. Rebecca’s got a meeting at the record company that put out Joni Mitchell’s Blue album. And Jack’s got an appointment in Reseda, though he won’t go into detail about who he’s meeting there. At dinner the first night, after Rebecca comments on how “People don’t slow-dance nearly as much as they should,” Jack takes the hint and asks her to join him on the eatery’s dance floor. They’re swaying to Dolly Parton’s “Lonely Comin’ Down” when she notices an elderly couple and gets teary over how cute they are. When she asks, Jack says he never cries: “I’ve gotten really good at just swallowing the bad stuff.”

Later that evening, they return to their hotel room, and it’s a little awkward as Rebecca changes into her flannel grandma pajamas and she and Jack prepare to sleep in their respective twin beds… an arrangement that doesn’t last long, as we see when they wake up, naked and in his bed, the next morning.

BOTH SIDES NOW | At the next motel, they nearly break the bed (not a euphemism). In the morning, Jack is having a nightmare and whimpering a little, which causes Rebecca to wake him and wonder what’s wrong. He says he’s fine, knuckling away tears and hightailing it to the bathroom — and when she presses him on it in the car, his tone changes quickly. “Rebecca, please,” he warns, and she backs off.

They arrive to stay with her friend in California, and while Jack’s getting drinks, Rebecca truly lets her lovesick flag fly. She confides in her pal that Jack is struggling with something, and “I wish he would let me be in it with him.”

That night, before bed, Jack tells Rebecca he can’t talk about what he did or saw in Vietnam with her:”I don’t want to bring that part of my life into this, with you.” She says she understands, but when he asks if she’s planning to return to Pittsburgh, she says she doesn’t know. 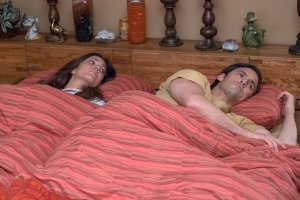 HOMEWARD BOUND | Know what changes her mind, right quick? A meeting with the record label’s A&R guy, who listens to Rebecca’s demo and tells her it’s “beautiful,” but then basically boots her out of his office. I’m very proud of little Becky when she presses him for more specific feedback… but when he says that she’s “Pittsburgh good,” you can almost see her physically stumble as the faint praise hits her like a cannonball.

Meanwhile, Jack’s Reseda mission is actually a visit to the parents of a”Squirrel,” soldier who died during the firefight we saw in Episode 4. After introducing himself, Jack tells Mr. and Mrs. Watterson that he’s responsible for their son’s death. “I let my guard down. I failed many times when I was over there but taking my eye off your son, that was the worst thing I did,” Jack says. “I take full responsibility. And I know it may not mean much, but I needed to come here and tell you that he was one of the good ones. And that I am sorry.”

The parents are very moved by what Jack says, but they’re not angry at all. In fact, Mr. Watterson goes over and puts his arm around Jack, saying, “It wasn’t your fault, son,” while Mrs. Watterson echoes the sentiment. Jack is nearly overcome, but he holds back. You can see the effort.

And when he picks Rebecca up and hears about what the label guy told her, he asks her to sing the demo song for him, right there in the car. She does. When she sings the lyrics “All my mistakes were forgivable,” Jack loses it. He turns his face away, holds his fist to his mouth and tries not to show her that he’s crying. She stops momentarily, fully aware of what’s going on, then continues while he silently weeps. (Side note: See what I meant about Ventimiglia there?)

When she finishes, Jack takes her hand. “C’mon,” she says as he wipes his eyes, “Let’s go home.” He agrees. 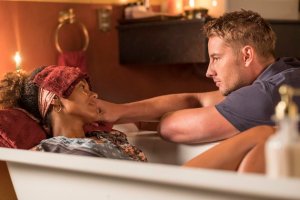 ‘THAT’S A LOT OF BAD BAT’ | In the present, Kevin and Zoe arrive in Vietnam — another flash-forward accounted for! — where she’s all about soaking up the local culture and not at all about answering Kevin’s questions about her childhood. Meanwhile, he sees a tourist wearing his dad’s medallion and soon realizes that they’re mass-produced, which means Jack’s necklace doesn’t have some “epic origin story.” He’s testy about it, which makes him pick a fight with Zoe while they’re out for a walk. Though she’s sweaty and pale, he decides to go all in on why she won’t tell him about her life before she moved in with Beth at age 8. And when she says she’d like to go back to the hotel to lie down, he thinks she’s sulking… until she throws up her lunch of bat soup (a local culinary treat!) against a tree. “Oh wow,” says a chagrined Kevin, “that’s a lot of bad bat.”

While Zoe hunkers down in their hotel room’s bathtub (her explanation that “It’s the safest place for me right now” made me laugh and grossed me out at the same time), Kevin brings her coconut water and explains that Jack hiding his fundamental years from Rebecca worked for them, “but I don’t want that for us.” However, if Zoe is determined not to share her whole history with him, he thinks that’s OK, too. “I’m falling in love with you, whether you open up to me or not,” he confesses.

Then Zoe reveals that her father sexually abused her, and she has no real relationship with him nor desire for one. What’s more, “I’m not telling you this because you asked me to, or because you told me you’re falling in love with me. Or even because I’m falling in love with you, too. I’m telling you this because my father has already ruined so much for me, and I’m not going to let him ruin this, too.”

Kevin, dumbfounded, stammers that she always seems so strong. “I am strong,” Zoe says, and HELL YEAH WOMAN YOU ARE.