Randall Pearson’s City Council campaign gets a much-needed boost from an unlikely source in this week’s This Is Us. In related news:

Who knew that The Manny — or rather, The Baby Man — was such a hit in South Korea? And who would have ever guessed that, of all the Pearson triplets, Kevin would be the one who knows how to say “thank you” in Korean?

Confused? Don’t worry, I’ll explain. We’ll also explore how Beth makes a career decision that we’re supposed to love (but I have some misgivings) and how Kate spends the whole hour waiting for Toby to get out of bed and Audio to take a poop (both are more significant than they appear at first glance).

Read on for the highlights of “Kamsahamnida.”

A ROCK IN A HARD PLACE | Kate’s good-and-bad news travels quickly through the Pearson grapevine: She’s pregnant (woo!) but Toby’s smack in the painful middle of a depressive episode (ouch). As Rebecca, Miguel, Randall, Beth and Kevin learn and share updates, we become aware that Toby has been back on antidepressants for two weeks but hasn’t seen any improvement.

Indeed, when we see Toblerone, he’s in bed, telling Kate he’s tired and turning down the idea of taking their pup, Audio, out for a walk. Kate is trying to roll with everything, she tells Rebecca on the phone while they’re at the park, but she’s worried. Then Audio eats a rock, and things get more complicated.

Back at home, Toby yells at Kate for letting the pooch get into some garbage, but he immediately apologizes. Kate ferries the dog to the vet who suggests surgery but says she also can take a wait-and-see approach, and maybe the dog will clear the foreign body on his own. Scared and freaking a little, Kate calls Rebecca for advice and laments that she’s going to need her mom to live in her building once the baby is born. Rebecca gently counters that she’s happy to offer her opinion, but Kate will just do what all mothers — herself included — always does: Make a decision and hope for the best.

So Kate brings Audio back to the apartment. She’s pleasantly surprised to see Toby up, showered and dressed, which seems like progress, right? Nope, Toby sadly tells her: He thought going through the motions would make him feel more normal, but it didn’t, and now he’s even more afraid that she’ll think he’s a burden and that she’ll eventually leave him. He starts to go back to bed, but when Audio scratches at the door like he has to go potty, Kate firmly but gently informs her husband that she thinks it would be good if he accompanied them on a walk. Toby considers that a moment, then says, “OK.”

Outside, Kate reminds Toby that “I signed up for better or worse” and vows that she’s around forever. Plus: She’s spent her whole life needing to be taken care of, and her trials have made her more than strong enough to support him in his time of need. “You’re incredible,” he says. Then Audio drops a deuce, clearing the rock, and all is well. 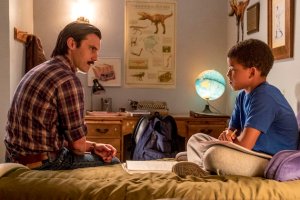 AGAINST THE ROPES | In a flashback to when The Big 3 was in elementary school, Jack comes home from the boxing gym with a black eye. (And also with a baseball cap perched on his head in a way that no sober person has ever worn a baseball cap, kind of drawn down on one side to hide his shiner from Rebecca. Reeeeal slick, Jack.) Of course, Mrs. Pearson instantly notices her husband’s injury, and she’s shocked to learn that he’s been sparring instead of just hitting the heavy bag. She makes him promise that he’ll stop fighting other people, and he reluctantly agrees.

Later, Randall comes to his dad to ask for help: A bully named Dylan is picking on him, and Randall wants some rudimentary boxing skills in his back pocked just in case he ever needs them. So Jack teaches his son the basics, which earns him Rebecca’s ire once she finds out. She calls the school to get to the bottom of the problem… and learns that there is no Dylan enrolled there. Randall sheepishly confesses that he invented the problem because he wanted Jack to teach him, and he knew he wouldn’t without a good reason.

But more heartbreakingly, Randall wants to learn to fight because he feels like there are things — such as toughness — that Kevin got via Jack’s DNA and Randall didn’t. Jack assures him that’s not the case, and that Randall’s brain is his secret weapon that he’ll be able to use the way Kevin uses his wrestling moves. And if you think that’s not going to manifest itself in the present-day storyline at some point during the episode, you haven’t been watching This Is Us for very long, have you?

In a quiet moment, Jack explains to Rebecca why he feels the need to spar. “Boxing helps me, OK? It helps me with stuff, stuff I can’t think about. It quiets things,” he says, at a loss to explain it any better. But she understands. So she comes home with headgear for him to wear and asks him to try and be safe while working out his demons. Then Jack tells a story about learning to box with his younger brother when they were kids — from the look on Rebecca’s face, this kind of Nicky-related reminiscing doesn’t happen very often — and then he gives her an impromptu boxing lesson that ends with them in a kiss.

COOKIE CRUMBLES | While Randall is at church in Philadelphia, Beth supervises Tess and Annie’s plan to sell Girl Scout cookies at a table outside the grocery store. Deja tags along. The endeavor is doomed from the start. They arrive at the location too late, and another group already has set up shop. Then they don’t have a credit-card swiper, so their sole customer can’t pay. Then Tess is a jerk to her mom, telling her that she sucks, and the whole thing pushes an already on-edge Beth to her limit. “Shut up, shut up, shut UP!” she snaps, and hustles the girls home.

After she’s calmed down, Beth gets a pep talk from Deja, who instructs her to tell Randall how she’s really feeling. “He’ll tell you that you’re exceptional, and he’ll say it to easy that you’ll believe it,” the teen advises. “Wow, you are really good at these talks,” Beth says. “You live in this house for a while, you learn your way around a talk,” Deja answers. On a related note: I LOVE HER. 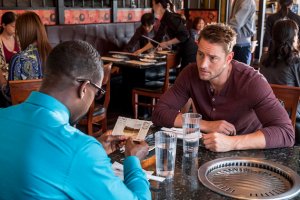 BOOK OF REVELATIONS | Randall’s church visit goes south when Councilman Brown, who’s up in the pulpit to read some Bible verses, takes a moment to welcome his political opponent to the congregation. Though Brown’s words are kind, his intention is not: He very slyly points out to everyone assembled there how unknown and untested Randall is in both the community and the house of worship.

Afterward, Kevin calls his brother, wanting to meet up and more than willing to go to Philly to do so. (Side note: This is not a thing a normal person would do — especially if Randall were planning on returning to his Alpine, N.J. home, which is much closer to New York than Philly but still not close at all, later that day.) Already feeling like an outsider in the neighborhood, Randall has his “white, movie-star brother” meet him in a Korean restaurant in another part of town.

There, they discuss Kevin’s obsession with figuring out who the Vietnamese woman is in Jack’s photo. “I’m curious about Dad, too. But Vietnam, that was a chapter in his life he didn’t want us to know about. He made that very clear when he was alive,” Randall says. Their conversation gets tabled when Randall realizes how everyone in the place is fawning over Kev: Turns out, The Manny is VERY big in South Korea. “I think I’ve got a K-pop song named after me,” Kevin says, thanking the waiter in Korean by saying “Kamsahamnida.” Randall is floored.

STRATEGY SWITCH-UP | The meal gives Randall an idea: Focus on his district’s predominantly South Korean neighborhoods, which are highly populated but which have low voter registration numbers, instead of trying to change Brown-loyal hearts and minds elsewhere. Kevin is willing to help. And so the two of them throw together a voter-registration drive/campaign event in a neighborhood full of Korean Philadelphians.

It’s going well until a millennial man steps up and (correctly) calls Randall out for vote-grabbing where he knows he might get them. The man starts to usher his mom and sister away, but Randall steps up and addresses him. And when the sister starts to translate Randall’s remarks into Korean, the whole place is listening.

Basically, Randall says that he sees a community in need and he wants to be the one to help, if the people will talk to him. Then he mangles “Kamsahamnida,” but his meaning is clear. The millennial’s mother — and a bunch of others — are charmed. Back at the campaign office, the young man returns to say that his mother registered to vote that day — something she’d never felt was important before — “because you made her believe that you care.” Turns out, the guy has a master’s degree in political science and experience working a campaign, and he wants to be Randall’s campaign manager. Randall exuberantly agrees.

Then he swings by Brown’s office to tell him that he knows exactly what the older man was doing at church that morning — and it didn’t get to him. Using a boxing trick Jack taught him, aka smiling through the pain, Randall informs Brown that he’s going to win Koreatown.

BETH GETS A JOB! | Randall then runs home to tell Beth the good news, but she is a glass of wine into her truth and IT WILL WAIT NO LONGER. “For the past few weeks, I have been pretending that I’m fine. But I’m not, babe. I’m not fine,” she says, waving off his attempts to buck her up about how lucky any office would be to have her. So he switches tactics: “Join my campaign.” She instantly says no, fearing it’s a pity offer, but Randall works his magic, and soon she’s all in. “Let’s win you an election,” Beth says.

It’s a moment of joy for the Randall-Beth fan in me, because who doesn’t love watching those two — as Randall puts it — crush it? But is it mean of me to want Beth to have a role in addition to supporting Randall in his latest quixotic escapade? (It probably is. Oh well. Tell me what you think in the comments.)

PACK YOUR BAGS | Meanwhile, Kevin interrupts Zoe’s solo night of pampering at a local hotel to bring her a visa application for travel to Vietnam: He’s going, and he wants her to come with him, even though it’s an intense and long trip for a couple that hasn’t been dating that long. But she’s intrigued, either by the subject matter or his zeal or both, and she happily accepts the invitation.