Just when you thought Riverdale had cornered market on gargoyles, along came Thursday’s Legacies to remind Archie & Co. what a real monster looks like.

After waking from a who-knows-how-long slumber in the final moments of last week’s episode, the Salvatore Boarding School’s resident gargoyle wasted no time terrorizing the student body — specifically Lizzie’s body, which began turning to stone after she was attacked by the walking lawn ornament. (Maybe that will teach her to listen to Pedro!) After surviving an encounter of his own, Alaric discovered that the gargoyle was only attacking other supernatural creatures, those it perceived as threats. This little revelation bought Hope and Josie enough time to combine their powers and blow the damn thing to bits.

And in the students’ defense, their day had already been crazy dramatic. As punishment for brawling with the townies after last week’s “friendly” game of touch football, everyone was sentenced to an afternoon of community service in downtown Mystic Falls. MG hooked up with Dana, someone dumped a milkshake on Lizzie, Hope impaled herself in the damn foot… it was a lot. 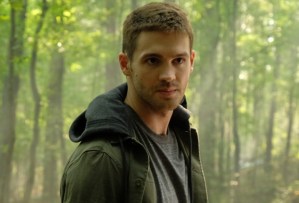 Meanwhile, Rafael and Landon Kirby were beginning to wonder if they’re really cut out for life in the forest, as not everyone can stomach the Stefan Salvatore Woodland Creature Diet™. And Rafael’s little get-rich-quick scheme, performing supernatural tricks on the street for money, earned the attention of none other than Jeremy Gilbert, who ended up saving the duo from an actual werewolf hunter. With a fresh perspective, Rafael and L.K. made their triumphant return to school, where the latter immediately shared an intense moment with his old flame.

“When they see each other at the school at the end of this episode, that was one of my favorite moments we’ve done so far,” Danielle Rose Russell tells TVLine. “I love how charged that moment is between them, and that Hope breaks away. You see a visual representation of what their relationship is like.” And that relationship isn’t going to get any easier anytime soon. “They go through a journey,” Russell says. “We’re shooting Episode 10 now, and they’re still going on a journey.”

As for Hope’s relationship with Josie, which appeared hopeful this week as the two swapped stories about boys and black magic, Russell says there’s more bonding to come. “They complement each other in such nice ways,” she says, “so I think that friendship could be great for both of them. They need each other, and you’ll see that develop a bit more. Of course, Lizzie hates it — she hates every moment of it. It’ll be up and down for a while, but this episode gave you a taste of what could be.”

And if the sight of a gargoyle walking the hall of the Salvatore Boarding School was too much to handle, just you wait. “We have so many more amazing monsters,” Russell says. “And the monsters start to make a little more sense. They fall into place, and you learn why they’re appearing. It seems crazy right now, but trust me, it will all makes sense.”

* Something about hearing Hope refer to “my Aunt Freya” just made me so happy. I wouldn’t be the least bit surprised if Riley Voelkel makes an appearance before the end of Season 1 — which was recently upped to 16 episodes — especially considering she’s still in the Plec-verse via her recurring role on Roswell, New Mexico.

* Oh, and when Josie told Hope, “We all used to say how beautiful [Hayley] was,” I just… I couldn’t even handle it.

* I didn’t think I could love MG more, but then he questioned whether he was taking advantage of Dana (“My mama didn’t raise me like that”), and I fell even deeper.

* As much as I’d love for everyone to hold hands and sing “Kum ba yah,” I’m also really entertained by Lizzie’s petty sniping. When Hope offered to pick up trash and Lizzie replied, “Good, it suits you,” I was floored. Savage.

* I don’t exactly disagree with Kaleb’s sentiments about vampires being “faster and stronger” than humans, but I’m a little concerned. The last thing Mystic Falls needs is another species war. (Also, “vamps before tramps”? Really, Kaleb?)

Your thoughts on this week’s Legacies? And which vampire do you think killed Dana? (Whoever it was, I hope they screamed “Not now, Dana!” before they drained her.) Whatever you’re theorizing, drop it in a comment below.