The Good Doctor was ultimately unable to prevent a flesh-eating bacteria from destroying the career of up-and-coming violinist Jas Kohli, who came to the ER with an infected finger and left San Jose St. Bonaventure without an arm.

In Season 2’s sixth episode, it was Morgan’s determination to make sure Jas’ dreams weren’t taken from her that eventually cost the gifted musician a limb. But before we get star Fiona Gubelmann’s take on the matter, a brief recap of the hour… 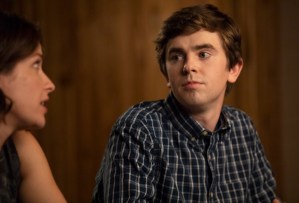 * Struggling to adjust to Shaun’s myriad idiosyncrasies, Lea turned to Glassman for advice. He reminded her that Shaun would never ask her to change, and she shouldn’t expect him to change, either. The new roommates later agreed to cut each other some slack while they adjust to this new dynamic.

* Just as his second date with Debbi was getting hot and heavy, Glassman lost his balance and took a fall. He then asked Debbi to leave, embarrassed by the ongoing side effects from his brain surgery.

* Despite Park’s advice, Claire refused to apologize to Melendez. She instead worked on a teenage patient whose worsening symptoms were revealed to be the result of a Lego (!) that she swallowed as a small child. It never made its way through her digestive tract and instead got lodged in her lungs, causing a weakening of her immune system.

* Not only is Park divorced, he’s also a dad! This much was revealed during a conversation with Claire, during which he maintained that he likes to keep his personal life private. (Speaking of which, see Question No. 8…)

* During the hour, we also got our first taste of Morgan’s backstory. While working on Jas, the MD revealed that she previously dabbled in archery — seven days a week for seven years. But she eventually stopped when it was time to attend college.

Below, Gubelmann — who, in Part 1 of our conversation, revealed that her character’s backstory will continue to unfold — discusses the impact that Jas’ loss has on Morgan.

TVLINE | Morgan’s reluctance to hear Shaun out on the case ultimately costs Jas both her arm and her livelihood. How does this impact Morgan moving forward, if at all?
The thing about Morgan is, she’s someone who gets knocked down, then wipes the dirt off, gets back up and keeps fighting. That’s a testament to her character. So in this episode, she is devastated by what happened to the patient, and she might even be more upset with herself for not seeing what Shaun saw, but Morgan’s going to get back up and keep going.

TVLINE | Do you think Melendez’s pep talk there at the end (during which he revealed his own med school rivalry with Dr. Lim) helps Morgan put things into perspective?
I think it’s definitely helpful, because he’s basically telling her that it’s not about competing with other people. It’s about competing with yourself. It’s really just working towards making yourself the best that you can be and forgetting about [everyone else]. I think that’s great advice for her, because so often she’s focused on competing with [her fellow residents] that it prevents her from becoming friends [with them]. So now, maybe, she’ll move past that and be more of a team player. 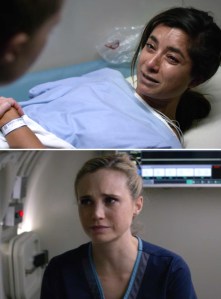 TVLINE | Talk to me a bit about what it was like shooting that scene in the hyperbaric chamber where Jas finds out about the amputation and blames Morgan for her loss. Was it as heartbreaking acting out the scene as it was when you first read it?
Oh man, it was absolutely horrible shooting that scene. [Laughs] Not only was the hyperbaric chamber incredibly small and claustrophobic, but the actress who plays Jas [Supinder Wraich] did such a fantastic job portraying [her character’s] devastation. It was so easy to act off of her because I felt like I was really in a situation with someone who was waking up to find out this horrible news, and that her dreams were gone forever.

TVLINE | And it’s the first time we get to see Morgan express any sort of real, raw vulnerability, and we get that great shot from Shaun’s perspective of Morgan fighting back tears. When you read that in the script, were you like, “Finally!”?
[Laughs] Well, I’ll tell you the truth. It was not written for her to be that emotional… That was something that I found in that moment, and I just felt like her fighting back those tears… felt right there. Originally it was just written that it was very hard to watch, but just based on everything I was getting from the actress, that’s what felt right.

TVLINE | The synopsis for next Monday’s episode says that Shaun and Morgan “must contend with two brothers who are bargaining over life and death.” That sounds even more intense than this week’s episode!
What’s fun about the next episode is that Morgan gets pretty fired up. She’s less emotional, but more intense about her beliefs about what someone should and should not be doing. And you get to see a stronger, more confident side of Morgan when dealing with the patients. And it’s definitely one where Morgan starts to work as more of a team player.

What did you think of The Good Doctor Season 2, Episode 6? Hit the comments with your reactions!