Beginning with Monday’s episode of The Good Doctor (ABC, 10/9c), fans will get to see the often rigid, opinionated Dr. Morgan Reznick let her guard down — but not all at once.

In Season 2’s sixth episode, Shaun and Morgan treat Jas Kohli, a young violinist who comes to the emergency room with an infected finger — and the decisions that Morgan makes have the potential to make or break the gifted musician’s career.

Below, Fiona Gubelmann previews Morgan’s most intense case yet, and why she’s excited for the series to delve into her character’s previously undisclosed backstory.

TVLINE | Before we get into this week’s episode, let’s talk big picture. Since her introduction, Morgan has created tension for everyone on Melendez’s team. How has it been for you to play this character that viewers love to hate?
She’s the most stimulating and complex character I’ve ever had the opportunity to play. I love her strength, her intelligence and her confidence. I’m used to playing characters that are more bubbly, more likable, so playing someone who fans hate — and love to hate — is definitely a huge change for me.

TVLINE | Those Twitter mentions can be brutal, right?
It’s very odd to go on social media and see people write things like, “I hate you,” or “I love to hate you.” Even when people just say “I hate you,” I have to say to myself, “Well, OK, I’m doing my job, and I’m doing a good job.” [Laughs]

I remember in my first episode [back in Season 1], there was a lot of tension between Morgan and Claire, and I remember I was so nervous that Antonia Thomas would think I’m really like Morgan, so I kept apologizing to her. She’d just laugh and say, “I know this isn’t you.”

TVLINE | Without giving too much away, this is the first episode that delves into Morgan’s past. It’s not much, but it feels like a small taste of what’s to come.
Absolutely… With every episode from here on out, there are going to be little pieces of her that are revealed — pieces of her backstory, development in her relationships with the other characters… we’re really going to start to understand who she is, and why she acts the way that she does. You start to learn, too, that her competitive side comes from more of a playful nature. I think people assume that she’s competitive in a negative way, but she’s never trying to sabotage anyone.

TVLINE | Right, which I think was already evident in Season 1. She obviously wanted Jared’s spot on Melendez’s team, but she was willing to put in a good word for him in Denver. Why else would she do that?
Well, the thing about Morgan that fans don’t like is— I mean, one, it’s interesting to play this brilliant, driven, unapologetic woman because I think that that’s something that definitely ruffles people’s feathers. The other thing is that Morgan is blunt and says things the way that she sees them and doesn’t sugarcoat anything. She often gives unwanted advice, or unasked-for opinions that upset people. She saw with Jared that the hospital was not going to move past what he did, so she said to him, “Look, it’s not going to get better for you here, so let me help you get this opportunity somewhere else, because that’s the only way for you to really move on.” 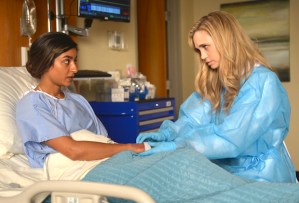 TVLINE | Why do you think Morgan connects with this week’s patient?
Morgan definitely sees a bit of herself in [Jas], especially in terms of her passion, her ambition, her drive… and those are qualities that Morgan has in spades. When she sees that drive, she connects to that and really wants to help make the patient’s dreams come true. She doesn’t want to make choices that could take away this girl’s future.

TVLINE | Is it exciting to see Morgan open up and allow herself to be vulnerable?
What’s so great about this episode is we really start to see more to Morgan than what meets the [eye]. So far we’ve seen this super rigid, more put-together character that Morgan has been wanting people to perceive her as, but in this episode, her walls really start to come down and you see her get emotionally invested… You really get to see a different, softer side to her that I’m really excited for the fans to see.