To borrow a phrase from another David Shore medical drama, Fiona Gubelmann’s Dr. Morgan Reznick proved to be quite the “cutthroat b—ch.” She immediately made clear to Claire that they weren’t going to be friends, and did everything in her power to undermine her fellow resident in front of Melendez.

The immediate rivals got stuck working together after the doctors were split among two teams and forced to compete. The men (Shaun and Jared) worked with Lim, while the women (Claire and Reznick) worked with Melendez to treat a recently widowed father with a ruptured appendix. In recovery, he developed a C. diff infection brought on by years of taking leftover prescription meds. Having built a tolerance, he was now resistant to all medications necessary to combat the infection, and without the proper treatment, he’d be forced to live the rest of his life with a colostomy bag. Claire eventually came up with an alternative form of treatment — an experimental procedure known as a fecal microbiota transplant — which proved successful. 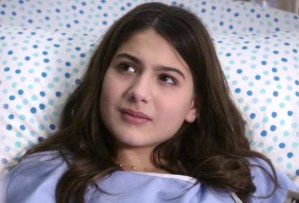 Shaun and Jared, meanwhile, treated Quinn (Transparent‘s Sophie Giannamore), a ‘tween who was born male, but now identified as female. Quinn was found to have testicular cancer, which fortunately had not yet spread beyond her left testicle. To save her, the surgeons would perform a radical inguinal orchiectomy, removing the cancerous organ entirely.

Quinn was also diagnosed with low bone density, brought on by the puberty blockers she was previously prescribed to prevent an increase in male hormones. Worried about progressing into an adult male without them, Shaun went ahead and suggested they do a bilateral orchiectomy instead, removing both of her testicles instead of one. This led to a potential legal battle between members of her family.

Unlike her parents, Quinn’s grandmother (played by Private Practice alum JoBeth Williams) insisted that her grandson was just “going through a phase.” She threatened to contact child services if her daughter and son-in-law OK’d the bilateral procedure. Later, when a testicular torsion forced the ‘rents to make an immediate decision, they chose to have the surgeons remove only the cancerous testicle.

Afterwards, Andrews told Quinn that it was his decision to remove just the one organ, affording her parents the opportunity to continue supporting their transgender child without having to be resented for years to come. Lim told Quinn that she’d be able to receive hormone treatments in place of her puberty blockers, and Andrews promised that he’d perform her gender confirmation surgery as soon as she turned 18.

Shaun, who spent much of the hour struggling to comprehend what it meant to be transgender, asked Quinn what it felt like to be a girl:

“When my parents let me be me, it felt like I didn’t have to pretend anymore,” she answered. “I felt free, like when you’re in a pool and just float.” 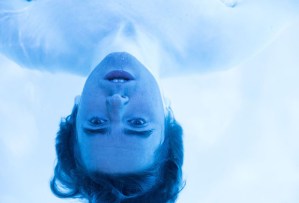 Shaun responded, saying, “I’m not a very good swimmer… I don’t know what it feels like to be anyone but me.”

Later, Glassman tried to mend fences with Shaun and be his friend. He offered to take him to dinner and give him a lift back to his apartment, but Shaun wasn’t in a forgiving mood. Instead, he returned home on his own and asked Kenny to pick the lock to the building’s indoor pool. There, he floated in the water in an attempt to feel the sensation that Quinn previously described to him back at the hospital, bringing things full circle as the episode drew to a close.

The hour’s C-story involved Andrews, who visited a fertility clinic with Isabel only to discover that their chances of conceiving a child were slim to none. He blamed his wife for putting her career ahead of starting a family until it was too late (because he’s a jerk), then learned that his low sperm count was to blame (because karma, I guess).

What did you think of “She”? Drop a comment below with your reactions to the episode.