This week on The Good Doctor, Shaun and Lea redefine their relationship, while Glassman struggles with his post-op recovery. Claire, meanwhile, has an error in judgment.

We begin the episode at Shaun’s place, some time after he’s told Lea that he rented them a two-bedroom apartment. Shaun is getting ready to leave for work when Lea confronts him and says that she doesn’t think it’s a good idea. “If we get an apartment together, I feel like that’s a signal that you and I might end up as boyfriend and girlfriend, and that’s not going to happen,” she says. “Romantic relationships are unpredictable. So much can go wrong, especially when I’m involved.” But more importantly, “anything that puts our friendship at risk isn’t worth it to me.”

The following morning, Lea surprises Shaun with his security deposit, having convinced the building manager to let Shaun out of his deal. But Shaun maintains that he and Lea should live together, no strings attached. “You told me we can’t be boyfriend and girlfriend,” he says, but “we can still be friends with benefits. The benefit is we’d be living together.” (Heh!) The next day, he wakes Lea and informs her that he’s paid an additional $300 to secure the apartment, and explains that living together will be good for him. Lea makes it clear that her mind’s already made up, but eventually has a change of heart. When Shaun returns home later that evening, she tells him exactly what he wants to hear. She again stresses that she doesn’t want anything to ruin their friendship, but trusts that Shaun can handle the new dynamic.

While at the hospital, Shaun spends much of his time concerned about Glassman’s post-op recovery. The former hospital head has yet to move his bowels or get out of bed for physical therapy, and Shaun worries that his mentor is making himself susceptible to infection. Shaun turns to Dr. Blaize for advice, who explains that Glassman doesn’t want to appear weak in front of people that used to work for him, hence his refusal to take a lap around the floor. She also suggests that Glassman needs something to motivate him to get out of bed. 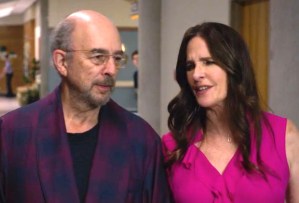 This leads Shaun to the cafeteria, where he converses with none other than Debbi. Shaun at first brings Glassman a muffin, but leaves it by the nurses’ station in hopes that it’ll entice the doctor-turned-patient to get up and retrieve it. When that fails, Shaun goes with Plan B and has Debbi pay Glassman a visit. She apologizes for keeping her distance since his diagnosis, then manages to get him out of bed for the first time since his surgery.

* Melendez, Claire and Morgan treat anorexic patient Louisa DeLeon (24 vet Reiko Aylesworth), who is rushed to the ER and diagnosed with mitral valve regurgitation. Because of her eating disorder, she struggles to gain the necessary weight needed to survive a life-saving heart surgery. 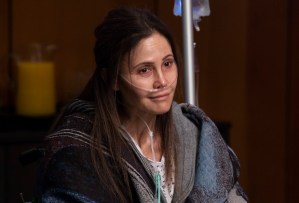 When nasogastric intubation fails, Claire recommends a neurosurgical procedure known as deep brain stimulation, or DBS, which would stimulate the part of Louisa’s brain that controls hunger. Melendez says it’s too risky, but Claire oversteps her bounds as a resident and informs Louisa that DBS is an option. And so, Claire goes before Andrews, Allegra and Melendez and makes her case for DBS. After Louisa acknowledges the risks (among them, it could permanently alter her personality and depress her maternal attachment towards her child), the doctors vote in favor of the procedure, 2-1.

When Louisa wakes up in recovery, her appetite is restored, but she has lost her ability to feel love towards her son. Later that night, Melendez reprimands Claire for disregarding his initial decision regarding DBS, and says it was Andrews who voted “no” on the procedure. He then tells Claire that she won’t assist on any more cases for the foreseeable future. 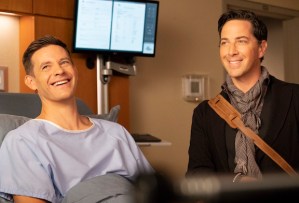 * Shaun, Lim and Park work on Wade (Pretty Little Liars’ Bryce Johnson), who is ultimately diagnosed with Crohn’s Disease. In order to avoid risking potentially fatal malnutrition as a result of the diagnosis, the doctors will have to reverse a gastric bypass he had more than a decade ago. Wade has never told his shallow husband Spence (played by Scandal’s Dan Bucatinsky) about the bypass, and asks that the doctors not disclose any information to his significant other. But after Wade suffers a bowel obstruction, Spence goes overboard on WebMD and approaches Park independently for answers. That’s when Park reveals that Wade is not being treated simply for Crohn’s-related lesions, and urges Spence to speak to his husband.

Lim and Park, both of whom are divorced, have differing opinions on Wade’s marriage. Park believes that harboring secrets is a detriment to any relationship, while Lim believes it’s quite the opposite. Spence eventually reveals to Park that he wishes he hadn’t been made aware of Wade’s bypass, admitting to himself that he is in fact superficial and concerned that his husband will get fat now that the procedure’s been reversed.

Later on, Park exits the hospital and makes a call to his ex. After confirming that an alimony payment was received, Park poses a hypothetical: “I have a question… about Phil,” he says. “I know he’s long gone, but I was actually wondering, what do you think would have happened if I hadn’t seen you two together?” And the scene ends there.

What did you think of The Good Doctor Season 2, Episode 5? Hit the comments with your reactions!