This week on The Good Doctor, Glassman continues to see visions of his dead daughter Maddie (The Americans‘ Holly Taylor), while Shaun tries to salvage his relationship with Lea.

Let us begin with Glassman, who first started hallucinating at the end of Episode 3. A nurse enters and offers Glassman the Ambien he previously requested to help him sleep, but Maddie warns Dad that the sleep aid will  cause her to disappear. She explains to Dad why she’s really here — or rather, why his subconscious has brought her to him. She reminds him of all the birthdays, holidays and weekends he missed while putting his career, as well as Shaun, before his family. Shaun walks in on Glassman as he raises his voice to Maddie, and promises not to tell his mentor’s doctor about the hallucination — a promise he manages to keep for all of 30 minutes. An MD walks in to give Glassman a sleeping pill, but he spits it out as soon as she leaves the room.

Maddie eventually taunts Glassman, telling her dad that she died hating him. It’s revealed that she struggled with drugs, and Glassman didn’t know how to handle it. One night, he came home to find that she was high again. He locked her out and never came to find her, thinking she would’ve gone over to Jessica’s. Instead, it’s implied that she suffered a fatal overdose.

At this point, Maddie takes Glassman’s hand and says she knows he loved her. She loved him, too. And upon hearing this, Glassman is finally at peace. He lets go and drifts off to sleep. He wakes up, 13 hours later, to find Shaun sitting at his bedside. Shaun asks if seeing Maddie was therapeutic. Glassman questions whether it was just his subconscious telling him what he wanted to hear, but Shaun, not knowing Glassman to be a liar, assures him that his subconscious was being honest with him. In other words, Maddie loved her father until the day she died. 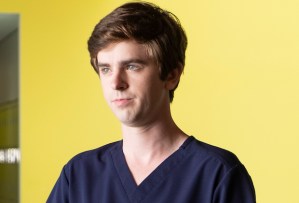 Shaun spent much of his downtime this week dealing with the fallout from his ongoing fight with Lea. At the beginning of the episode, he walks into his kitchen and offers Lea an apology donut. Lea then explains to Shaun that their issues remain unresolved, and a donut isn’t going to fix things. She promises to be out of his hair within 48 hours, then spends the day apartment hunting. Shaun mentions that her old apartment is available again (Kenny the Garbage Person was arrested, because of course he was), but Lea thinks it’d be best to put some distance between them.

At work, Shaun fills Melendez and Park in on his current troubles at home. Park explains to Shaun that sometimes an apology isn’t enough, while Melendez advises Shaun to move on. The anesthesiologist in the OR scoffs at Melendez’s advice, and tells Shaun to just be nice to Lea. He ultimately takes the advice given to him by both Park and the anesthesiologist and tries to be a supportive friend. He barges in on Lea while she’s looking at a two-bedroom apartment she can’t possibly afford to give her a listing for a nearby flat within her price range, but she doesn’t want his help.

Later, back at home, Shaun tries to make up for getting too involved. He rents a karaoke machine to recreate the night he and Lea shared their first kiss, but she isn’t in the mood. She explains to Shaun that Hershey meant everything to her; she took the biggest chance of her life going back there, and it didn’t work out. She returned to California because she knew she had a good friend who’d be there to support her, yet he hasn’t even asked what happened in Hershey.

At episode’s end, Shaun returns from work to find Lea all packed up and ready to go. She has yet to find an apartment, but plans to stay at an AirBnB until she finds something. In response, Shaun apologizes to the best of his ability. He says he tried to be nice, tried to go big, but it didn’t work. He struggles with relationships, but knows he doesn’t want to walk away from his friendship with Lea. He admits he doesn’t care what happened in Hershey, but cares that Lea cares. She takes his apology for what it’s worth, then asks if he wants to try karaoke again. As they’re singing “Islands in the Stream,” Shaun lets it slip that he rented that two-bedroom apartment for the two of them to share.

* Shaun, Melendez and Park treat Mac, a young, intellectually disabled patient who gets injured trying to hop a fence. He has a piece of splintered fence lodged in his shoulder, which is removed surgically. When the doctors come to tell his overwhelmed single mother Nicole that he’ll be able to return home that night, she seems disappointed. She was hoping for one night to herself. Park suggests that Nicole seek help with Mac, such as a home aid or even a group home. Melendez, whose sister Gabby is intellectually disabled, does not agree with Park, and makes that known to Nicole without revealing his bias. Shaun suggests it would be devastating for Mac if his mother decided to give him up, but says he’d get used to it. 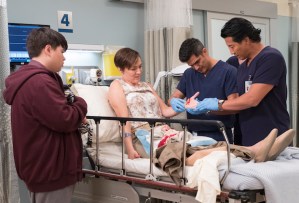 Mac reminds Shaun of himself, as well as his time in foster care after Steve’s death. We see young Shaun being placed in his third foster home with Sybil, a woman who introduces herself to him by saying — and I can’t believe I’m not making this up — “I don’t go to church, I swear, and I have sex with strange men. Your room’s on the left.” Sybil eventually gets diagnosed with an undisclosed, terminal illness, and tells Shaun he needs to move out. When he eventually leaves, we see her well up, proving she wasn’t all bad despite her hardened, “tough titmouse” exterior.

Nicole eventually returns to the ER, having sustained an injury to her hand. It’ll require surgery and an overnight stay, temporarily separating Nicole from Mac. It’s implied that the injury may have been the result of one of Mac’s violent outbursts. Park eventually confronts Melendez, telling his boss that Nicole trusts him, and he needs to be the one to give her permission to let go. And so, Melendez has a heart-to-heart with Nicole. He tells her there will be people who question her decision to send Mac to a group home, but she has to do what’s right for both herself and her son’s wellbeing. “Giving him up will be the hardest thing you ever have to do, but maybe you need to do it because of your love for him,” Melendez says. He then watches from a distance, along with Park and Shaun, as Nicole tells Mac what must happen. Melendez later goes to visit Gabby at her group home. 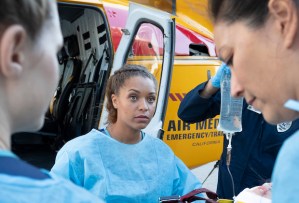 * Claire, meanwhile, treats Katherine, an 18-year-old rock climber who takes a bad fall. Claire and Morgan present Katherine and her parents with two potential surgeries, including Claire’s suggested spinal fusion procedure, which has a higher success rate, but could limit Katherine’s range of motion. The procedure suggested by Morgan comes with more risks, but would allow Katherine to maintain her quality of life. In other words, the adventure seeker would be able to continue risking her life to do what she loves. Katherine’s parents want her to choose spinal fusion, but Katherine’s got her heart set on Morgan’s surgery. And so, Katherine’s parents, who point out that their daughter nearly OD’ed on sleeping pills when she was 16, decide the only way forward is to have her declared mentally unstable. Once the hospital psychologist rules in their favor, they have the Lim and the residents move forward with spinal fusion. Katherine is initially upset and asks that her parents not be there when she wakes up from surgery, but Claire, who still has regrets about not controlling her own unstable mother, explains to her patient that her parents were only trying to do what was best for her. By episode’s end, Katherine seems to accept their decision.

What did you think of The Good Doctor Season 2, Episode 4? Hit the comments with your reactions!