This week on The Good Doctor, Shaun and Morgan get stuck with a 36-hour ER shift, while Claire, Park and Melendez treat a young woman whose husband is faced with an impossible choice.

Before we get to any of that, though, let us first check in with Dr. Glassman, who we last saw being administered anesthesia at the end of Episode 2. He wakes up in recovery and is immediately greeted by Shaun, who tells him that his brain surgery was a success. The only thing he needs now is plenty of rest, followed by chemo and radiation. Unable to sleep, Glassman grows hypersensitive to the sights and sounds around him. At one point, he hears a voice in the distance, which we later realize belongs to Maddie. Later, a vision of his dead daughter (played by The Americans‘ Holly Taylor) appears before him, and he’s brought to tears. Is it a dream? An hallucination? We’ll have to wait until next week to find out.

Shaun and Morgan, meanwhile, are sent down to the ER to cover a shift. Among the patients they deal with is a drugged-up teen with a long-lasting erection. He returns 12 hours later, and the priapism has yet to alleviate itself, despite an earlier draining procedure to prevent necrosis. Shaun eventually has a breakthrough (because of course he does), recognizing that the patient doesn’t have priapism, but an epidural abscess with pelvic extension. The solution? A surgery to prevent irreversible paralysis.

Lim, who’s on-call for the duration of Shaun and Morgan’s ER shift, spends much of it held in contempt of traffic court. She eventually gets called in to oversee the surgery, interrupting her late-night hookup with the prosecutor. (I gotta say, I’m really enjoying Lim’s increased presence this fall. Upping Christina Chang to series regular is one of the many changes that’s led to an improved Season 2.)

Throughout the day, Shaun continues to avoid Lea. Claire explains to Shaun that it can’t just be one person who does the talking in a relationship, and he has to listen to what Lea has to say. Morgan, meanwhile, proves she’ll forever be the worst when she tells Shaun that neither Lea nor Claire are really his friends. “They take you seriously as a doctor,” she says, “but not as a man.” She also tells Shaun that the kiss he shared with Lea after their drunken karaoke session last season was merely a “pity kiss.” 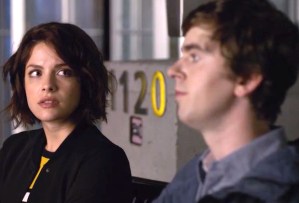 At the end of his shift, Shaun exits St. Bonaventure to find Lea waiting for him outside. He sits down next to her and apologizes for telling her to go back to Hershey; she’s been a good friend, and if she wants to talk, he’s ready to listen. Lea, who’s still upset, insists she’s been a great friend, and Shaun’s been a jackass ever since she got back to California. She gets up and leaves without him, then an eavesdropping Morgan walks by and gives her two cents. “Guess I was wrong,” she says. “She does think of you like a real man.”

The other, non-penile Case of the Week finds Melendez, Claire and Park treating a recently married woman named Gina. She needs a surgery to excise endometrial lesions, which are making it difficult to get pregnant. During the procedure, the surgeons find multiple lesions on Gina’s ovary, uterus, bladder — you name it, and later find a mass extending from the uterine to ovarian artery. There’s an alternative procedure that would prove a bigger risk to Gina’s life, but give her a greater chance of getting pregnant. Gina’s husband refuses to make the decision for her while she’s still under anesthesia, and tells Claire to do what she thinks is best. Claire ultimately chooses to proceed with a hysterectomy, deciding that Gina’s life is more important than becoming a mother.

Prior to Gina’s procedure, Claire takes issue with the new flex-time scheduling policy that gets Shaun and Morgan stuck with a 36-hour shift. Melendez tells Claire that she’s free to take it up with Andrews anytime, and so she does, presenting the hospital president with research that shows the negative effects that sleep deprivation have on critical thinking, and the benefit of reducing shifts to a maximum of 24 hours. Andrews, who was part of a nationwide study before implementing the new flex-time policy, disputes her findings. He then goes on to imply that asserting herself to him was a case of bad judgment. 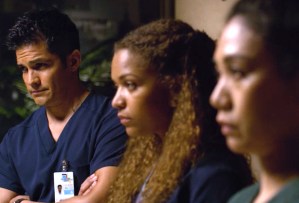 Later in surgery, Melendez tells Claire not to worry about Andrews’ reaction. When Park asks Claire why she’s upset, she explains to him that men tell women to be assertive, then criticize them when they finally assert themselves. (As you’ll recall, Andrews told Claire to assert herself more in the Season 2 premiere.) After an initial complication in Gina’s surgery, Melendez asks Claire to scrub out and brief the husband. When Claire asks, “Why me? Why not Park?,” Melendez seems perturbed and asks if there’s a problem. After Claire leaves the operating room, Melendez insinuates that she’s just having “one of those days.” He says he only meant that Claire got up on the wrong side of the bed, but Nurse Flores (9JKL survivor Liza Lapira) perceives his comment as sexist. This results in a hostile work environment witnessed by Andrews, who calls Melendez, Claire and Flores into his office as soon as Gina’s procedure is complete. Melendez and Claire let bygones be bygones, and Melendez commends both Claire and Flores for a job well done. Flores, meanwhile, compliments Melendez for valuing the input of his entire surgical team, though the look on her face suggests she’s not at all pleased with the result of the meeting.

What did you think of The Good Doctor Season 2, Episode 3? Hit the comments with your reactions!