When we last left The Good Doctor, Shaun had packed up his belongings and left without notifying Dr. Glassman. So where did he go? Keep reading to find out…

At the start of “Islands (Part One)” (that’s right, folks, we’ve got ourselves a two-parter!), Shaun was revealed to be hiding out at Lea’s apartment. Glassman came barging in to look for the surgical resident, and came thisclose to finding him beneath Lea’s captain’s bed before she threatened to call the cops. Glassman returned to the hospital the following day, covering for Shaun when Melendez and Andrews started asking questions. 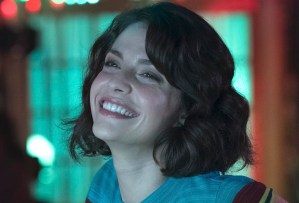 Back at the apartment, Lea persuaded Shaun to play hooky, and the two embarked on a trip in her late grandfather’s Gran Torino. Once they were out on the open road, she convinced him to step even further outside of his comfort zone: She taught him how to drive (and later how to burn rubber, resulting in a minor accident), ordered him his first-ever tequila shot (or two… or three), and convinced him to get up on stage and sing karaoke (after the aforementioned consumption of tequila). But the highlight of Shaun’s day was their end-of-night kiss, which doubled as his very first. The kiss went so well, in fact, that there probably would have been a second had he not gotten the sudden urge to vomit. (Give him a break! He’d never had a drink before!)

The next morning, a hungover Shaun worried that his puking sesh had destroyed any chance of Lea wanting to kiss him again, an idea she quickly shot down. The two then headed out for a bite, where she proceeded to ruin his pancake breakfast by telling him that she was quitting her job and moving back to Hershey, Pa., to work in her family’s auto body shop. Shaun, unable to bear the thought of Lea no longer being in his life, ran out of the diner without saying a word. As the episode drew to a close, the heartbroken medical marvel sat down at a bus stop, put in his headphones, and cued up a song that Lea played for him in the car.

* Kalu went to Coyle to apologize, in hopes that the attending would talk to Andrews about getting him reinstated. When that didn’t work, Claire told Coyle that he had one of two options: He could either help Kalu get his job back, or she’d ruin his career by making it her mission to find every female hospital employee he’d ever tried to pressure into having sex. Later, Andrews called Kalu to tell him that Coyle had come forward, but his firing would not be reversed.

* Melendez, who spent much of the hour conflicted about fiancée Jessica never wanting to have kids, ultimately decided that he was willing to sacrifice becoming a parent if it meant getting to be with her. (Yeah, we’ll see about that…)

* This week’s patient(s): 18-year-old conjoined twins, with one in need of a kidney transplant. After unexpected complications, the doctors were forced to perform their separation surgery six months ahead of schedule. The procedure seemed to go well, until Melendez later revealed that the twins were having trouble waking up.

What did you think of The Good Doctor‘s winter premiere? Drop a comment below.