One thing you have to give The Voice’s Battles this season: They’ve been full of surprises. Sometimes they were good. (For instance, I did not see Reagan Strange coming and hadn’t guessed that Tyshawn Colquitt’s bag of tricks was that overstuffed.) Sometimes they were mystifying. (Jennifer Hudson wasting a Steal on Anthony Arya and Kelly Clarkson letting go of showstopper SandyRedd?!?) And sometimes they were downright upsetting. (Even worse than no one stealing Natalie Brady after Adam Levine cut her was Kelly’s elimination of Mikele Buck, who’d given one of my favorite Blind Auditions — and in a montage, no less!) What variety of shocks did the last of the Battles deliver Tuesday? Read on and find out. 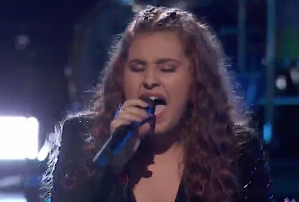 Team Kelly: Sarah Grace (Grade: B) defeated Erika Zade (Grade: B) on “No Roots” | Hard to believe, but rehearsal marked Sarah’s first-ever vocal lesson. (She gave that Blind Audition totally unschooled? Damn!) Kelly hoped Alice Merton’s hit would be bluesy enough for Sarah and still pop enough for Erika. Sounded good to me as they practiced. Since Kelly wanted to see “the vibe” from the teammates, Sarah wondered if she’d be able to move on stage as well as Erika. In turn, Erika feared the notes were just out of her reach. In the moment of truth, Sarah came off so polished out of the gate that I couldn’t fathom that she had no training. A little too much stank face, perhaps, but solid. Meanwhile, Erika… there was something cool about her vocal, a smoky quality that made you lean in and listen closer. In the end, I had to call it a draw. Neither of them were “OMG” amazing, but they were both pretty good. 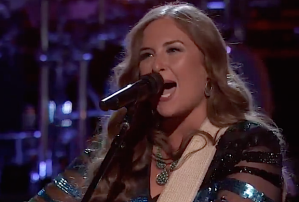 Team Blake: Kameron Marlowe (Grade: B+) defeated Kayley Hill (Grade: B+) on “Only Wanna Be With You” | In rehearsal, Kameron and Kayley’s vocals sounded as distinct as a dirt road and a marble floor. Kayley sings beautifully but kinda struggled here. Kameron, on the other hand, came off like he was born to reinterpret Hootie. His gritty voice seemed to give him a natural advantage. When the competitors stepped into the spotlight, well, OK! They both sounded like they’d just been downloaded off iTunes. Kayley had the prettier voice — I mean, she sings like the proverbial bird — but there was a genuineness that radiated off of Kameron that I figured had to give him the edge. Who knew he’d get so much freer when he put down the guitar? Kinda surprised Kaley didn’t get stolen, though. It might not have been a shoe-throwing-exciting performance, but it was pitch perfect. 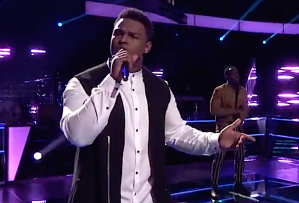 Team Adam: DeAndre Nico (Grade: C+) defeated Funsho (Grade: C-) on “Can You Stand the Rain” — Funsho stolen by Blake | When we first got to hear the guys side by side in rehearsal, Funsho immediately sounded like he had the more distinctive, recognizable voice — not a great omen for DeAndre. Interestingly, Adam didn’t want the guys to harmonize — that would be too cute, he thought. Instead, he wanted them to sound like a two-person New Edition. As Funsho strolled on stage, he even looked like he had the Battle in the bag. DeAndre acquitted himself nicely, serving a reminder of how rich a voice he has. By contrast, Funsho’s vocal kinda shrank — he sounded tinny and weak. (And throwing his arm over DeAndre during the number just made for some supremely awkward “choreography.”) This was DeAndre’s to lose.

In a montage we learned that Claire DeJean had defeated Josh Davis to remain on Team Kelly, Kirk Jay defeated Caeland Garner to stay on Team Blake, and Kennedy Holmes trounced Lela to continue on with Team JHud. (Kennedy Holmes — my favorite from the Blinds! — montaged?!? That is so not right!)

So, what was the biggest shock for you during Season 15’s Blinds? Vote for your favorite Night 4 singer below, then hit the comments with your answer.