After one last hour of Blind Auditions Monday, The Voice kicked off its Battle Rounds, and frankly, they couldn’t start soon enough. Although there have been some memorable contestants singing their way onto Blake Shelton, Adam Levine, Jennifer Hudson and Kelly Clarkson’s teams, Season 15 has thus far felt a little… underwhelming, like a period instead of an exclamation point. You guys haven’t even been inspired to argue in the comments about which vocalists were/weren’t amazing or tell me how tone-deaf I must be to assign the grades that I do. So did the kickoff of the Battles at last give the goings-on the shot of adrenaline they needed to really get going? Read on, then sound off.

The Last of the Blinds 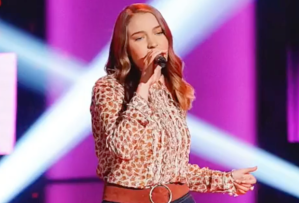 Emily Hough, “Big Yellow Taxi” (Team Adam) — Grade: C+ | A farmgirl with a cute sense of humor and an adorkable knack for doing accents, Emily got a chair turn from Adam almost immediately with her Joni Mitchell cover (then reeled in Blake and Jennifer, too). Maybe Adam was having Addison Agen flashbacks. I wouldn’t put this 16-year-old in that league — she lacks Addison’s polish and pitch-perfectness — but there was enough sunshine in her voice that she almost didn’t need a spotlight on her. I just wish that voice had been a little bit stronger and more consistent. 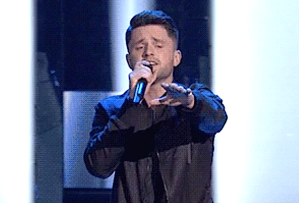 Josh Davis, “Too Good at Goodbyes” (Team Kelly) — Grade: D | This personal trainer from Cleveland, Tenn., was once signed to a record deal as part of a Christian boy band. But he’d moved on to secular music well before arriving on the Voice stage… which seemed about right, as I didn’t think he had a prayer of being chosen for a team (till Kelly first turned her chair and proved me wrong). Josh pulled off a few big notes and demonstrated that he could have a nice tone but, as often as not, just sounded unsure and pitchy. Not wowed. 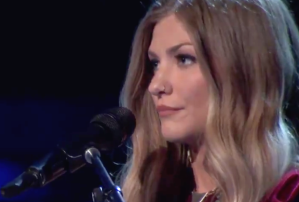 Katrina Cain, “Rhiannon” (Team Blake) — Grade: A | This newlywed cancelled her honeymoon so that she could audition for The Voice. At least her groom had to understand — he’s in music, too, and, in fact, in an electropop act with her. And holy crap, could she sing! Her voice was like sweet, sweet honey being poured over the mic. And her cool, rhythmic rearrangement of the Fleetwood Mac classic suggests that her future performances won’t just be lovely to hear but really interesting, too. Inventive and talented? Oh yeah, I’m sold. 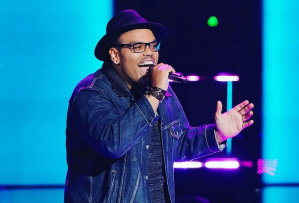 Matt Johnson, “Never Too Much” (Team Jennifer) — Grade: C | This winery employee, devoted to his mom who’s battling cancer, radiated genuineness in his pre-performance interview. Determination, too — apparently, he’d tried out for The Voice every season since the first! On stage, he kinda demonstrated for us why he’d had trouble making it onto the show. One minute, he was delivering ’80s soul-pop star power, and the next, he was so hit-and-miss that I was like, “Hmm… not so sure about this.”

The First of the Battles 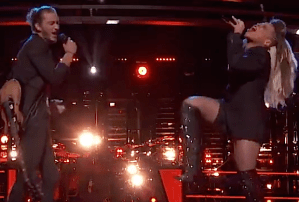 Team Kelly: Cody Ray Raymond (Grade: B) defeated SandyRedd (Grade: A-) on “Cry to Me” — SandyRedd stolen by Jennifer | In rehearsal, SandyRedd sounded like she was gonna just wipe the floor with Cody Ray. Kelly could ask him all she wanted to give her something bigger, but it didn’t seem to me like there was a snowball’s chance in hell he could sing bigger than his teammate. He’s a solid singer; she’s just a beast (in the best possible way). On stage, Cody Ray started off singing with a disarming tenderness, but he and SandyRedd hadn’t even made it through the first verse before she was out-singing him. Eventually, I just started to think of him as her pretty-good backup singer. Kelly’s decision to go with him instead of SandyRedd literally made me gasp in shock. 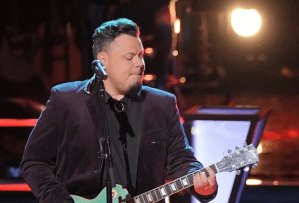 Team Blake: Michael Lee (Grade: B+) defeated Joey Green (Grade: B-) on “A Thing Called Love” | Blake encouraged his team members in rehearsal to think of their Battle as less of a battle and more of a duet. But let’s be real — the pals’ Bonnie Raitt cover was always gonna be a raspy-ass fight to the finish. (And the edge was always going to be Michael’s; he sings like a more nuanced Pryor “I Swallowed a Chainsaw” Baird.) In the moment of truth, Joey delivered an enjoyably tangy vocal; Michael, a swaggering, full-on performance that highlighted the contrast between his baby face and a voice as hard and gritty as cement. 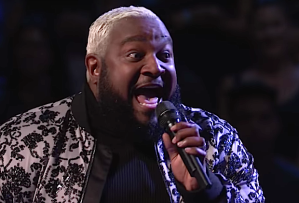 Team Jennifer: Patrique Fortson (Grade: A-) defeated Colton Smith (Grade: B) on “God Gave Me You” — Colton stolen by Blake | In rehearsal, both Patrique and Colton were a little “WTF?” over their coach assigning them a Blake number. But they didn’t seem to have much trouble turning it into a song that was more soulful than countrified. When they took to the stage and Patrique started the first verse singing as softly and sweetly as an angel whispering, I thought the Battle might be over as quickly as it began. But Colton came out swinging, turning in a strong, rich vocal that made for a nice contrast in the duet. Still, it wasn’t enough (and wasn’t quite consistent enough, either). Patrique’s range and delivery were so impressive, they could have parted the clouds. One high note of his even knocked JHud back in her seat. (And yes, natch, a shoe flew!)

So, which of the last Blinds left you seeing a star? Which Battle performance did you think was the fiercest? Vote in the polls below, then hit the comments.