Before last week’s A Million Little Things, star David Giuntoli says, Eddie was too overwhelmed with grief to consider the possibility of everyone finding out about his affair with his dear — and also, dead — friend’s wife.

But life comes at you fast.

“In our show, we play the days as literal, chronological days. So Episode 3 might be four days after [Jon’s] funeral,” the actor tells TVLine. “So yeah, Eddie is not yet thinking about these other problems. He’s dealing with the trauma of Jon’s death and his guilt around that. The last thing on Eddie’s mind is this secondary thing that could possibly happen, which is that people are going to find out an affair that had already ended.”

As viewers of the ABC drama know, that’s exactly what happened, thanks to an ill-timed phone call intercepted by Eddie’s wife, Katherine. The fallout from the revelation continues in this week’s episode (Wednesday, 10/9c), in which the members of the tightly knit friend group struggle to make sense of everything that’s happened.

In advance of the hour (but before the Grimm spinoff news broke), we got Grimm alum Giuntoli on the phone to talk about all the Things, including Eddie’s (seemingly foolish) plan in Episode 5 and whether or not the character’s sobriety can stand all of the stresses placed upon him.

TVLINE | Do you think Eddie still loves Delilah?
Oh, yeah. No, Eddie’s in love with Delilah, that’s never going to change, but they have definitely ended the affair. Imagine keeping it going three days after the death of one of his best friends and spouse’s husband? [Laughs] At least, it’s on hold for a long time. 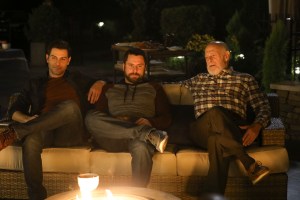 TVLINE | A big chunk of Episode 4 takes place at a dinner in the past. What can you tell me about that gathering?
We go back and do a brief flashback — brief enough for the audience to buy that we are in our early 30s. We explore some of our dynamics from the past. Katherine and Eddie, Jon and Delilah. Right now, Jon has been written a little bit as this golden boy, [but] there are some real issues in their marriage. We explore some of that. We see a couple more pearls in Gary’s string of women, and we meet Delilah’s father.

TVLINE | And then in Episode 5, Eddie’s trying to win Katherine back. At where we’re at not, that seems like a herculean task.
Oh yeah. Good luck, Eddie. Yeah, do something nice. Do something nice after an affair, that will win her over. [Laughs]

TVLINE | Is she receptive at all?
Here’s the thing. If Eddie and Katherine’s relationship did not have a child involved and a life kind of built around them, I would imagine they would’ve been divorced years ago.

TVLINE | Interesting.
But because we have Theo, because I am the primary caregiving parent, and she’s the primary breadwinner, it’s an organization. We’re a team. It works as a team, but it’s not working as partners emotionally in any way — or probably sexually in any way. Do for Katherine to leave Eddie is about as obvious and as easy a choice as it would be, if we didn’t have a child.

TVLINE | Eddie’s had some huge blows lately. How does his sobriety fare as the season progresses?
Not good. I think Eddie is getting pushed closer and closer to his safe place, which is the bottle… We’re going to explore things like his [Alcoholics Anonymous] life, his sponsor… I think if he drinks again, it’s not like he can just have a light buzz and tell a few jokes and go home. He turns into an ugly guy, and he is self-destructive. He will lose Theo forever. The stakes are really, really high.