Safe to say, A Million Little Things‘ Delilah Dixon has had better weeks.

Remember (as if the show would let you forget!), we’re not that far out from her husband’s suicide. As a result of that terrible event, she ended an affair with the man she loves. And the petals have barely fallen off Jon’s funeral flowers when the secret of her tryst with Eddie becomes public knowledge in this Wednesday’s episode.

The fallout is as painful to watch as you might’ve guessed. But hey, much of it takes place at a hockey fantasy camp, so there’s that?

Read on for the highlights of “Save the Date.” 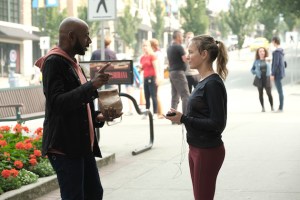 EVITE FROM THE GREAT BEYOND | Even though Jon is no longer with us, he still manages to slide into everyone’s alerts via a pre-set reminder that Gary’s birthday is upon them. Apparently, Jon set up a big surprise for his friend’s big day. And even though Gary hates celebrating his birthday and absolutely no one is in the mood to party, the guys decide to carry through with Jon’s plan because it’s what he would’ve wanted.

Before we get into the details of that, you should know that a) Maggie gets real snappy with Gary when he starts poking around in a box of her things one morning after sex, and b) Rome hasn’t given up on the (very bad) idea that Maggie should be his therapist. She holds firm on her recommendation that he call Dr. Heller… until he says that it took him a lot to work up the courage to come to her, and he’s not in a place where he feels OK going to a stranger with his issues. So she relents and says she’ll have lunch with him on Friday “as a friend” — but he has to promise to call Heller.

LET THE FESTIVITIES BEGIN! | Eddie decorates the outside of Gary’s apartment with streamers etc., and he’s waiting there when his pal comes home from Maggie’s. “Look at you, doing the walk of shame!” Eddie calls. “Walk of shame? No. I just had morning sex. This is a victory lap,” Gary replies. (Heh.) As they discuss their love lives, Eddie says that the affair with the love of his life is done: “It just wasn’t meant to be.” Then Rome arrives, and then a chauffered SUV pulls up. “Which one of you is the birthday boy?” the driver calls out. “Damnit, Jon,” Gary mutters. 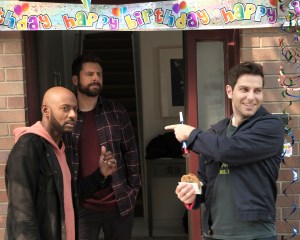 The surprise: They’re all headed to Bruins Fantasy Camp, where they’ll suit up like members of the team and play hockey on the rink at the Garden. But before they can get there, Eddie insist on swinging by his place to pick up his lucky skates and to ask Katherine if she can pick up Theo that afternoon. She’s fine with it, and in his elation, Eddie accidentally leaves his phone on the table next to where she’s working. She answers it when it rings — I get the sense she thought she was picking up her phone or wasn’t thinking much about it in general, not that she’s being sneaky and/or malicious — and that’s when everything gets bad.

Outside, Eddie realizes he left his cell inside. And when he goes back to retrieve it, Grace coldly wonders why a hotel manager was calling him to tell him they couldn’t find his necklace. He lies, and she catches him in it, and pretty soon, she’s flat-out asking him, “Were you having an affair?” He won’t deny it but also won’t say who the woman is. “Oh my god, is it someone I know?” she demands. Eddie confesses that it was Delilah… unaware that Gary has come inside and has overheard everything.

ICE COLD | A furious Gary immediately tells Rome, and Eddie falls all over himself trying to explain. But the guys don’t want to hear it, and they tell the driver to leave Eddie behind. In the car, Rome wonders why Gary’s not mad at Delilah. “Because she’s not here,” he says simply. Gary balks at Rome’s desire to move forward with their day, but Rome makes a point of saying that he pretends nothing bad is happening literally every day — “That’s how I get through” — and so they stick to Jon’s schedule.

So they don personalized jerseys and put on their game faces, but all pretense is off when Eddie arrives and tells them he’s not leaving. The whole thing explodes in a brawl that ends with Gary pinning Eddie (I’ve gotta give it to James Roday — he commits to the anger, and a slightly outta control Gary drools on Eddie as a result); the outburst gets all three of them thrown in the penalty box.

Eddie apologizes to his friends, vowing that he and Delilah fought their attraction “every single day, until we fell in love.” He’s very worried that Jon knew about the relationship and killed himself because of it. “I hope that’s why,” Gary said. Ouch. “At least then, I’d know why.”

THE LADIES FIND OUT | Meanwhile, Regina arranges for Maggie to meet her and Delilah for manis/pedis and lunch, but all the widow wants to do is to get Jon’s personal effects from his office. So the other two women accompany her. Eddie calls, but she sends him to voicemail, only learning later that their secret is out. Oh, and Rome has let Regina know, too. “How could you?” the chef says, disgusted.

The shame train keeps chugging on, especially when Delilah returns home to find Katherine waiting in her driveway. Jon’s wife immediately apologizes, saying that she was in a bad place in her life and her marriage, and she shouldn’t have complicated it by messing around with Eddie. Katherine laments that she can’t confide in the one person who understood her professional drive — Jon — and then says she won’t yell at Delilah, because “I think you’ve already paid the ultimate price.”

A WIN AND A LOSS | Once they’re out of the penalty box, the guys engage in just enough teamwork to win their scrimmage. But Gary makes it clear that things are NOT OK among them, because Eddie’s actions are “unforgiveable.” In the car home, Rome — who is also very angry still — throw his friend a small bone as he points out that people find out about affairs all the time but don’t kill themselves over it.

At home, Eddie tells Katherine he’ll do whatever she wants regarding their marriage. “Do you love her?” she asks. And when he takes too long to answer, she slaps him. 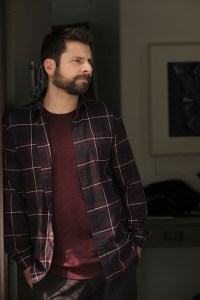 THIS TAKES THE CAKE | Meanwhile, Gary is shirty with Maggie — he very snippily tells her to leave him alone — and then winds up at Delilah’s door. “Why wasn’t he enough? He was enough for me,” Gary says. Delilah says that’s just it: Jon was everything to everyone, “which was great, except that I just got forgotten.

Gary then launches into a monologue about why he hates his birthday (he remembers realizing his parents were going to get a divorce after hearing them argue on his birthday) and why he decided never to get married but Jon and Delilah had changed his mind about that. She invites him in; there’s a birthday cake there for him, because (say it with me!) Jon thought of everything. “Not for nothing, how upset should I be that you picked Eddie and not me?” he asks her, and I think it’s mostly a joke, but TOO SOON, GARY. He wishes for them all to be happy, but one of his candles stays lit after he blows them out. “Damnit, Jon,” Gary says quietly, finishing the last one off.