Eddie’s ability to convince himself that he wasn’t the worst friend in the world to Jon continues to crumble in this week’s A Million Little Things… but at least his crushing guilt is accompanied by some delightful choreography.

Allow me to explain: When Jon and Delilah’s daughter, Sophie, needs someone to step up and step in to take her dead dad’s place in her school’s father-daughter dance night, she decides that Eddie is her best option. But she doesn’t know that a) her guitar teacher has been plucking her mom’s D-string on the regular and b) her mom has just realized that Jon probably knew about her infidelity with his best friend. Five, six, seven, eight, shuffle-ball-change!

Read on for the highlights of “Band of Dads.” 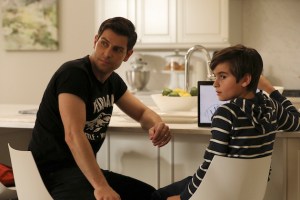 YOU YIN SOME, YOU YANG SOME | The yin-yang necklace Eddie wears all the time is missing. The good news? Delilah finds it. The bad news? She finds it in Jon’s bedside table, which she reads as a clear indication that he knew she and Eddie were sleeping together.

She relays all of this to Eddie on the day after the funeral, when the entire gang turns up at the house for an impromptu breakfast hangout. Rome and Regina bring the bagels, and let’s hope they made the trek to Kupel’s in Brookline, because Boston is a legit bagel wasteland. (Don’t @ me, Bruegger’s!) Maggie is already there when everyone arrives — Gary is especially surprised to see her, given that they hooked up again just hours before — and… I’m going to have to just go with the idea that this tight-knit group of friends is so instantly accepting of a virtual stranger who’s come into their lives at the absolute worst time, aren’t I?

While everyone teases Gary about how little he knows about his new lady, Gary’s got something else on his mind: whether or not Rome has told Regina what he shared with the guys at the hockey game. The answer to that is no, which leads Gary to threaten his friend, “If you don’t find someone to talk to about this by the end of the day, I will tell Gina myself.”

Then Jon’s assistant, Ashley, shows up with coffee, and Delilah invites her to stay for a while. Sure, why not? The more the mournier!

When the issue of Sophie’s school event comes up, Delilah assures her daughter that she can skip it. But Soph quotes Jon in saying “Dixons never quit,” and her strength inspires Rome, Gary and Eddie to form a “band of dads” to fill in for their late friend. And when Sophie chooses Eddie, he looks like he’s going to vomit, but he agrees to learn the routine and be her partner that evening.

WHO’S THIS NOW? | Gary drives Maggie home from breakfast and is surprised to see a guy waiting outside her apartment. Gary is even more surprised by the complete lack of explanation or introduction she gives before bidding him goodbye. After Gary takes off, we learn that the dude is her ex-boyfriend, Tom, who is extremely worried about her. (In an extreme HIPAA violation, her doctor told him that she skipped her chemo appointment.) “I know this sounds crazy, but cancer is not the worst thing that ever happened to me,” she tells him, adding that she’s happier than she’s ever been and that she didn’t leave him, “I left the old me.”

Back at Delilah’s, Ashley is printing out the contract for Regina’s restaurant in Jon’s home office. She flashes back to her boss’ death and the envelope she found marked for Delilah. In flashback, we watch her open it and get a quick glimpse of what the letter said. And because I am ridiculous, I froze the screen and transcribed what I could make out:

Provide you with… have done will surprise you. Please know that… stop this. I tried everything… There’s an envelope behind the painting from… Ashley had no idea I was going to do this, she wa… ask her what she’s doing, as I don’t want you imp… doesn’t know what you know, she.. protect… Don’t feel like today was…

Ashley, of course, retrieves that envelope — it’s marked “Rutledge” — from behind the painting in the home office. Inside is a packet for a life insurance policy; Jon’s beneficiaries are Eddie, Rome, Gary and Barbara Morgan… whoever the heck she is. (Who else wants to bet that she’s the unnamed funeral goer Constance Zimmer played in the premiere?) 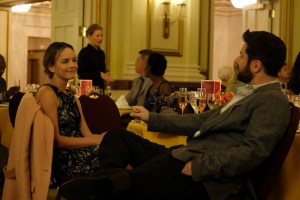 BABY STEPS | Rome waits outside Maggie’s place of work until she shows up, then he hands her a smoothie and asks her to be his therapist. She (correctly) points out how that’s an ethical no-go, but it doesn’t stop him from flopping down in her office and telling her everything about his aborted suicide attempt. He finishes by saying he can’t find any difference between himself and Jon, but as she even more strenuously now refers him to one of her colleagues, she points out something he’s missed: “You made the decision to live.”

Then Rome offers to drive her to Sophie’s recital, and while I can’t think of one single reason on Earth that Maggie would a) be invited or b) even want to go, she accepts.

At the event, Maggie tells Gary that Tom is “just someone from my past,” and they’re back to their usual flirty banter. Things are decidedly less light backstage, where Eddie is about to have a panic attack because “It doesn’t feel right. I’m not her father,” he tells the guys. So Rome, who apparently had secretly coached Jon on his moves and therefore knows the choreography, tells Sophie that he’ll be her partner. Y’know, because what this poor girl needs is even more upheaval in her life.

Sophie is touched to realize that Jon had been putting in extra work to nail the routine — “He didn’t forget about me. Dad did have a plan!” — and she and Rome are a hit. Meanwhile, Delilah gives Eddie back his necklace, and he finally listens to the voicemail Jon left right before he committed suicide.

In the message, Jon asks Eddie to do him a favor: “Love each other.”