Four guys, stuck in a broken elevator, bond over their love of the Boston Bruins. They become fast pals, and their friendship flourishes over the years, through relationships, weddings, the birth of children, professional advancements and, in one case, hard-won sobriety.

Then one member of the group commits suicide, and the remaining three wonder how well they really know each other, after all.

That’s the premise of A Million Little Things, the ensemble drama which premiered Wednesday on ABC. In a moment, we’ll want to know what you thought of the episode. But first, a quick recap:

The hour picks up with the death of Jon (Search Party‘s Ron Livingston). As his fellow Bruins bros and their families mourn, we get to know them. There’s Rome (Weeds‘ Romany Malco), whose own suicide attempt was thwarted by the call announcing Jon’s death; Eddie (Grimm‘s David Giuntoli), a musician and recovering alcoholic who’s cheating on his wife, Katherine (Hawaii Five-0‘s Grace Park); and Gary, (Psych‘s James Roday), a breast-cancer survivor who hooks up with Maggie (13 Reasons Why‘s Allison Miller), a woman he meets at a support group. 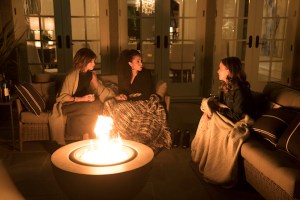 Thanks to Rome, an advertising executive/aspiring filmmaker who’s married to a chef named Regina (The Originals‘ Christina Moses) and who likes to capture his friends via iPhone, we get a lot of flashback footage of Jon over the years. He seems like he’s got an ideal life — great wife, kids, high paying real-estate job — which makes his death all the more confusing. (Some secret files and the squirrelly behavior of his pretty assistant Ashley add to the mystery surrounding Jon’s jump off his office balcony, which is likely to unfold all season.)

In the aftermath of Jon’s suicide, Gary, in particular, is feeling rather despondent. “We don’t talk,” he says to Rome and Eddie, at least not about anything important. And therefore, “We don’t really know each other.” He continues this argument as the guys attend a Bruins game the night of Jon’s funeral… and that’s when Eddie confesses that he’s in love with the mother of one of his guitar students, and Rome sobs as he admits that he’d be dead if he hadn’t gotten the call about Jon exactly when he did.

A Million Little Things saves its big twists for the end of the episode. Eddie’s lover is Jon’s widow, Delilah! Maggie’s cancer is not in remission! And Jon might have been keeping bigger secrets than any of his good pals realized! And though a guilt-wracked Eddie gets thisclose to having a drink, he chooses to play Joni Mitchell’s “Both Sides Now” with his young son instead.

Now it’s your turn. What did you think of the new series’ premiere? Log your choices in the polls below!