You sure you want a seat at the Resolute Desk, Elizabeth?

It would be natural for Madam Secretary‘s protagonist to think twice about her unannounced Oval Office dreams, given that that very room was the site of a lethal act of terrorism in the CBS series’ Season 5 premiere.

The episode opened with the attack, which took place as leaders from India and Pakistan gathered at the White House to sign a memorandum of understanding between the two countries. A giant explosion rocked President Dalton’s office, and it was unclear who — including Stevie, who’d been in attendance — had survived.

Then the action rewound to a week earlier. When India’s response to Hindu violence against Muslims was rather tepid, the president agreed with Elizabeth’s decision to issue a public rebuke against the Indian prime minister. But the secretary of state later softened that shaming in an attempt to make better progress on nuclear disarmament with India, which stymied both Henry and her staff. And when Henry voiced his thoughts on the matter during a panel discussion, his criticism of India led that country’s delegation to break off talks. 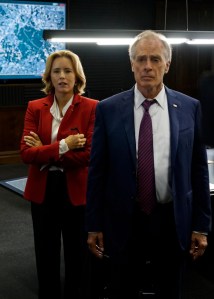 Through Elizabeth’s sheer force of will (and a cagey meet-up at her house), the talks resumed. But news of the renewed diplomacy led to protests. And just as Elizabeth pulled up to 1600 Pennsylvania Ave. for the memorandum signing, the bomb blast went off. Though Elizabeth tried to get inside, her guards spirited her away from the grounds and to safety. Meanwhile, inside, Russell’s longtime assistant June (played by Alice herself, Linda Lavin) wound up with a large piece of glass embedded in her chest, and Stevie passed out after a shard of glass came dangerously close to an artery.

At the hospital, as Elizabeth and Henry awaited word on Stevie, both wondered whether a presidential bid was the best idea. But before they came to any conclusion, the doctor announced that their oldest child had survived surgery and would be fine. June, however, died on the operating table; Russell made an uncharacteristically emotional call to June’s husband to deliver the news.

Though everyone suspected foreign terrorists were responsible for the attack, the culprits turned out to be American white nationalists who were upset about a possible trade deal with India. The memorandum signing was rescheduled, and a shaken Elizabeth summoned three former secretaries of state — Gen. Colin Powell, Madeline Albright and Hillary Clinton — to seek their counsel about how to handle messaging.

Elizabeth’s predecessors agreed that her remarks had to reassure the country and remind citizens that the United States’ strength lies in its core democratic values. The terrorists “attack what has made American great, and still does, and that is our diversity,” Clinton noted, in what may or may not be a sly dig on President Donald Trump’s favorite slogan. (For the record, here’s what executive producer Lori McCreary had to say about the line: “What it is is a statement about what’s happening in our show, because our White House has been attacked by nationalists that we think are home-grown nationalists. So it really is a statement about that fact and what happens when people start getting nervous about people that look ‘other’ being part of all of us.”) 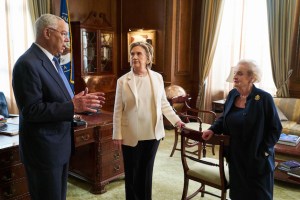 In general, Clinton, Albright and Powell suggested that Elizabeth talk about what unites Americans, and that’s exactly what she did. In a speech at the memorandum signing, Elizabeth called nationalism “the existential threat of our time” and made it clear that nationalism is not patriotism, “but a perversion of it.”

“These are three warriors, truly,” series star Téa Leoni told TVLine about the visiting dignitaries during a late September visit to the set. She added that she took “solace” in Albright, Clinton and Powell’s seemingly tireless commitment to one of America’s founding principles.

“They each have worked in service to this country tirelessly for decades,” Leoni said. “Where I took solace is that they haven’t given up, that they are as motivated to see this through, to show off how strong our democracy can be.”

Now it’s your turn. Grade the premiere via the poll below, then hit the comments to expand upon your thoughts.