We may never know where former Secretary of State Hillary Rodham Clinton stands on one of history’s most divisive issues: #TeamIvy or #TeamKaren? But we do know, thanks to the good people at Madam Secretary, that the onetime presidential hopeful has a soft spot for NBC’s cancelled Broadway drama. (More on that in a moment.)

Clinton filmed an appearance on the CBS political drama in July alongside former Secretaries of State Gen. Colin Powell and Madeleine Albright. The trio appears in Elizabeth’s office when she asks for advice about a delicate situation; their cameo is part of Sunday’s Season 5 premiere (10/9c).

Of the distinguished guests, only Albright had been on the show before. And while you’ll have to wait until Sunday to find out exactly what brings the diplomatic powerhouses back to the U.S. Department of State, allow us to share four HRC-related stories told by executive producer Lori McCreary and members of the cast during TVLine’s visit to the set in September. 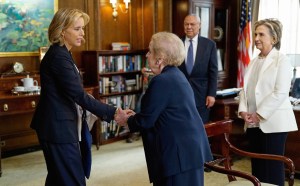 THE SECRETARIES MADE IT THEIR OWN | Clinton, Powell and Albright “had a couple of comments” about line changes, McCreary recalls. “They each just added little embellishments to the lines that were already there throughout the scenes.” She remembers Albright asking to add a line about thanking Elizabeth for seeking their counsel, “because they used to do it all the time when she was Secretary of State.” The day went very smoothly, McCreary says — both she and EP Barbara Hall were on set — and she marveled at how giving the diplomats were with their time and energy. “We make the fake State Department, and we solve fake crises,” she says. “They’ve actually done it in real life, so it was really an honor that they would spend their time with us.”

NOTHING BUT RESPECT FOR ELIZABETH’S PRESIDENT | Keith Carradine, who plays the drama’s fictional U.S. President Dalton, recalls putting on Conrad’s suit and American flag pin and going to the set. “I went over to Hillary first. She turned and looked at me and she said, ‘Oh, Mr. President!'” he says. laughing. “It was so great. All of them addressed me as ‘Mr. President.’ It was hilarious and wonderful, and they were there with such a spirit of play.”

LET ME BE YOUR STAR | Blake, Elizabeth’s assistant (portrayed by Broadway star Erich Bergen) who ushers Powell, Albright and Clinton into his boss’ office, wasn’t even in the episode at first. Then, Bergen says, he called series star/producer Téa Leoni. “You don’t think they need water? You don’t think the Secretaries of State will be parched at any point?” he remembers asking. “I said, ‘Please find a way.’… And the next draft of the script, Blake was bringing them water.”

And it’s a good thing, too, because if Bergen hadn’t been there during filming, we might never have known of Clinton’s affection for the men and women of Bombshell.

“Hillary, in particular, has a deep love of television and theater,” he tells TVLine. “We got to chat about that a lot, because I was doing Waitress on Broadway at the time.” He says he remembers that Clinton was aware of Bergen’s role in the musical, likely because of her friendship with Waitress composer/lyricist Sara Bareilles and sometime star Katharine McPhee.

“Hillary said at one point, ‘Oh, I was a big fan of Smash,'” Bergen recalls, looking completely taken aback. “I said, ‘Mrs. Hillary Clinton, this is not a conversation I ever planned on having with you, us talking your love of a cancelled TV show about musical theater.”