There’s no update on “her” and no info on 1970s Rebecca’s mystery man in this week’s This Is Us, but there is a huge reminder that Randall has spent his whole life trying to find his place.

And he’s still working on it. And his family remains kind of oblivious to his pain.

A casual remark dropped at the end of the episode puts a sour finish on an already tough hour that finds Randall struggling for acceptance both in his biological father’s old community and among his own siblings.

Meanwhile, Toby’s already showing the effects of having dumped his anti-depressants down the toilet. These include: nervous knee-jostling, increased randiness and a tendency to lash out at his mother-in-law in ways that aren’t really appropriate. (Oh wait, he always did that last one.)

Read on for the highlights of “A Philadelphia Story.” 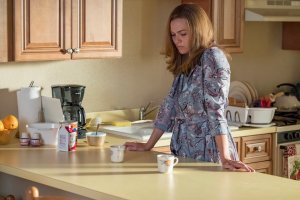 THE KIDS ARE NOT ALL RIGHT | In the past, a few months after Jack’s death, Rebecca and the kids are living in a rental in Bethel Park, Penn. Everyone’s sad. Kevin is drinking too much. Kate is eating too much. And Randall… well, he’s the one member of the family who seems to be coping OK-ish, but he’s still not great. The Pearsons get a little lift when a big white envelope from Howard University arrives for Randall: He got in, and as Rebecca hugs her son in congratulations, you can see her fighting her grief that Jack isn’t there to share in the moment.

Kate is happy for her brother but scowls when he says he’s sure she’ll hear from Berklee School of Music any day now. And when the four of them are touring a potential new house, we find out why: Kate never sent in the tape she made for her callback audition, so she’s not going to college there in the fall. And then Kevin chimes in that he’s not going to college, either.

It should be noted that Rebecca has been hearing and responding to Jack’s voice throughout the episode. It should also be noted that Mandy Moore here looks like an actual normal person wrecked by losing the love of her life (rather than the luminous creature that she actually is), so kudos to the hair and makeup team. Anyway, when an angry Randall finally confronts his mom about how she promised they’d be OK but things seem to be sliding off the rails, she’s got no fight left in her.

“It’s a struggle for me to get out of bed every morning. It takes every single ounce of energy I have, and then I have nothing left for the rest of the day. Nothing,” she tells him, acknowledging that it’s not fair to her kids, “but I can’t seem to stop it.” We then learn that she and Jack had toured another house months before theirs burned down; the voice she’s hearing is from her memory of what Jack said as the looked around the home, not some kind of auditory hallucination brought on by grief. At the end of the bittersweet memory, Rebecca admits that she’s not into the idea of moving, because she loves their imperfect little home, and they joke that they’re going to live there forever. (Side note: Sniff!)

Later that night, as Randall celebrates his Howard acceptance with Yvette and her family, he seems to come to a decision. And when he returns to the rental, unbeknownst to his mother or siblings, he calls Howard to rescind his decision to attend school there because he has to “stay close to family.” 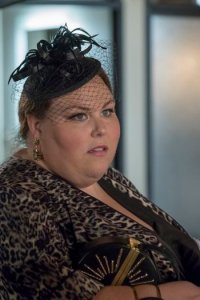 TOBY EXPLODES (AGAIN) | Toby and Kate’s decision not to mention their IVF plans to anyone in the family backfires big-time when Miguel inadvertently discovers their syringe and vial of fertility drug in the fridge. Rebecca is oddly quiet upon learning the news; when Kate presses her, the older woman admits that she’s worried, because egg retrieval is a dangerous procedure for “someone your size, Kate.” Their argument continues as the foursome head to Kevin’s, where they’re assembling before heading to the premiere of his movie, Hill 400. Rebecca just can’t understand why Toby and Kate won’t consider adoption instead. Kate says she wants to have her own baby, “and I’m the only one in the family who’s gonna carry on a piece of dad.”

Kevin takes instant umbrage at this statement; Kate scoffs that he’s probably not going to have kids, so what does he care? Kate, Rebecca, Miguel and Kevin are yelling at each other when Toby interjects and shouts, “Shut up! Everyone just shut up!” He rants about how everyone needs to stay out of his and Kate’s business, and “Please, for the love of God, save the asinine commentary from the cheap seats.” Then he leaves to clear his head, saying he’ll meet them at the premiere. He’s not wrong… but he also ain’t right. 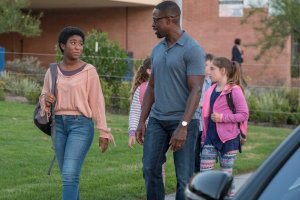 NO GOOD DEED GOES UNPUNISHED | Randall, meanwhile, brings Deja to the rec center near William’s old building so she can be around girls of color her own age. While she’s making friends with a girl named Sky, Randall chats with Sky’s mom, Gigi. (Hi, American Gods‘ Yetide Badaki!) Through flashback we learn that Gigi was a Nigerian immigrant and widow whom William befriended when she was new to town; I kind of love the way that present-day Gigi has very little time for Randall’s naïve optimism about how he’s going to fix everything that’s wrong with the falling-apart rec center.

For example: He spends the entire day tracking down a councilman who promises that he’ll send a maintenance crew to the facility… but never does. So Randall takes it upon himself to replace the broken and burned-out lightbulbs in the streetlamps near the center’s basketball court. Though it’s a good thing he does, Gigi chides him for only seeing the center’s (and its community’s) faults. “We are not our problems,” she gently criticizes; he replies that he knows that… but that he’s gotta get to a big movie premiere, so he leaves. 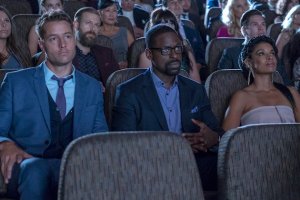 KICKING AND SCREENING | Everyone, including Beth, makes it to the premiere on time. Before Toby arrives, Kate freaks that she won’t be able to take her fertility shot on time, because Toby usually gives it to her. So Rebecca steps up and accompanies her daughter to the ladies’ room, where she sticks her with the needle and explains that her judgment about IVF is tied directly to her “paralyzing” fear of Kate being in harm’s way. “You’ll see when you have kids,” she says, adding that she should’ve done more to help when Kate started putting on weight after Jack died. Kate says that she was almost 18 and could’ve made better choices, herself, and they’re both in a better place afterward.

Toby gets there before the movie begins and apologizes to everyone. Kate wonders why he’s acting so oddly, but he blames it on jetlag, and she seems to buy it. For now.

Randall is in a great mood before his brother’s big evening… until he asks for a quick recap of the day in Pearson news, and Kevin relates the story about how Kate said she was the only one who could pass on a piece of their father. While Kevin’s prattling on about how offensive that is to him, we watch Randall visibly crumble, slumping in his seat as he considers what his sister has said (and clearly thinks). And just as he’s about to discuss it more with Kevin, the movie begins and they stop talking.