We know that things in Midnight, Texas aren’t always what they seem… but it sure looks like town newbie Kai is walking on water in this new Season 2 trailer, doesn’t it?

NBC’s supernatural drama recently released footage from the upcoming season — premiering Friday, Oct. 26 at 9/8c — and it gives us a good look at Kai (Lost‘s Nestor Carbonell) and Patience (Veronica Mars‘ Jaime Ray Newman), the couple who have moved into the community to run the newly revamped hotel.

The place is haunted (which we knew), apparently by at least one ghost that wants to drown Mandred (this is new information). And when the psychic medium narrowly escapes a watery death in the promo, he thanks Patience for ignoring his mandate not to try to save him no matter what happened.

“I never listen,” she says. “Just ask my husband.” 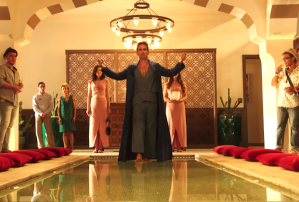 Speaking of Kai, we watch him do his best Jesus impression in front of a bunch of people who seem like acolytes. We also get glimpses of:

* Some new lady vampires in town

* Joe being a glowy badass

* Manfred walking around town at night in his skivvies, which is probably related to the character’s “demon cancer“?

Press PLAY on the video above to see it all, then hit the comments: What are you looking forward to most this season?