As it turns out, Power‘s known mobster and longtime convict Tony Teresi is an even more loathsome guy than he first appeared.

In this week’s episode, Tommy’s dad finally shows his true self. I know you’ll be shocked, but the old man doesn’t have one iota of concern or regard for the child he abandoned all those years ago. But he does really like that selling out the son he barely knows greatly increases his chances of getting out of jail early.

You’ve gotta give it to him: The guy’s a weasel, but he’s a crafty weasel.

Elsewhere, Tasha learns about Ghost’s recent vigilantism and Angela once more proves she’s one of the smartest minds in the room (when she’s not trying to obstruct justice, that is).

Read on for the highlights of “Are We On the Same Team?”

‘OBSTRUCTION OF JUSTICE, ROUND 2’ | While Internal Affairs investigator Blanca Rodriguez is realizing that Ray Ray interviewed Raina days before they were both killed, and that Angela was at Tariq’s school and Ray Ray’s apartment, Angela pushes Tameika to let her move forward in grabbing Diego Jimenez while he’s in town. “We have a rock-solid arrest warrant,” Angie says excitedly. But her boss tells her to slow her roll: The Jimenez organization is monstrous, especially now that Lobos is out of the picture, and she’s worried that nabbing just one of the hermanos won’t cut it.

Meanwhile, after another visit in which Blanca asks uncomfortable questions — and Angie begs off answering them, saying that she can’t because she’s involved in an investigation — Angela demands another daytime, high-visibility meeting with Tasha… who demands that Angie do whatever she can to throw Blanca off the scent. “Obstruction of justice, Round 2,” Angela says, but she still does it: By the end of the episode, Donovan and a couple of agents visit the IA officer and confiscate her files pertaining to Ray Ray. She hollers that Angela is all wrapped up in it, but because she has no proof, there’s not much that she can do.

But back to that meeting: Angela also mentions that, if she can’t stop Rodriguez, Tasha may have to pull Ghost into their little alliance. Tasha says HELL NO, because “Ghost can only make things worse.”

What Angela doesn’t know is that Tasha has just learned that Ghost stabbed to death the drunk driver who killed the son of the couple in their grief group. But it only made things worse for the family — the police suspect the grieving father — and Tasha is irked that her husband spent his rage on a stranger. “You can’t kill Dre. You refuse to kill Kanan. And now, for some f—kin’ reason, you’re a vigilante?” she wonders. But Ghost says he had to make just one thing right, and damned if Omari Hardwick doesn’t sell that line and sell it hard. 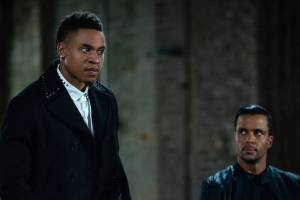 DIEGO THE MICROMANAGER | Over at Dre’s organization, things are in a wee bit of chaos. 2-Bit bristles at Arturo’s repeated assurance that he killed Lorenzo. Diego shows up, demands to be present when Arturo kills some guys who are still loyal to Lorenzo, then ensures that Cristobal is Dre’s Number Two — and Dre doesn’t love that. Meanwhile, Kanan starts worming his way into the organization by sweet-talking a disgruntled 2-Bit. And K later buys his way into Tommy’s product-pushing scheme by stealing a whole bunch of Dre’s money from Cristobal, then dropping the gajillion dollars in a gym bag at Tommy’s apartment. 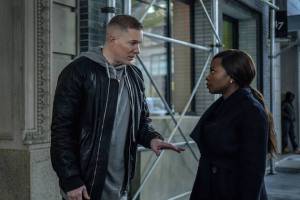 Speaking of Kanan and Tommy’s place: He and Tasha eventually both wind up there, looking for Egan, and it gets ugly quickly. She blames him for Raina’s death and Tariq’s life of crime. He seems amused, then grabs her arm and gets menacing and potentially violent and TASHA I NEED YOU TO GET OUT OF THERE RIGHT NOW. She does, and when she sees Tommy, he reassures her that Kanan will be gone soon. 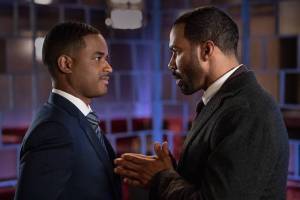 ROMANCING AN INVESTOR (LITERALLY) | Councilman Tate and Ghost pitch the Queens Child Project to a potential investor named Linda, but she’s not into it. (Side note: How in the heck did Tate get so far in politics when he has absolutely zero poker face?) Later, Ghost has dinner with her to try again; naturally, they wind up having rather athletic sex in her hotel room. And he thinks he’s sooooo slick… until Tate says that Linda thought he was unprofessional, and by dropping the D on her, he proved it. “She played me,” Ghost realizes. “You played yourself,” Tate says.

Speaking of sex, Angela gets all snuggly with Steve Tampion, a Fed from D.C. And she screens a call from Ghost before, so it’s a double win! And speaking of wins: Angela realizes that hermanos could mean “brothers” — as everyone has assumed this whole time — or it could mean “siblings”… and that the woman who’s been spotted with Diego isn’t his wife or girlfriend, she’s his sister and a huge player in the cartel. Methinks it’s time for some warrants!

REVELATIONS | Saxe and Mak meet with Teresi and say that they know Egan is his kid and that, maybe if he gives them some information they can use, the old man will be able to get out of jail before his wife succumbs to cancer. Teresi starts laughing hysterically and confesses that that was his plan all along!

So Teresi is freed, and Tommy comes to pick him up from jail. They plan to get a slice of pizza and see the ailing Connie. “Then you and me?” Teresi tells his unwittingly trusting son. “We’re gonna get into some trouble.”

Meanwhile, Tasha drives Tariq to Choate and — after thinking about something LaKeisha told her — apologizes for keeping so much of her true life from him. She and Ghost “didn’t want you to know what the streets were like… we thought we were protecting you, but all we did was teach you how to lie.”

Tariq confesses that he saw Ray Ray shoot Raina, then cries as his mother hugs him.

Back in NY, Ghost calls Tommy to tell him he can launder money through the clubs like before (earlier in the episode, he’d said no) and that Ghost will take a “service fee” for the convenience. Oh, and if Ghost finds out Tommy is messing around with Kanan (which he totally is; see previous re: gym bag), all bets are off.