It’s been a minute since Power‘s Tommy got himself into some big, hairy trouble. Don’t worry — he more than makes up for that in this week’s episode.

Mr. Egan finds himself in two kinds of new trouble by the end of the hour, and at one of the complications seriously messes with Ghost’s plan to avenge Raina’s death. On the bright side: Watching Tommy tap dance on some very volatile landmines is always entertaining — and he does plenty of shuffle-ball-changes in this week’s installment.

Read on for the highlights of “Damage Control.”

JASON IS BACK! AND MAD! | After the Jimenez Cartel gun down some Serbians attempting to offload a boat full of drugs in the Port of Los Angeles — and take control of the product — Jason very angrily holds Tommy responsible. Remember when Egan talked a big game last season about how he could open up the West Coast for the Serbians? While that’s news to Ghost, there’s no time to discuss it at present, because Jason’s guys have very large weapons trained on Ghost, Tommy and Kanan.

“Now you owe me $2 million,” Jason tells Tommy, adding that he’s not happy to see Egan so cozy with Ghost again. Tommy starts talking a mile a minute, promising to secure the L.A. port for Jason, even if it means killing the Jimenez twins to do so. Ghost notes that that’s a suicide mission, but a slightly mollified Jason doesn’t care. Oh, and he expects Ghost and Kanan to help, because they’re part of this now, too.

After the big man leaves, Ghost is ticked: They don’t have access to the Jimenez the way they did to Felipe Lobos or Milan, meaning that killing them is going to be a heck of a lot harder. But then Kanan, who is quickly becoming the Three Amigos’ chief strategist, notes that Dre can lead them right to the drug lords they seek: They’ll kill the siblings, then kill him. “This is a beautiful idea, K,” Tommy says, excited, but Ghost is grumbly that he’s got another potential murder or two on his hands.

DRE’S UNDERLINGS GO ROGUE | Speaking of the Jimenez kids, Diego doesn’t see Dre’s arrival at his apartment as any reason to stop having sex with two women up against the floor-to-ceiling windows. And the moment he’s done, he starts talking business (in the buff), outlining how the Feds raided a Toros Locos house and seized 86 kilos of his product. Diego wants Dre to make up the money he lost in the raid, and he tasks Dre with dealing with the power vacuum left after Toros member Uriel was killed.

Dre decides to back the less experienced Toros guy who wants to be boss, rather than the one who’s been around for a while, because Dre thinks he can control the younger man. Dre has a plan in place (and it involves killing the hitmen, as well, so that the hit can’t be traced back to him), but that gets blown to pieces when 2-Bit and Spanky happen to run across Lorenzo, the targeted Toros member, while they’re out for a drive. 2-Bit shoots him dead, then can’t understand why Dre and Cristobal are livid upon hearing the news. “The Jimenez and these clubs really got you thinking you’re better than everybody else?” 2 Bit yells at his former equal. Dre reminds him in no uncertain terms that he’s the boss now. Meanwhile, in a car across the street, Kanan sees (and, because they’re shouting, likely hears) all.

Later, Dre meets with Arturo, the younger Locos member, and acts like he thinks Arturo killed Lorenzo. And Arturo acts like he did it. 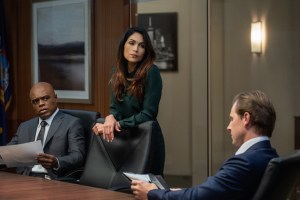 GETTING CLOSER… | Meanwhile, the gold gun used to kill Uriel ties that murder to the murders of the couple we watched die in the Jimenez penthouse last season, which leads the AUSA’s office to surmise that the Jimenez are the Toros Locos’ connect. This is huge because, if they can connect the siblings to the killings, it’s a major win for the Feds.

Later, after a brief (and incredibly guilty) run-in with the oblivious Information Technology worker whose login she used to delete Tasha’s gun records, Angela peruses the security footage surrounding the couple’s death and realizes that Diego Jimenez and a woman — remember, the Feds are working under the assumption that the other Jimenez is a brother, not a sister — left the building that same day and are likely still in the country. Angela posits that the woman is Diego’s wife, and if so, “I can get her to talk.” 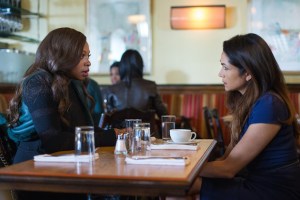 THE MISSING LINK | Angie is rather self-assured in front of her co-workers, but she’s far less certain regarding the whole Tasha/Tariq mess she’s gotten herself into. She spends much of the episode trying to figure out if anyone else can link Tariq to Ray Ray; the consensus is that only Brains and Big Country from Kanan’s burglary ring would be able to, and they’re either dead or assumed so.

After attending a parental grief support group with Ghost and making an impassioned (if forced, thanks to that sneaky, sneaky Councilman Tate) speech at a press conference, Tasha takes a little heart in the fact that Tariq is going to attend Choate and get away from all of the insanity at home. “Do I know everything now?” she asks her son, who answers in the affirmative. “I’m going to make better choices from now on, Ma. I promise,” he says. But there’s still the matter of Destiny, Ray Ray’s cousin, who punched ‘Riq’s v-card and can very easily place him in the dirty cop’s orbit… Everyone else may have forgotten about her, but I can guarantee you that Internal Affairs investigator Blanca Rodriguez hasn’t… 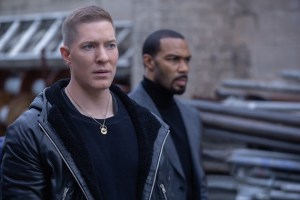 THE ITALIAN JOB | Sammy shows up at Tommy’s door and demands that Egan come with him. They wind up in the back of a mechanic’s shop, where a badly wounded Carmine — one of the young, Italian hitters Tommy hired to capture Dre last episode — is slowly bleeding out. His boss, Vincent (the guy with the smoothie from the premiere), doesn’t know exactly what went down, and Tommy thinks that killing Carmine is the cleanest way out of this mess. A horrified Sammy stops him, saying that’s not how they handle things. And when a lifelong mobster is shocked by your coldblooded actions, Tommy, perhaps that’s an indicator that your moral compass needs a new magnet, eh?

Tommy visits Tony in prison, but his dad is unsympathetic to his plight: In coded language, he advises Tommy to confess all to Vincent and take any subsequent punishment “like a man.” Also, Teresi adds, “You should’ve come to me first.”

Things get more complicated when Carmine dies in the back of the auto shop. So Tony slinks on his belly to Vincent. When Sammy vouches for Tommy, Vincent lets Egan go with a promise to take a 50 percent loss on the weight they discussed in the previous episode; also, Tommy will make restitution to the dead hitters’ families. After he leaves, Tommy is ecstatic that he’s still breathing — and that’s when Sammy punches him hard, twice, in the head. He covered for Tommy, who lied to Vincent about killing Dre for killing the hitters, but “I’m not lying for you ever again,” the older man warns him.

Back at the AUSA’s office, thanks to the prison’s visitors’ logs, Mak & Co. make the connection: Tommy is Teresi’s son.

PAYBACK FOR A STRANGER | From a distance at the club, Ghost sees Dre and Diego Jimenez being all chummy. He makes a call to Angela — his second of the episode — but she lets it go to voicemail. And then Ghost takes all of his pent-up range and sadness, finds the drunk driver who killed the child of two of the parents at his grief group, and stabs the man to death in an alley.