Remember when Nashville‘s Avery was crying and pleading with Juliette to leave her Bolivian cult facility, but it really seemed like she’d been brainwashed into staying? Turns out, all it took to flip her switch was a little human-rights infringement and an unplanned pregnancy. Easy-peasy!

Don’t get me wrong; I’m more than happy that this week’s episode gives us no sign of the Juliette-bot we saw the last time we visited The Movement for Coherent Philosophy’s South American outpost. But shouldn’t there have been some explanation for how Ms. Barnes snapped back to being her feisty self after months as the cult’s passionless plaything? Like, did that overworked “volunteer” faint in the yard and all of a sudden Ju was like, “You know what? I am being totally railroaded by this Dr. Phil-wannabe and his stupid, pseudo-psychological BS. And while we’re on the topic, why does everyone in this place wear ill-fitting sweaters?”

Or, as the CMT drama continues its slow slide to the series finale, maybe I should just light a candle at the altar of St. Reba in thanks for the fact that Ju manages to escape the movement’s clutches in the most unbelievable way possible. Because Alannah is on a mission, y’all, and Ju can’t get back to Music City quick enough for my tastes.

Read on for the highlights of “No Place That Far.”

ME TIME IS OVER | Juliette is working outside at the center when a woman toiling nearby passes out. The fainter has worked at 12-hour shift without a break, Ju huffs at a staffer looking on with very little interest, and she wasn’t allowed to take a break. The staffer parrots some line about how all of the “volunteers” choose how long they work, but Juliette says she’ll take it up with Darius when he returns.

So she does. And, as usual, the movement’s founder says all the right things, including promising her that he’ll deal with anyone who threatens the well-being of his little community. This mollifies her a little bit, but she makes it very clear: “I’m gonna help make things right, and then I’m going home.”

That earns her a visit the next day from Bill and Sharon, two of Darius’ henchmen, who are handling Juliette now that Darius has once again gone traveling. She comes at them hard, spitting threats and raising her voice, which gives them all the ammunition they need to treat her like she’s a threat to the community. They lock her in a room until her “agitated state” abates, with a soldier posted outside the door until she has a “chance to calm down.” An irate Juliette also gets a constant companion/minder named Rosa (played by Mia Maestro, who’ll always be Alias‘ Nadia Santos to me!), who’s ostensibly there to make sure that Juliette isn’t a danger to herself. 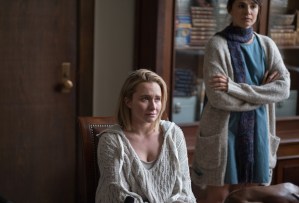 DIGGING IN DEEPER | The next day, Sharon and Bill cite Juliette’s “erratic behavior, baseless accusations [and] physical threats” as reasons why they held the country star against her will. I mean, have you met her? That’s just a normal Tuesday morning in the ol’ Barnes/Barkley household. The pair is holding Juliette’s passport, which they tell her she’ll get back once she figures out why she’s so angry. Or, they’ll tie her up. “Are you ready to accept help, Juliette?” they ask with their simpering, gaslighting, extremely punchable faces.

Back in her room/jail cell, Juliette lashes out at Rosa, saying the woman has lost all self-respect and dignity. This makes Rosa cry, which in turn makes Juliette’s antennae twitch. But when Ju wonders what dirt the movement has on Rosa, her minder tells her to hush up. “You’ll make it worse,” she whisper-shouts.

In the middle of the night, Juliette wakes up and barfs. Rosa comes in to see what’s the matter, and Juliette tearfully tells her she’s pregnant — and that her medical work-up she apparently received when she arrived in Bolivia didn’t catch it because it was too early in her first trimester. Though Rosa is skeptical, she slips out and returns with a pregnancy test that turns out positive.

THE GREAT ESCAPE | Concrete proof of the lil’ Barkley growing in her belly seems to galvanize Juliette, but Rosa refuses to help her escape. Turns out, the woman has a good reason: She has a son on the compound somewhere, but he was taken from her by the cult’s Powers That Be and he’s on lockdown. “I’m not allowed to see him,” she cries to Juliette, adding that fighting is futile: “The only thing you can do in this place is submit.”

That gives Ju an idea: She fakes a breakthrough — and total acquiescence — so that Sharon and Bill will back off a bit. Then she, along with a reluctant and scared Rosa, retrieve her passport and her file from the main office. (There’s a complicated sequence of events to get there; all you really need to know is that they’re successful.) Just before she scoots, Juliette says they’re going to grab Rosa’s son and go together, but the other woman says no. “I’ll come back for you,” Ju promises, and when Rosa says she won’t, Ju retorts, “You don’t know me.” Then they hug and Juliette runs.

Even though she’s in the middle of nowhere, Bolivia, a van happens by. “Por favor, aeropuerto!” Ju cries, and the driver is like, “OK!” And you know what? I want her back in Music City so badly, I’M JUST GOING TO GO WITH IT.

Side note: Is it me, or was this whole Ju-in-a-cult plot awfully light on the terrible details? Maybe I’ve just watched too much Leah Remini: Scientology and the Aftermath, but I expected to see some true horrors at the movement’s stronghold: members cleaning toilets with their toothbrushes and reporting on each other, that kind of thing. After so much build-up, the cult seemed more like an especially strict boarding school than any kind of real threat to our resident spunky blonde, no? 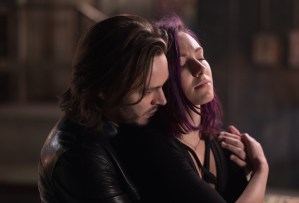 CRAZY IN LOVE | Anywhoodle, back at home, Will is attempting to mediate between Gunnar (“Of all the girls in Nashville, you had to pick her!) and Avery (“You said it was over”) when Alannah walks in and promptly walks out. Avery finds her and apologizes a lot, and she suggests that maybe she should leave the band. When he protests, she’s all, “Um, Brad approached me?” Translation: She’s basically already made up her mind. “No matter what happens with the band, it doesn’t have to change this,” Avery promises, stroking her hair. “But could it?” I reply.

In case you’re worried about Gunnar and Avery, they have a beer together and make up, with Avery alerting his bandmate that Alannah is probably going to leave. “I guess I’ve gotta go back to singing the high, girly parts again,” Gunny says. (Ha!) Avery admits that it still feels like he’s cheating on Juliette, but that he’s scared by how much he likes Alannah. I get it, Avery: I’m scared by how much you like Alannah, too.

Eventually, even though Jessie gives Alannah a friendly warning to stay away from Brad, the purple-haired chanteuse signs with Shiny New Records. Then she drinks a little too much at her signing celebration and calls Avery to inform him that she is Seriously Messed Up. “If you saw it all, you’d never want to be with me,” she sob-talks into the phone, and Avery, you need to RUN because it is FAR TOO SOON FOR THIS INSANITY. She leaves the call on a vaguely troubling note, so OF COURSE Avery hustles over to her apartment, where OF COURSE she’s a hot mess who insists that he shouldn’t have come but is secretly pleased that he did. (Side note: That last observation is not based on any of Rainee Blake’s acting choices and is instead informed by my knowledge of me/every girl I knew circa sophomore year of college. And junior year.)

But Avery is used to faaaaaaaaaaaaaar more terrible behavior than this, and he calmly tells her that he’s not scared off by her messiness. “Maybe we can be messes together,” she says. 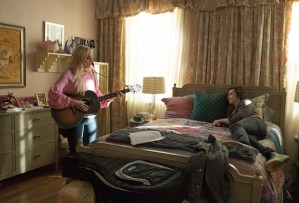 TWIG SNAPS | Maddie plays Twig a song she wrote. He mixes it for her and she loves it. Then Twig confesses that he likes her, and he tries to kiss her, but she backs away and things become incredibly awkward between them. By the end of the episode, they’re on the path to being friends again — but she doesn’t know that Jonah never actually broke up with Mia. Oh yeah, and Twig has been covering for him this whole time…