If you’ve read these Nashville recaps for a while now, you’ll understand that what I’m about to say is more painful than any other admission I’ve ever made to you good Nashie folk:

I… [whispers] I think Gunnar is in the right in this week’s episode.

I KNOW. What is happening? I have never, ever agreed with any Gunnar thought, romantic choice or hairdo in the show’s entire six-season run. Can we attribute this anomaly to almost-end-of-series nostalgia? A human growth hormone high? Misplaced grief over Juliette’s several-episodes-and-counting absence?

Who knows? It’s a turvy-topsy world when I’m yelling at Avery and thinking Gunnar makes some good points, but here we are.

Read on for the highlights of “Two Sparrows in a Hurricane.” There are a lot of all-caps. I apologize in advance.

MOURNING STAR | Daphne’s time on Brad’s country-music reality competition begins, and they’re barely done with the first day before Brad is leaning on Daphne to write a song about her dead mom. It’ll help her be a real artist, he argues, while conveniently leaving out the fact that the strong Rayna Jaymes connection will certainly drive up ratings for his series.

So Daph writes a sweet, sad tune called “Crashing Memories,” even though Deacon is adamant that his younger daughter not be pushed into exploiting her grief for the cameras. And when she performs it on stage during the taping of the show, it’s a huge success: standing ovation, and a “yes” from all three judges, including Brad. But as soon as Daph comes off stage, she’s sobbing into Deacon and Maddie’s arms. Oh, honey.

OVER AND OVER AGAIN | The most space I’m giving Scarlett’s storyline this week is a (n admittedly long)sentence, because she pushes PTSD-suffering Sean into playing another open mic, even though he says he doesn’t want to, and then he performs and it’s great but it causes him to kiss her and then have a breakdown about the horrors he faced while in the military and even though the episode ends with him smiling and saying he’s going to continue to sing, WHAT IS YOUR PATHOLOGICAL NEED TO KEEP FLICKING AT THIS FRAGILE VASE OF A MAN, SCAR? 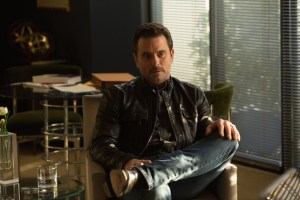 SOMETIMES, GOLIATH WINS | Jessie’s new attack dog of a lawyer says she can win the custody battle against Brad, but it’s going to take money and it’s going to require Jake to testify. Deacon quickly volunteers the cash — after all, he’s all wrapped up in this, too — but Jessie refuses to make her son take the stand. Then she has about three breakdowns about what a mess her life is, ultimately deciding not to fight her ex in case she loses and therefore loses Jake altogether. So she and Deacon sadly agree to part ways, both of them crying after it’s over. (But is it really over? It’s probably not really over.)

AVERY, ALONE | Gunnar apologizes to Avery for coming after him in the previous episode, and Avery doesn’t mind at all. Of course, he tells his friend, he’d never go after a woman Gunnar was so openly into. And if you think things are kind of weird at practice — “Does this whole band need to go to couples’ therapy or what?” observes Will, who’s there to check out a new song — Alannah’s like, “Hold my six-string.”

After rebuffing — probably for the last time — Gunnar’s romantic overtures, she hightails it to Avery’s place, where he’s feeling a little lonely. They have a drink before setting out for the evening’s show, and that’s when she gives a big monologue that on the surface is all about seizing opportunities but in the subtext is basically take my clothes off NOW. They kiss. I’m a little disappointed in how quickly Avery is being taken in by this low-key manic pixie dream girl, given how easily he called Juliette on her ish back in the day, but maybe he’s rusty? Anyway, they’re kissing, and kissing, and even more kissing in the parking lot near the venue… and that’s where Gunnar sees them and seethes. 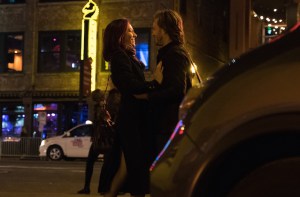 But Avery and Alannah don’t know that Gunny witnessed their nookie. So as the pair are eye-shtupping each other from across the stage during the gig that night, Gunnar does the most baller thing I’ve ever seen him do: He stops playing the drums IN THE MIDDLE OF THE DAMN SONG, Y’ALL and leaves. I love that he’s like, “You can take my girl, but you shall never take my crowd-pleasing beats!”

In the dressing room afterward, Avery says he never thought of the consequences of their actions. Then Alannah launches into some talk about how women always have to consider consequences of their decisions regarding men, which is true but somehow also insufferable in the way that she twists it to mean that she thinks Avery is worth whatever trouble Gunny throws her way. “I’m sorry if that was a mistake,” she adds.

Next time we see Yoko, she’s taking a meeting with Brad, who promises her a solo album, tour and fat advance check, and she’s not saying no…