Nashville‘s Alannah, I see you. And not in the life-affirming, loving way.

More in the “Stop messing with an already screwed-up situation” way. The “Juliette may be outta town on the most ill-advised of walkabouts, but that doesn’t mean you can move your Manic Panic jars into Avery’s bathroom just yet” way. The (and I can’t believe I, of all people, am saying this, but…) “Stop breaking Gunnar’s heart because, good Lord, can’t you see he’s the softest of all possible soft boys and you are going to reduce him to smithereens?” way.

Yep, the CMT drama is back to finish out its final season, and I. Have. Feelings.

Read on for the highlights of “Pick Yourself Up.”

HEARTBROKEN | Right after Will is rushed to the hospital after collapsing during The Chew performance in New York, his doctor informs a worried Avery, Gunnar and Alannah that their bandmate is suffering from a heart infection. “Are any of you aware that he was using needles, injecting steroids?” the physician asks, and I scream “HIPAA violation!” at the screen, to no avail. Avery and Alannah are shocked to hear that Gunnar knew. And Gunnar is so mad that he yells at Will when they visit the next morning, saying that he’s been “stupid” about putting himself at so much risk. Will jokes and apologizes, but he looks rough.

Will’s doctor tells him to take it easy, saying that he might need surgery, because there’s “something ambiguous on your mitral valve.” He also nixes the idea of playing shows anytime soon, a fact that Will blatantly ignores when the band is given the opportunity to fill in for Lady Antebellum at the upcoming Music City Music Festival. 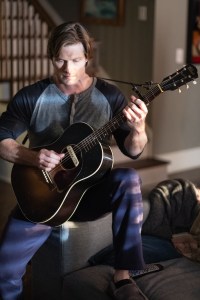 Several people in Nashville are relieved to hear that Will is OK. These include Scarlett, who brings him healthy food and urges him to write songs while he’s laid up, and Zach, who surprises his ex with a home visit. Though things between the two of them start off rather icy, at least on Will’s part, it’s clear Zach still cares for him, and they’re kinda flirty by the time Zach takes off. (His mention that he and Hot Mark broke up might have something to do with it?)

By the end of the episode, Will has eaten a banana and written a song. Progress? Yeah, I think it’s progress.

JESSIE’S MESS | Deacon can’t apologize enough for how he inserted himself into the Jessie-Brad-Jake situation, and even though Jessie understands why her boyfriend roughed up her ex a little, she can’t help but acknowledge that it’s “going to make things a lot worse.” Deacon mentions that, in addition to wanting Brad to lay off Jake, the incident made him flash back to the way his own father treated him, which was not great.

Like he promised, Brad sues Jessie for full custody of their son. And when a lawyer informs Deke and his lady that his past brushes with the law (drunk and disorderly charges, violence, etc.) kinda support Brad’s claim, Deacon thinks the only option is for them to break up so Jessie can say Jake is in no danger from him being around. Thing is, neither of them want that. So they both tear up a little and vow to fight Maitland… though they have no idea what that will look like or how they’ll win. 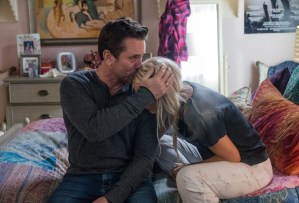 HAIR OF THE DOG, MADS? | Maddie spends much of Jonah’s “birthday week” knocking back booze with him and his friends while Twig stares at her longingly. Things Mads does not know: a) That Jonah’s ex, Mia, has been texting him on the regular, and b) how to cover up a hangover. When she comes down to breakfast and nearly barfs into her bacon, Deacon immediately orders her upstairs so he can yell at her. She’s 18, he angrily points out, and the daughter of an alcoholic — what the heck was she thinking?! She screams back that she’s an adult. “Not in this house, you’re not!” Deke counters. Her response? “Then maybe I should move out!”

They’re both crying as he calms down and explains that alcohol was the reason that he lost so many years with Rayna and with her; he doesn’t want his daughter to repeat his mistakes, especially if her genetics make her more susceptible to addiction. She promises to be “careful,” and he seems to be OK with that. Meanwhile, I’m ready to sit on this child’s chest until she quits exhibiting any signs of reverting to Season 4 Mads. Get comfy, Maddie, because I can wait as long as it takes…

Ultimately, Maddie agrees to spend a few nights at Scarlett’s, just to see how living on her own might feel. But when she sees how upset Daphne is at the prospect of her big sis moving out, Maddie decides to stay put. 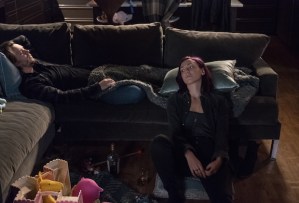 ALANNAH’S ANGLE | Alannah isn’t doing great at hiding her growing attraction to Avery, but he’s so distracted by Juliette’s continued absence that he doesn’t notice. Meanwhile, Gunnar has noticed how his ladyfriend doesn’t ever want to stay the night — just spitballing here, Gunny, but maybe that’s because both of you seem to take off only the barest minimum of clothing before you hit the sack? — and he has to badger her into wanting to go out for a proper date with him.

One night, Alannah goes directly from making the guitar with two necks (what? After six years of recapping this show, I’m getting desperate for sex euphemisms) at Gunnar’s to swinging by Avery’s for a little talking, drinking and dancing it out. Avery seems happy just to have a conversation partner who’s not likely to decamp to Bolivia in the middle of their chat; they both fall asleep in the living room, and he thanks her the next morning for the support.

But when Gunnar sees tabloid photos of his woman sneaking out of his bandmate’s house in the morning — during the aforementioned date, no less! — he loses it. He rushes to the studio and says he’s going to take Avery down, but it’s Gunnar, so of COURSE that isn’t going to happen. The saddest part, I think, is that Gunny is less angry that Alannah might have slept with Avery and more angry that she didn’t bolt out of his house as soon as possible like a scared rabbit. “Did you cuddle?!” Gunnar yells. Aw, guys, Gunnar just wants someone to be his Big Spoon. May I humbly nominate Will? He’s got a broad chest, strong arms and a medical order that is tantamount to bedrest. Plus, he and Gunnar did kiss that one time…

Now it’s your turn. What did you think of the midseason premiere? Hit the comments with your thoughts!