Avery, I’ve implored you to stop this insanity, but this week’s episode of Nashville makes it clear: We’ve both wildly underestimated the severity of your situation. When it comes to extricating Juliette from the clutches of a low-key cult, you’re gonna need reinforcements.

When Juliette extends her stay in Bolivia — without answering a single phone call or message from her worried baby daddy since she left weeks before — Avery decides it’s time to get on a plane and bring his lady home. Problem is, Juliette has zero desire to return to Music City or the life she led there. Is she brainwashed? Does she really just need time to think and grow? I’m leaning toward the former, and from the looks of Avery’s tearstained face, he’s right there with me.

Meanwhile, a bit farther north, Alannah is totally going to be the death of the guys’ new band, and Deacon and Jessie finally get it on. Read on for the highlights of “Can’t Help But Wonder Where I’m Bound.” 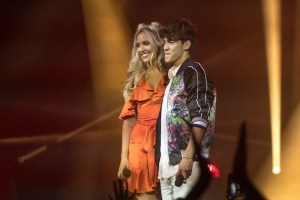 WHAT A SHORT, STRANGE TRIP IT’S BEEN | Maddie flies to Miami to meet Jonah; she’ll perform with him at his concert, then hang out with him and the guys for the rest of the weekend. The pop sensation is sweetly attentive to her for the five minutes that he’s in town… but the morning after the show, he announces that Richard Linklater wants him to read for a role in a new movie, and he’s got to go to Texas to do it. Rather than bring Mads with him, Jonah encourages her to stay with his entourage, who are seeming more and more to me like an idiot version of the Life and Death Brigade. When two of the juggleheads offer Twig and Maddie psychedelic mushrooms, they both pass. But then the guys peer-pressure Twig into cramming one into his mouth, and then Maddie takes it upon herself to babysit a freaked-out Twig until he stops tripping. They bond about how he was forced to grow up too soon, thanks to an absent dad and a checked-out mom, and their interaction looks an awful lot like mutual flirting the next morning. But then Jonah comes home and everything is back to normal, though Twig looks disappointed. (Side note: I’d wondered if maybe Twig was in love with Jonah, and not crushing on Maddie, but this episode seems to answer that for me, right?) 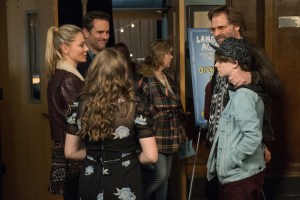 BRAD IS A BAD DAD | Both Daphne and Jake perform at their school’s open house evening, which is attended by Jessie, Deacon, Brad and his new wife. Daphne sings a lovely song she wrote. Brad does a spoken-word piece about Star Wars. It’s a little weird. And wait, Indiana Jones? And hating his dad, and being bullied? Oh god, there’s a Game of Thrones reference at the end. “I’m a wildling, y’all are a bunch of crows,” Jake says, gently placing the microphone on the stage rather than dropping it to end his number. (I don’t know why, but I loved that little detail.) Afterward, Deacon and Jessie gush over both kids’ performances, but Brad only has kind things to say about Daphne’s. He tells her she should be a star, an idea she’s clearly tossing around in her head later as she looks at an application for Brad’s American Idol-like country-music competition.

When Deacon happens to have a moment alone with Jake a few days later, he reiterates that he loved what he saw up on that stage. “The words you said and the heart behind it, it cut right through me,” Deke says, commiserating about having a father who didn’t quite do his job and offering himself as a cautionary tale who blindly accepted his dad’s lack of confidence in his abilities. He adds that feeling things deeply can be painful, but “it’s worth it. It’s a gift. You keep doing what you’re doing.” Jessie overhears all — and can’t quite believe it when Jake initiates a handshake with Deacon before leaving for Brad’s — which makes her very, very appreciative of her boyfriend’s ability to parent. 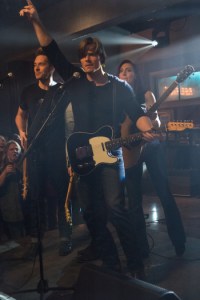 THREE GUYS, A GIRL AND A ROUGH PLACE | Will is so jealous of Alannah’s popularity since joining the band, he tries to drown her out with his electric guitar during a gig, then hits the gym so hard in frustration that he nearly passes out. Gunnar is so jealous of Alannah’s ex — even though Gunny EXPLICITLY TOLD HER he wasn’t looking for a relationship in the first place — that he gets all weird and asks her inappropriate questions, like whether she and her former partner hooked up on a night she wasn’t with Gunnar. (Still, she shows up at Gunny’s house of her own accord at the end of the episode, so that’s something.)

In other news, reporters have started contacting Bucky about the guys’ side project. But the writers don’t really want to talk to anyone other than Alannah. And when one of the journalists lets it slip that Brad alerted them to her rising stardom, Deacon doesn’t like that one bit.

JULIETTE GOES ALL THE WAY | When Juliette isn’t aboard her private jet when it returns from Bolivia, Avery calls The Movement for Coherent Philosophy’s Bolivian facility but is told that he can’t speak to Juliette. So, on Deacon’s advice, Avery flies there himself to bring his wife/ex-wife/reason for breathing home himself. Once he gets to her — which is no easy task, thanks to the movement’s stonewalling receptionist — he finds Juliette sitting in a simple blue dress in her bedroom. He’s elated to see her, but she doesn’t show much emotion at all when he embraces her and asks her to come home.

When he notes she’s not acting like herself, she says, “You’re right. I’m not the person I was. But I am more myself than I have ever been in my life.” She goes on to say that she’s lived her entire life for other people, a statement on which Avery quickly and unequivocally calls BS. He reminds her that she’s never given a damn what anyone else thought. “I understand why you think that, but you’re wrong,” she says, a little too evenly, almost as though she’s repeating something she’s been told ad nauseum. “I needed people too much. I had to control everything because I was afraid if I didn’t, I would be erased.” And then, things get real bad.

Juliette tells Avery he’s part of the problem — “You had a stake in keeping me the way that I was” — and says she can’t be with him or have anything to do with her old life “until I learn how to fill this whole in my heart on my own, not from the outside.” That means she’s not coming home, she adds, suggesting that Cadence come live with her until she’s ready to return to the United States. Avery looks like he’s trapped in some terrible dream, telling her that that is not an option. (Interesting, too, that Juliette doesn’t once mention her daughter until Avery mentions her name, eh?) Juliette drops the suggestion quickly, saying she’ll FaceTime the toddler every day.

“You are not the problem. I am,” she says dispassionately while Avery cries and tries to figure out what the hell is going on, exactly. “And I can’t communicate with you or anyone else until I can change that.” And when he literally begs her, on his knees, to come back, she pulls him close and kisses him. “I’ve already made my decision,” she states, then turns away, leaving him to find his own way out.