Avery, dude, you’ve gotta put a stop to this.

I realize that being Mr. Juliette Barnes is an up-at-dawn, pride-swallowing siege that you will never fully tell us about. I realize you’re married to a woman who, though amazing, is also simultaneously more skittish than a newborn colt on the Fourth of July and more stubborn than a retired mule roused early from a nap. I realize her volatile nature can make introducing new ideas — and here I’m specifically referencing the fact that she seems to be wading into cult-laden waters with stones in her pockets — a thankless task.

But man, you’re Nashville‘s first, last and only line of defense against Juliette the Cultbot, and we need you to fight. Because if this week’s episode is any indication, she’s one foot and three toes out the door already.

Read on for the highlights of “Second Chances.” 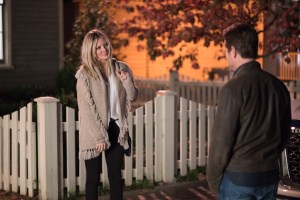 DEACON MOVES ON | Teased by nearly everyone in his life, Deacon finally decides to call Jessie and ask her out on a date. She questions him for a moment about how he didn’t seem ready before, but he merely replies, “That was then, this is now.” So she agrees… and then cancels, saying she has to deal with her son’s school-related meltdown. But the next morning, she calls back to apologize: She was using Jake’s emotional outburst as an excuse, because she’s nervous about seeing Deke romantically. So they try again, meeting up for dinner that evening. All good, right?

Wrong. The conversation is stilted. Deacon has possibly the world’s most boring reaction to her news that she’s leaving music and going back to school for psychology. And when they acknowledge the awkwardness, it only marginally lifts. At the end of the night, Jessie calls the evening a “fun, failed experiment” and accepts Deacon’s one-armed hug. But before she gets to her front door, she turns back and looks him dead-on. He returns the smoldering gaze. They walk toward each other and kiss, and it’s kind of hot. (I know, Rayna fans. I’m sorry. I hate that I don’t hate it, too.)

The next morning at school drop-off, Jessie and Deke are goofy around each other. Daphne doesn’t know they went out, but she knows something’s up, and she is not happy about it.

322ND VERSE, SAME AS THE FIRST | Scarlett sings a gorgeous tune called “Ain’t No Normal” but comes off stage and starts to cry in the green room. That leads her to wonder if she even wants to perform anymore and… Wait. NO. Nope nope nope nope no no no. I am not doing this with you again, woman. Moving on! 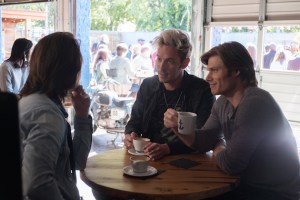 MEET THE WAG BAND | After Will and Gunnar play a high-spirited set at Barista Parlor, Avery laments that he’s got too much going on right now (taking care of Cadence chief among his duties) to join his friends onstage on a regular basis. So those goofballs do what any good friends would do: They come to his house, attempt to literally lasso him into coming with them, settle for grabbing him (and Cadence) when the rope trick fails, and bring him to the American Legion to play a set with them. Don’t worry — they’ve hired a babysitter for Cadence, and “She’s got great reviews on Yelp,” Gunnar promises. (Ha.)

The guys absolutely kill it, bringing the house down with their cover of Waylon Jennings’ “Stop the World and Let Me Off.” The next morning, Avery ably makes pancakes and entertains Cadence while a hungover Gunnar and Will are barely functioning. When Will mentions that he was hoping they could play together once a week for the near future, Avery seems hesitantly open to the idea. (Side note: I’m very open to this idea. The three of them performing together was a great shot in the arm in this episode.) 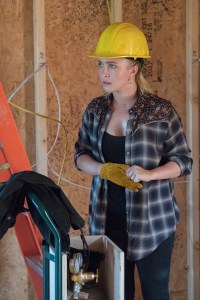 NAILED IT | Where is Juliette while all of this has been going on, you may wonder? She’s at The Movement for Coherent Philosophy headquarters again, where Darius’ right-hand woman informs her that the big guy doesn’t have time to talk with her, but that Juliette is more than welcome to accompany a group that’s heading out to help with a Habitat for Humanity-like project. Juliette balks… but then she goes. Then she’s assigned to nailing down insulation in the house’s frame. She balks… but then she does it. When she hits her hand with a hammer and demands ice, Darius’ assistant tells her to get it for herself, because “When people hand us things, we grow weak. When they refuse us, we rise to the challenge.” (Side note: As I’ve said before, it’s actually good advice, but it’s delivered so. damn. creepily!) Anyway, Juliette balks… then she gets the ice for herself. Noticing a pattern here?

By the end of the day, Juliette is joking with the movement’s other members and agreeing to stay for dinner, where Darius finds her laughing and having a great time. (Avery, on the other hand, is having less of a good time as he realizes how much his wife wants to be with her new friends. And he doesn’t even know about the organization’s mandate that members donate 30 percent of their income yet!) As she prepares to leave the next morning — yeah, she slept there — Darius warns her that going back to her home and family means going back to an environment where people are invested in her staying exactly the way she is. “It’s hard to break old habits in old environments,” he says. And when she returns home, you can just tell that she’s already mentally packing her bags.