Need to catch up? Check out the Nashville Season 5 finale post mortem here.

It’s New Year’s Eve in Nashville, yet not a single one of our Music City denizens has someone to kiss at midnight. And if that isn’t fodder for the saddest country song ever, I don’t know what is.

Scratch that: Nothing is more pathetic than a blonde (!) Gunnar getting the yips and mooning over Scarlett for the 43,000th time since the series began. (But please, no one write that song.)

One more thing, before we get into it. This Juliette nonsense with the cult is worrisome, yes? Yes. OK, good. We’re agreed. Read on as we highlight the action in “New Strings.”

A FRESH START | Deacon, Maddie, Daphne and Scarlett are taking belated Christmas photos when Bucky calls: He’s lined up a big-deal New Year’s Eve gig for her in Los Angeles. She jumps at the chance to go, but Deacon needs a minute: It’s the first holiday season since Rayna died, after all, and he’d expected his family to spend it together. But he gets over it quickly, giving his OK but asking Scarlett to tag along as chaperone.

Throughout the hour, several people — Daphne, Scarlett, Zach, even Jessie’s slimy-yet-entertaining ex Brad — gently nudge Deke to get back out there and start dating. He protests “all this Match dot Timber” nonsense (heh) but secretly starts a profile on a site called Kissmet. Still, he can’t bring himself to go through with it. But his grumpiness about the matter fizzles when he realizes that Scarlett and Daphne have returned home early (wait, didn’t she have an MTV thing?) in order to count down to the new year with him. Aww. 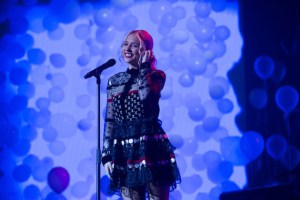 MADS’ NEW SUITOR? | Before she gets home, however, Maddie is busy catching the eye of Justin Bieber-esque pop star Jonah Ford in California. He’s got an entourage, which Mads thinks is cute. Scarlett’s take on it? “Ehh,” which marks the first and only time Scarlett and I have been in agreement on something. Jonah claims Maddie is one of his favorite artists, and he makes sure to get her number so she can swing by the studio and see him the next day. But when she shows, he’s not there, and a savvy Maddie smartly turns down his text invitation to hang out the next day.

Still, when he comes to her hotel with flowers, she’s charmed. So she agrees to have dinner with him, then accepts a flight back to Nashville on his private jet. 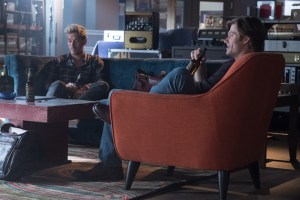 BLONDES HAVE LESS FUN | Gunnar has completely lost his onstage mojo, as well as most of the pigment in his hair, thanks to his breakup with Scarlett and some liberally applied peroxide, respectively. Will, meanwhile, has no trouble firing up a crowd and having a good time, so he appoints himself Gunnar’s guru as he preps for a New Year’s Eve show. But then Will sees Zach with his new boyfriend, “perfect Mark,” and gets all teary as he moans, “I’m not even sure I’m the guy you should be talking to about confidence.” Oh no, GUNNAR HAS INFECTED HIM. But it all plays out OK. Even though Gunnar totally seizes on stage at New Year’s, Will jumps up to sing harmony and all is well in the world. Sadly, though, they do not reenact their Season 1 smooch as the clock strikes 12.

RETURN TO FORM… AGAIN | And that leaves us with the episode’s most troubling storyline: Juliette’s testing the waters of what seems like a giant cult. After she blows up at people trying to help her plan a New Year’s Eve party, Avery and Glenn attribute the stress to getting her new tour launched. But at the first date, right there in Nashville, she shocks everyone by stopping the music midway through the first song.

See, Juliette noticed unflattering signs in the audience — “Backstabber,” “Song Thief!” and “You’re No Rayna,” are a few — and decided to end everything just after it had gotten started. When someone in the pin-drop quiet auditorium yells, “You’re a fake!,” she shoots back, “You have no idea how real I am.” Then she launches into a tirade about how she’s tired of asking people for their love, and ends with “I think I just need to stop.” The crowd chants her name, and Deacon, Avery and Glenn look horrified in the wings, but Ju can’t be persuaded to change her mind. “I’m sorry,” she says, and walks off stage. (Side note: Way to pay back Deacon’s forgiveness, lady.)

Avery is concerned, and he whisks Juliette off to Asheville, N.C., for a little getaway. When she can’t sleep, she winds up in the hotel lobby at 2 a.m., and that’s where she meets a man in a sports coat who says he recognized her earlier in the day. She is sarcastic. He drops annoying, fortune-cookie-type wisdom (sample: “Complications are just excuses to avoid the truth”) and says for the first time of many during the episode that he believes one must give up control to get control. She’s like, “Whatever.” He bids her good night.

FREE STRESS TEST | Turns out, the guy’s name is Darius, and he’s the leader of something called The Movement for Coherent Philosophy, which puts forth the idea that everyone is an addict to something because they’re too afraid to access their secret pain and that’s great and all but CAN SOMEONE PLEASE GET LEAH REMINI ON THE PHONE PRONTO? Juliette is slowly getting more and more intrigued by the movement’s tenets, and pretty soon she’s visiting Darius’ headquarters.

As she’s ushered into his office, some of the shots legit look like outtakes from Going Clear. And though she puts up a good, skeptical front, all it takes to reduce her to a vulnerable, crying mess is Darius asking her if she’s a good mother. He teaches her a technique to help her access her “authenticity,” and she uses it at a confrontational radio interview the next day, surprising the host (and, once more, Avery and Glenn) when she calmly says, “I struggle with depression and it’s been really bad lately. There might be a lot of listeners out there who understand what that feels like. And I’m trying to get it under control, and I’m going to put my tour on hold until that happens.”

At the end of the hour, Avery and Ju ring in the new year at home with Cadence. But when he leaves the room to put their daughter to bed, Juliette calls Darius and says, “I’m ready.”

Now it’s your turn. What did you think of the premiere? Hit the comments, y’all!