The record label Rayna Jaymes worked so hard to build may be in shambles, and if it does survive, it’ll do so without one of its marquee players. Still, Nashville showrunner Marshall Herskovitz says, we should consider the Season 5 finale a win… for Juliette, if no one else. 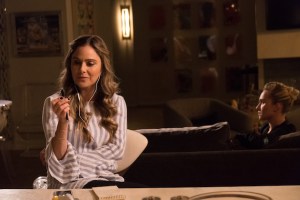 Even though Ms. Barnes spends the end of the hour wondering if she’s irrevocably messed-up, “She also does this remarkable thing to redeem herself,” the EP tells TVLine. He’s referring to Juliette’s pulling herself out of the running for an American Music Award and outing herself — via morally questionable journalist Mackenzie Rhodes — as having stolen Maddie’s song, while simultaneously using the power of the press to shame Zach into (probably) sticking with Highway 65.

“If you look at her across the season, she survives a plane crash. She heals herself. She finds God. She has failure in her career. She goes through so many difficult things in this year and finds the strength in the end not just to do the right thing but at great, great cost to her career,” Herskovitz adds. “To me, it shows growth in her character, no matter how miserable she might feel about it. She manages to do something really selfless at that moment. That’s what I love about her.”

In a moment, we’ll hear more of Herskovitz’s thoughts on the season-ender. But first, here’s a quick rundown of the crucial highlights:

* Zach plays hardball by emptying Highway 65’s bank accounts and turning off its electricity, forcing the company to set up a makeshift office at the studio. Kacey Musgraves comes by to hang out. It would seem like a party, except for Deacon’s fuming all over the place. When he finally figures out what’s going on in Zach’s head, he gently confronts the tech whiz, whom he’s realized hasn’t left “because you love it here and you don’t want it to end.” Deacon pitches a true partnership, where they make decisions together, but it’s unclear what the label’s future will be.

* When Deacon finds out what went down between Juliette and Maddie, he angrily informs Juliette that she’s no longer a Highway 65 artist. Maddie later loses the AMA to Katy Perry, but happily tells her dad that she feels “free.”

* Scarlett and Gunnar break up again. I did not think that was possible after they’d already broken up three times in the past two episodes, but maybe this one will stick?

* Upon learning about what Juliette did to make things right with Maddie, Avery drives home to Nashville in a terrible storm to hug his woman. She says she loves him, and it’s clear they missed each other a lot.

* Will and Zach break up.

* Alyssa kisses Deacon outside The Bluebird, shocking him. She later explains that she felt like he “needed” it. (Hear what star Charles Esten had to say about that scene here.)

* Deacon and Jessie hug at one point, and it seems like they both acknowledge for a moment that there might be something brewing between them. Daphne is still wary of the new woman in her father’s life, but she seems to be becoming friends with Jessie and Brad’s son, Jake.

Read on for Herskovitz’s answers to a few of our burning questions from “Reasons to Quit.”

TVLINE | Deacon and Jessie have a lovely friendship building in the back half of this season. Were you tempted to speed it up or slow it down even more?
I would say there was more conversation and even disagreement about the speed and nature of that relationship than anything we dealt with all year. And that was not just among the writers, but among the actors, as well. The idea of Deacon moving on was so triggering to so many people. Should he? If he did, what would it look like? How long would it take? That sort of thing. Frankly, we were never clear, in our own minds, what this relationship was. It’s not like we had a master plan.

I have to say this is closer to the kind of work that Ed [Zwick, co-showrunner] and I have done in all our other series that in some way, over time, was improvisational… in the sense of, well, what’s going to happen between these people? We don’t know. Let’s see what it feels like. We felt that [series creator] Callie Khouri summed it up the best one day when she said, “These are two people both of whom are carrying around such pain themselves that there’s just no way for them to be in a relationship right now.” Once she said that, it clarified for us what we were doing. And then there’s what happens when you cast the right person and what happens between two people. [Charles] Esten and Kaitlin Doubleday just knew how to play off each other. It was just some fortuitous workings out of circumstance that helped that relationship grow.

TVLINE | Is there a chance Highway 65 will survive into the next season?
Yes. There is a chance that Highway 65 will survive but they’re still facing the same kind of real difficulties record labels face these days. Like Zach says, this is not a charity. It still needs to somehow figure out how to make money. So put it this way: They survived this season. Whether they make it to next season is still an open question.

TVLINE | Are Juliette and Avery married? Divorced? What’s their status right now?
[Laughs] They are actually divorced and not yet remarried. They have decided to start wearing their rings again, which, by the way, perturbed many fans. Like, “Wait a minute, did we miss something?” This is something that the actors felt they wanted to do and I said fine. I didn’t realize it would cause a Twitter firestorm. But they are technically no longer married, even though obviously still very close and in love and very deeply connected to each other.