Nashville‘s resident blonde (at least while Juliette’s out of town) does his thing in this week’s episode — and by “his thing,” I mean “sleeps with a woman with whom he is professionally involved,” even though that arrangement didn’t work out for him with Scarlett… or Erin… or Hailey… or Zoey… or Autumn. Dude, the list goes on an it is embarrassing how inadequate you are at keeping it in your pants when a pretty woman with sweet pipes makes eyes at you.

Also? Daphne hates Jessie. Yeah, you knew that, but she like really hates her this week. And Scarlett falls back into her old patterns, as well.

Read on for the highlights of “Beneath Still Waters.” 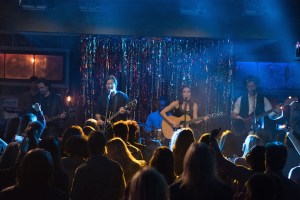 ALANNAH’S A HIT | The newest member of Will, Avery and Gunnar’s band is a gigantic hit on Twitter after their first show together, so Gunnar suggests making her a bigger part of the group. Will is cranky about it, but that’s probably more because he can’t find his “vitamins” (read: ‘ROIDS) than anything else. Anyway, Gunny goes to Alannah’s house to hear more of her music, and she plays him a gorgeous ballad she wrote about how you need to let things go before you break them “or before they break you,” she says. He manages to control himself long enough to bid her goodnight and leave, but when he gets to his car, he tells himself, “Don’t be an idiot.” Then he turns around… and is an idiot. When he knocks on Alannah’s door once more, she knows exactly why he’s there. I do kind of love that she’s the more aggressive of the pair, and that he’s all, “I’m not ready for a relationship” and she’s all, “Who said I was?”

The next morning, they wake up next to each other and she promises that it can stay a casual, fun thing. “Don’t worry. No one has to know,” she says, rolling back on top of him for a little wakey wakey eggs and hey-now. But all it takes is one moment of weirdness at rehearsal and the guys totally know what’s going on. (You guys know how I write in all caps sometimes? I assure you that they’re used here to accurately represent exactly what Gunny sounds like in the scene.) “You two look kinda sexy together,” Avery notes when Alannah starts rubbing up on Will while they’re singing. “ALMOST TOO SEXY,” Gunnar says in what I’m sure he thinks is a totally suave way. “It’s a joke! EVEN I WANT TO MAKE OUT WITH WILL RIGHT NOW.” (Side note: Stop teasing me, Nashville.)

The moment Alannah steps outside, Avery looks at Gunnar and says, “What were you thinking?!” (Ha.) “Band 101: Don’t sleep with bandmates!” There’s more ribbing, and it’s warranted. Then the band plays that night and they’re amazing, and even Gunnar is able to keep himself in check. (Perhaps by concentrating on his sweet porkpie hat.) After the show, Brad Maitland lumbers up to Alannah and gives her his card, telling her to distance herself from the boys. What if they’re my friends? she asks. “I’m the only boy you will ever need, all right?” he sleazes. Oh, so Brad is the new Jeff Fordham? Well smirk my turtle and call me daisy! At the end of the evening, Alannah goes home alone, leaving Gunnar to stare after her with his Gunny, googly eyes. 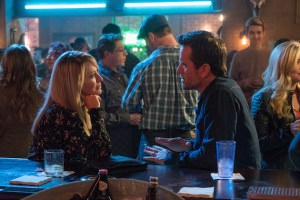 MAKING INROADS | Daphne hates Jessie, and Jessie is fully aware. But Deacon is irked by his younger daughter’s stinkface attitude toward his new lady, so he sets up a dinner for the three of them and Jake, so they can hash everything out. It goes poorly. Thank goodness Jessie puts on her big-girl pants and gets some time alone with Daphne, confessing that she’s afraid she’ll mess everything up for the people she cares about so much. “You need to know that I am not trying to replace your mother, OK? I couldn’t. I wouldn’t. And I’m not trying to take your father from you, either.” Daphne cries and apologizes. Jessie cries and smiles. They hold hands and all is well.

MEANWHILE… | Can we get some webisodes about Juliette’s adventures with Culty McWorrisome in Bolivia? Anyone? 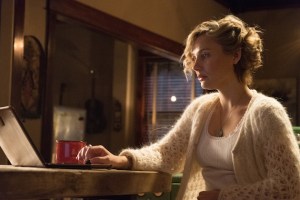 HORSE SENSE | Scarlett’s need to gather all the wounded puppies of the world to her side manifests as she fixates on Sean, a military vet at the ranch who’s got PTSD and is on the verge of losing his wife and baby daughter. When she sees him drunk and rambling around downtown Nashville, she follows him and starts talking about how she knows music is important to him. How does she know? Well, she’s been Google-stalking him.

She invites him to stay at her house, because that’s a totally sensible thing to do to a stranger struggling with his mental health. When he sobers a bit, he realizes that she was talking about him like she knows him — and when she confesses to the online research, particularly a video of him playing guitar with a friend at his high school graduation, things go bad quickly. See, the friend died while the two of them were serving abroad in the military. “I watched his jaw get shot off. So anytime you wanna rub my face in it, just keep going on about music,” he says, angry and agitated.

Before Scarlett retires to her room, she asks him one question: “I’m just wondering: Who does it help if you give up what you love?” And that seems a little ballsy a query for a suffering veteran whom you barely know, Scarlett, but maybe that’s just me.

But because Scarlett is an angel in a grandma cardigan, her prodding works: The next day at the ranch, Sean picks up a guitar and starts singing. Just a little bit, and just to himself, but it’s a start.