Deacon, you were so close.

But buttons are barely unbuttoned and chests are barely heaving before Deke starts having some capital-F Feelings about the whole thing, and before you know it, he’s sobbing on Jessie’s floor. It’s sad. It’s touching. It’s not wholly unexpected. But is it the end for a relationship that’s just getting started?

Read on for the highlights of “Where the Night Goes.” 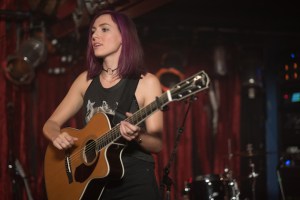 THE BOY BAND GETS A GIRL | “OK guys, I’ve got a question,” Gunnar asks Will and Avery, “Why is it always me singing the high, girly part?” Oh Gunny, I have so many answers to that. When the guys respond that he’s got the voice that can do it, he counters tha the wants to hire a pretty girl to croon along with them. Bucky agrees that some of the hottest acts in country right now — Little Big Town, Alabama Shakes — are co-ed. And so the guys go about adding a little estrogen to the WAG Band’s sausage party.

For some reason, they decide to go out and try to find someone by attending a bunch of shows. (Isn’t narrowing the pool exactly the kind of thing Bucky would do for them?) They all seem enamored of Alannah, who’s got pink and purple hair and a rad voice. And after Gunnar sniffs out that she’s single, he’s her biggest champion. Will and Avery like her, too, and it becomes official when she debuts with them at a gig that night: Alannah is part of the band. I think she blends well with them, but I’m too distracted by Gunnar making googly eyes at her while they’re all up on stage. Maybe try dating someone — and I’m just spitballing here — who’s not in/affiliated with your band, bro? See how that works out for once? 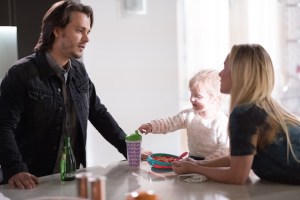 THE BOLIVIAN EXIT | At home, Avery is still bowled over by the news of Juliette’s recovered rape memory. And he’s trying to be as supportive as possible. But when Darius suggests that she needs to serve others in order to kickstart her new life… and that the best way to do that is via a two-week, Movement for Coherent Philosophy service trip to Bolivia… Avery is incensed.

“I don’t trust this guy. Why are you letting him control your whole life like this?” he wonders, but Ju maintains that she’s not. Later, when she presses him for an answer, he blurts out, “Do you even need us anymore, except to save you from yourself?” But she’s growing more sure of herself by the minute. “I do not need you to save me,” she replies. “I am saved.”

The next night, when Juliette wakes up alone, she finds Avery sleeping on the couch. She cozies up to him and apologizes. “I’m sorry I’m not a normal person. You deserve a normal person in your life,” she whispers. “It’s OK,” he answers softly. “I’m used to it. Sort of.” She tells him she needs him “more than anyone in this world” and they have sex. But when he wakes up in the morning, she’s gone and she’s not answering her phone. Bolivia? Avery’s face looks like “Aw hell NO-livia,” amirite? (I’ll show myself out.) 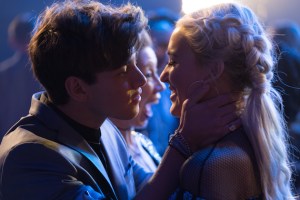 THE REAL JONAH FORD | Jonah’s “crazy” (according to him) ex writes a song ragging on Maddie. Jonah tries to apologize in person, but the paparazzi get in the way. (Side note: I’ll spare you all my usual rant about how I’ve been led to believe this thing is really out of character for that town, but suffice to say, I’m still irked by the show’s inconsistent invocation of invasive tabloid media.) Finally, he shows up at the house and begs her to see that a) he truly is no longer dating his ex and b) he’s just a ball of anxiety who thinks that his own music is “crap.” Then he asks her to accompany him to an EP rollout party. She says yes.

They’re at the event for a very brief time — cute braids, Mads! — before he tells her they’re leaving. Oh, and he kisses her in front of everyone. They wind up buying lots of yummy donuts and staying out all night. At one point, I start to think the show is going to go full Ariana Grande and have Jonah lick a donut, but it doesn’t happen. Eh, probably for the better.

LET’S GET IT ON | That leaves us with Deacon, who is necking in the car with Jessie when things get a little hotter than they’ve previously gotten. They make a quick plan to go to her place… but then they realize they don’t have condoms, and in the discussion about whether or not to pick some up on the way, their nether regions cool considerably. (Side note: Oh just GO TO A DRUGSTORE. In terms of impediments to sex, this is a rather small one, no? Teddy was literally in danger of losing his job and his liberty, and he was still banging Ol’ Leopard Panties on the regular. Deacon, BE BETTER THAN TEDDY.) (Side note to my side note: Deacon later does to go a drug store.)

Anyway, there’s a lot of back and forth during the hour about where and when Jessie will finally get her hands on Deke’s six-string, if you know what I mean. They finally wind up at her place, on her couch, and they’re sweetly nervous around each other… until they start kissing. Then she’s on his lap, and then they’re horizontal, and it is ON. Deacon starts working his way down her neck and, oh wait, it’s actually OFF. Because he’s crying. And it’s not “One Manly Tear Sliding Down My Face as I Briefly Think About My Dearly Departed Wife.” It’s more “Sobbing So Ugly I Feel the Need to Hide My Face With My Hand and Slither Off the Couch in Horrified Embarrassment Combined With Nasty Breath Hitches.” Or, shorter: Nice work, Esten.

For her part, Jessie is very understanding and comforting. “If you need to talk about Rayna, it’s fine. It’s OK,” she says, petting him like he’s a Chihuaua who just heard thunder. He starts apologizing (“I thought I could… I wanted to”) but she shushes him. “It’s been 11 months,” he notes, adding that he’s had some sort of breakdown every single day and wondering why he can’t seem to get past things, because it feels like Maddie and Daphne are doing OK with their grief. Jessie just hugs him as he tries to remember how to breathe.

DEKE’S WALK OF SHAME | Once Deacon composes himself, they share some ice cream and stay up talking. Their last conversation before Jessie falls asleep with her head in his lap (NOT LIKE THAT) is about how they should sleep under the stars by a river sometime. Of course, this makes him think about Rayna, because everything makes him think about Rayna. And he sadly whispers that he’s sorry that he’s broken, but Jessie doesn’t hear him, because she’s conked out.

In the morning, they’re weird around each other. And Jessie is a little less Earth Mother than she was a few hours earlier. “You don’t have to say anything. I know that Rayna is a hell of an act to follow,” she says, misreading his awkwardness as he prepares to leave. “Just so you know, I know that I’m not her… She was larger than life, and I can’t compete with that.” But he stops her before she can say anything more. “I was gonna say, please don’t give up on me,” he says softly. And she’s relieved.

Deke and Maddie both arrive home in the very early morning to find that Daphne’s sleepover at a friend’s house ended when the girl got food poisoning. So Daph’s been home alone all night. Oops!

Now it’s your turn. Got thoughts on the episode? Hit the comments!