This week’s Nashville offered up a huge chunk of information about Juliette’s past, and boy, is it a timely doozy.

Just a day after former Team USA Gymnastics doctor Larry Nassar was sentenced to up to 175 years in prison for sexually abusing more than 150 girls and women in his care, the CMT drama aired an episode in which Hayden Pannettiere’s character, Juliette, remembered that a man Juliette knew as “Uncle” paid her mother to engage in sexual activities with her as a child.

“I think this is something really important for people to be able to talk about,” co-showrunner Marshall Herskovitz told TVLine when we discussed the episode Wednesday after we’d viewed a screener of the episode. “My god, the bizarre coincidence that we’re talking on the day when this monster was sentenced is sort of remarkable.”

In the Nashville episode, titled “That’s My Story,” Darius decides Juliette has reached the point in her Movement for Coherent Philosophy journey called “witnessing”: She reclines in a dark room full of candles and other movement members while Darius coaches her to delve deeper into a troubling, vague memory about an older man who knew her mother. As Juliette’s memory crystallizes, she remembers that she — and not Jolene — was in the bedroom with the lecherous old man while her mother cried and pocketed a stack of bills in the living room. The realization of what actually happened causes Juliette to sob.

Read on as Herskovitz explains why the country-music drama chose to tackle the subject at this point in the season, and what the discovery might mean for Juliette and Avery as they move forward.

TVLINE | This is relatively early in the season to have such a large revelation happen.
Yes.

TVLINE | What was the thinking behind revealing Juliette’s abuse now, as opposed to later?
Because it actually opens the door to a lot of story that’s going to follow. It’s been very interesting to watch the reactions of the audience on Twitter to this guy Darius and to this movement she’s getting into and they’re saying “Oh no, don’t get involved in a cult!” What’s interesting to me is that, regardless of where this is going to go, there’s a lot that this man teaches that’s absolutely correct and very helpful to her. So it’s not a simple situation at all. What [happens] in this episode, the revelation of what was done to her, is life-changing to her. And he facilitates that. So there’s an interesting combination of dark and light here. 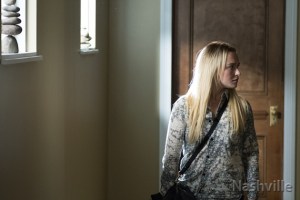 TVLINE | We’ve talked before about how the things Darius says are not wrong, but the whole atmosphere of the movement is a little creepy.
[Laughs]

TVLINE | I’m wondering if the fact that Juliette is making such gains in such a controversial environment — how might that play with her family and friends?
I’m always constrained, because I don’t want to talk about future story, and that’s the problem. But we were always really interested in the idea that this man and his movement really helps her but at the same time, there’s just something that raises the hairs on the back of your neck, like there’s something wrong here. How do you do that, how do you accomplish that, and how do you walk that fine line? Obviously, Avery has been suspicious from Day 1 about this guy. I don’t think I’m giving away much to say that his reaction to this revelation is complicated by the fact that he’s suspicious of this guy. In other words, he understands the huge significance of what Juliette has discovered, and he feels awful for her. But at the same time, he still has suspicions about the group.

TVLINE | This is a very big storyline and it’s arriving in one that has had rather small ones. Why this bombshell, when the show has trafficked lately in quieter, smaller moments?
Well actually, I think there are going to be some very big stories this year. Speaking a little inside baseball here for a second, every year, you hear the complaints about the first two or three episodes of Game of Thrones. What’s happening? Nothing’s happening! And then all of a sudden, it begins to accumulate, and then so much happens. When you’re doing a serialized story with many characters, you have to lay a lot of pipe in the beginning of the season. And we’ve been doing that, and I don’t want the audience to get the impression that this is going to be a nice, quiet season where everyone just sits in rooms and talks. There’s going to be lots that happens. This is the first big bombshell, but there’s a lot more coming.

TVLINE | What was Hayden’s reaction when you first pitched her the storyline?
Oh, she’s so game. [Laughs] Hayden is such a remarkable performer. We keep talking about this — she should be a director, because she understands what the camera needs to see. Most actors experience the scene through their own emotions and what they’re experiencing in the scene. Hayden has the ability to do that and at at the same time understand what the camera needs to see or what the audience needs to feel. And that does not, in any way, undermine the authenticity of what she’s doing. I find that remarkable, and it’s extremely rare. Actors like that usually become directors, because they’re actually filmmakers…

I think she got the importance of [the abuse storyline]. She got that this is something that can potentially help people understand a trauma that plays a huge role in so many people’s lives, and we’re just beginning to understand that as a society. And I think she understands that and feels good about telling that story.