At the end of this week’s Westworld:

Mystery of the dead tiger? Solved!

Mystery of the woman with the leather journal… and the third park… and the actual whereabouts of the file Charlotte wanted Peter to smuggle out of the park? Added to the towering, mystifying pile of “Huh?”!

The HBO drama lets gives us some hints about two of Westworld’s neighboring lands — and even takes us inside one — in Episode 3, “Virtú e Fortuna.” Let’s hit the highlights, shall we?

A NEW PARK! | The hour opens in what looks like colonial India, but it’s quickly apparent that we’re actually in one of the other parks. A sitar cover of The White Stripes’ “Seven Nation Army” plays in the background as a blond man (hi, Sleepy Hollow‘s Neil Jackson!) notices a brunette woman (hi, The Leftovers‘ Katja Herbers!) from a distance. He crosses an ornate yard to where she’s sitting at a table, her leather-bound journal in front of her.

As he puts the moves on her, they establish that they’re both there to hunt Bengal tigers. “Edge of the park. A bit mad, a bit dangerous,” he notes, and she seems only mildly receptive to his charms. But then they’re inside, kissing and undressing. “You certainly look like one of the park’s offerings,” she notes, taking in his 24-pack abs. “I promise you, I’m quite real,” he says. But she wants him to prove it… but letting her shoot him with one of the park’s guns.

“If you are you who say you are, this will only sting a bit. And if you’re not, you won’t remember anyway,” she reasons. He’s in the middle of trying to curtail her violent train of thought when she pulls the trigger. He goes down, but only for a moment: It appears he’s as human as he promised. “Congratulations,” she says as she climbs on top of him. “Now, where we were?”

HERE, KITTY, KITTY | They both don old-timey adventure gear and ride out into the wilderness with some guides. She’s got a map sketched in her notebook — is it me, or does the map look like the area of the park William showed Dolores at the end of the previous episode? When their party arrives at camp, the woman notices that it’s very quiet and senses that something is wrong. Then she sees that some other park guests who’d arrived earlier are dead in their tent. That’s when their previously hospitable guide points a weapon at them and mutters, “These violent delights have violent ends,” then shoots the blonde man.

The woman manages to take down the murderous host and then escapes into the wild, completely freaked out. When she pauses to catch her breath, she notices a tiger watching her. As it charges, she shoots and then runs, winding up in a part of the park that a robotic voice informs her is outside of the “guest experience area.” The tiger doesn’t seem to care about those boundaries, either. It stalks her to the edge of a giant cliff overlooking some water, then leaps at her, taking them both over the side.

IN SEARCH OF THE HOST WITH THE MOST | The group that was on the beach in the season premiere (Stubbs, Bernard, Karl, etc.) follow the train tracks back to Westworld’s command center. Charlotte is there, but no one has been able to locate Peter Abernathy. The mention of the host’s name causes Bernard to flash back to when he and Charlotte were searching for him right after the host uprising. (Clarification note: For Bernard, as far as I can tell, the rest of the episode unfolds within that flashback.)

Bernard and Charlotte find Peter tied up with a group of humans taken prisoner after the Delos party. But before they can grab him, he’s snatched by a bunch of Confederados. 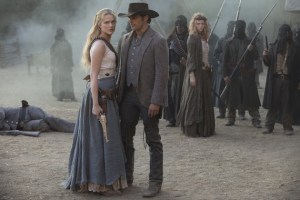 BATTLE LINES DRAWN | Elsewhere, Dolores meets Braddock’s colonel — “Call me Wyatt,” she says (though I’m going to keep referring to her as Dolores, cool?) who is disinclined to let a woman lead him or his men. He scoffs… until she summons her soldiers, who suddenly melt out of the nearby trees like those snakes chasing the iguana in Planet Earth II. A dead-eyed Clementine drags out the tech we previously saw being burned in that white goo, then Angela lets him go — only for Dolores to prove her point about the weapons that the park’s incoming security forces will use on the hosts. Convinced, the quickly colonel allies with her. “Welcome to Fort Forlorn Hope,” he says.

Soon after, the Confederados arrive with Peter in tow. He’s not doing well, and Dolores — who’s very upset to see him in such a state — has him brought to the infirmary. Bernard also happens to be among the prisoners, but he gets far less preferential treatment: “Toss him into jail with the rest,” she says. She’s saddened to learn that Teddy doesn’t remember Peter at all. “He’s my father. My home,” she says. “Look what they’ve done to him. You’re all I have left now, Teddy.” He hugs her. (Side note: I genuinely love how Teddy has been relegated to the part typically played by a female character in this situation — offer comfort, ask questions to help with exposition, look pretty.)

PAPA CAN YOU HEAR ME? | When Dolores visits her father’s bedside, he remembers her, lapsing back into his loop and talking about the ranch and their cattle. She’s undone, crying as she muses about how she pulled a trigger and started a war. But then Peter gets glitchy (again, kudos to Louis Herthum for his ability to change this character around on a dime) and agitated as he mumbles about getting to the train.

Dolores asks Bernard to fix her dad. He, in turn, asks what her endgame is. “To dominate this world,” she replies, which makes him shake his head: Westworld is “just a speck of dust” in the grand scheme of things, he says. But then she points out that he’s never been outside of the park. “I have,” she continues. “And the world out there is marked by survival, by a kind that refuses to die. And here we are, a kind that will never know death, and yet we’re fighting to live. There is beauty in what we are. Shouldn’t we, too, try to survive?” (Side note: That line about humans refusing to die, as well as a lot of what we learned in Episode 2, sure seems like humanity either has achieved or is real close to achieving immortality at this point in the story, no?)

Bernard “hardports” into Peter and learns that he was outfitted with a thin character masking a huge, encrypted file. “Whatever’s in there, they want to get it out of there. As long as he’s with you, they’ll be following you,” he warns Dolores. She is resolute, responding, “Then let them come.” 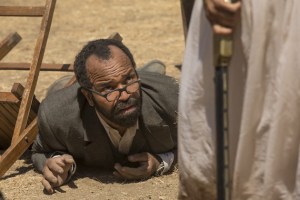 And they do. Park security teams, with Charlotte riding shotgun, descend upon the fort. Dolores’ soldiers and the Confederados fire upon them, and pretty soon, there’s a big ol’ battle going down outside the fort. Two of the park employees manage to get inside; Bernard manages to decrypt Peter’s file (and download it into himself, perhaps?) before the security guys come in and carry Peter away.

It should be noted at this point that Bernard is not doing very well, himself; the shaking hand is back, and it seems to be spreading to the rest of his body. And when he tries to scurry away to safety during the melee, Clementine brains him with a musket and drags him away by one arm.

Unbeknownst to Craddock and his superior officer, Dolores gives a signal that brings all of her people into the fort. They then bar the door, so when the security forces are getting the better of them and they try to retreat, the Confederados have no cover. Craddock, who is one of the few Confederados safe inside, calls Dolores a “traitorous bitch.” She takes his gun and hands it to Teddy. “Truth is,” she says calmly, “we don’t all deserve to make it.” Then she orders Teddy to kill Craddock and the rest of his men.

Thing is, Teddy doesn’t want to. So he secretly lets them go… and a disappointed Dolores sees all.

ARMISTICE RETURNS! | Maeve and Hector refuse to go underground, even though Lee is adamant that the park’s security forces will destroy them as they go sector to sector. But then some Ghost Nation hosts appear, scaring Maeve enough that she, Hector and Lee scramble for safety. They make it back into the behind-the-scenes part of the park, thanks to one of those big elevators that just happened to be left up (this isn’t the one Charlotte and Bernard used, right?)

As they wander the maze of tunnels below the park, Lee can’t get over the fact that Maeve and Hector appear to be in love, even though their characters were programmed to be alone eternally. “I guess we shouldn’t have f—ked, then,” she shoots back. (I. Love. Maeve.) When Lee brings up Isabella, the fictional love of Hector’s fictional life, the black hat starts to talk about how Isabella was “words in his head” but his affection for Maeve is “true.” Still, as he goes on, Lee starts reciting along with him: Hector is merely using script Lee penned, proving that the host isn’t quite as freethinking as he thinks he is. Maeve then figures out that Lee created Hector as the ideal version of himself, and the whole scene is rather nicely done by all.

When a Delos employee runs, burning, down the hall, the group is temporarily taken aback. Then they see that Armistice is behind him, sporting a new robotic arm and toting a flamethrower. “She has a dragon,” Hector notes, a little in awe. They follow her to where she has Felix and Sylvester tied up, then they all head above ground.

Meanwhile, the brunette woman attacked by the tiger claws her way onto the banks of Westworld, right near the corpse of her feline assailant. She’s coughing and sputtering, and then she looks up: A member of the Ghost Nation tribe is standing in front of her, holding what seems like a very sharp spike in his hand.

CHILLY RECEPTION | Eventually, Maeve’s group winds up somewhere cold and snowy. Lee explains that they’re near the Klondike narrative, a few sectors away from Maeve’s homestead (and, hopefully, her daughter). They notice a campfire and approach carefully; Lee scrapes some snow off a heap nearby and winds up unearthing a helmet that looks like it’s straight out of feudal Japan… and the severed head still wearing it. He runs to the group, exhorting them to leave, but Maeve tells him to hush. And that’s when another man, brandishing what seems like a samurai sword, runs at her, yelling ominously. Cut to black!

Ready for the next episode? Read the Westworld Season 2, Episode 4 recap here!