If you’ve got any leftover Delos Dollars* from your last Westworld vacation, better spend those puppies in the online store or something — based on this week’s episode, it’s not long before the entire place is in ashes.

During the hour, two characters — who seem to be working with opposing agendas — both promise to lay waste to the animatronic park(s). Could it be that they’ll join forces by the end of the season?

Read on for the highlights of “Reunion.”

*No, these don’t actually exist, as far as I know, in the Westworld universe. You get the gist. Just go with it. 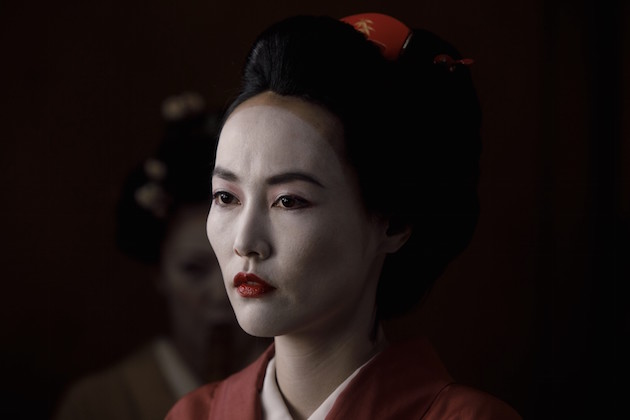 HOME VISIT | The episode starts a long time ago, when Ford and Arnold are prepping to present their concept to a potential financer at a hotel somewhere in Asia. Arnold and Dolores spend some time on the balcony of one of the rooms, and she’s transfixed by the city’s skyline at night. “Have you ever seen anything so full of splendor?” she asks, and Arnold says that it’s better seeing it through her eyes, because when you’re used to it, “after a while, it doesn’t look like anything at all.” She’s wearing black cocktail dress and her hair is pulled back into a sleek bun, but she’s 100 percent rancher’s daughter persona here. When Ford comes to get them, Arnold informs him that “the improvisations I added to her behavior aren’t quite dialed in yet” and advises him to go with another girl. “As you wish,” Ford says begrudgingly. “You have to let go at some point.” 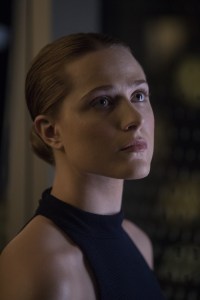 Arnold shakes it off and takes Dolores to visit the nearby site where he’s building a large new home for his wife and son. “I need to have my two worlds at least within reach of one another,” he says. He gets all wrapped up in how she and his kid, Charlie, see so much beauty and possibility in the world. But then she utters the “have you ever seen anything so full of splendor?” line again, and his musing ends with the cold truth: He’s just talking to a robot. She asks to come back some time. He promises he’ll bring her.

THE ULTIMATE SALES PITCH | The episode includes a whole bunch of flashbacks, so let’s run through them now. While Arnold and Dolores are hanging out in his half-built house, Logan and William enjoy a nightcap in the hotel bar. But William begs off, citing jetlag, leaving Logan alone to meet with two representatives from something known as the Argo Initiative. They’re a man and a woman; we recognize the woman as the host Angela. They’re there to pitch Logan their super-secretive project; it follows that Dolores would’ve served the same purpose that Angela does here, if Ford had had his way.

Logan is dismissive, but they get him to accompany them to a private demonstration of something “a little more tangible” than the typical artificial intelligence or virtual reality technology. As Logan circulates through a party, where everyone is in modern dress and Clementine is playing the piano, he’s to try to identify who’s the android. He singles out Angela… but then is dumbfounded when she chuckles and, with a small hand motion, freezes the entire scene. Yep — everyone there, aside from Logan, is a host. (And you can see Tucker’s character in the mix, too.) Logan is amazed. “Welcome to Westworld,” she says. And because Logan is Logan, it’s not long before he’s dragged Angela and at least two other hosts back to his room for naked shenanigans.

Logan is successful in convincing his father to invest in the park, but when we see the old man touring the site a while later — with William and a bunch of other suits in tow — Daddy Delos is angry that the park is losing money and likely won’t make it past the next few years. William at this point has already had his interlude with Delores; he’s well on his way to Man in Black-hood. He posits that the park isn’t the thing; it’s the behavior of the guests that’s the real potential moneymaker. After all: If Delos can collect information on how people act when they think no one is watching, won’t they have the best, least filtered market research available? Logan’s father is impressed with his (future?) son-in-law’s ruthlessness.

WILLIAM HAS ISSUES | Later, at Daddy Delos’ retirement party, Dolores is among the hosts trucked in as entertainment. She plays the piano, and a little girl tells her how pretty she is; we then see that the girl is William’s daughter, who’s there with her mom and dad. William is slightly taken aback to see Dolores there, but he gets past it.

During the evening, Dolores wanders out onto the terrace and once again marvels at the cityscape before her. “Have you ever seen anything so full of splendor?” she wonders. But Logan, who’s shooting up some kind of drug on a lounge chair, doesn’t share her whimsy. He makes some cryptic comments about how his family/the company is fiddling while the whole species burns — and how they were the ones who lit the match.

At some point later — possibly much later, given how much Jimmi Simpson seems to have taken on Ed Harris’ speaking cadence in this scene — William is backstage at Westworld HQ, addressing a nude Dolores. “You really are just a thing. I can’t believe I fell in love with you,” he spits. “You didn’t make me interested in you, you made me interested in me,” he continues. “Turns out, you’re not even a thing. You’re a reflection.” He goes on to say that he can’t wait to use her and her ilk to make everyone feel the way he did. (Side note: This scene made me feel icky. His anger. Her cluelessness, coupled with her lack of clothing. Anyone else with me?) 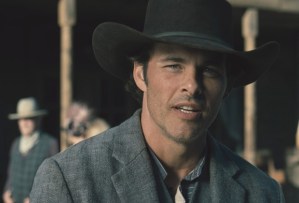 IN WHICH TEDDY IS ENLIGHTENED | In the park, a tuxedoed man somehow makes it to a remote refurbishment outpost. Based on how he informs the workers that “it’s a f–king slaughter up there!,” we’re within a few hours of Ford’s death and the start of the host uprising. He’s soon followed by Dolores, Teddy and Angela, who shoot first and wax rebellious after. “You thought you could do what you wanted to us. There was no one here to judge you. Well now, no one is here to judge what we will do to you,” Dolores calmly tells the man, who is crying. She touches a tear as it runs down his cheek. “I know exactly what is in your world. I have been there before.”

As Angela kills Weeping Tux Guy, Teddy looks around at the decommissioned hosts in various states of undress and is horrified. Dolores decides now’s the perfect time “to open your eyes,” andshe has one of the surviving techs show him his file. “Why can’t I remember this?” Teddy asks angrily as he peruses his previous “deaths.” “Why do you do this?!” he cries, nearly strangling the tech, who lamely yells back that it’s all “for fun! Just for fun!”

After a little light torture of one of the techs, Dolores learns that there are about 800 security personnel whose sole goal is to shut down the park, sector by sector. Teddy points out that they barely have 50 people on their side, and they’ll need allies. “Then we shall have them,” Dolores says, tasking a tech with waking up a decommissioned Confederado.

DOLORES ACQUIRES AN ARMY | Later, after Angela follows the Conferado’s lead and rides ahead, Teddy and Dolores cross paths with Maeve, Hector and Lee. Dolores makes a halfhearted attempt to recruit the pair to her fight, but Maeve’s all about looking for her kid and doesn’t have time for the destruction Dolores has in mind. Reluctantly, Dolores lets them pass.

Some time after, Dolores and her group enter a barn where a Confederado named Major Craddock (played by Kingdom‘s Jonathan Tucker) is eating dinner with his men. Craddock is tickled by her suggestion that they join forces; after Dolores’ gang kills him and all his men, then revives him, he’s more open to the idea. She forecasts that they’re going to Glory, aka The Valley Beyond. “An old friend was foolish enough to show me, long ago,” she says. “And it’s not a place. It’s a weapon. And I’m going to use it to destroy them.”

LOS LAZOS HERMANOS | Elsewhere, The Man in Black rescues Lawrence (remember him?) from some retribution at the hands of some disgruntled cowboys, then takes him to a bar where TMIB punches through a wall to locate a hidden first aid kid. “They wanted a place hidden from God, a place they could sin in peace,” he sermonizes as he digs a bullet from his arm and cauterizes the wound. “But we were watching them. We were tallying up all their sins, all their choices. Of course, judgment wasn’t the point. We had something else in mind entirely.” In light of Bernard’s discovery last episode that Delos has been collecting DNA info from the guests, this is a rather interesting monologue, no?

TMIB adds that he and Lawrence are going to head to a spot he knows about, and Lawrence says that to avoid a massive group of Confederados, they’re going to have to go through Pariah. So the pair heads to the City of Brotherly Lust, which now is strewn with dead bodies and presided over by… wait a minute! “Don’t you recognize him, Lawrence? In a past life, you used to be him. El Lazo, I presume?” TMIB says to the man whose armed goons suddenly surround them. (Side note: El Lazo is played by Breaking Bad alum Giancarlo Esposito, who can do quietly menacing better than just about any other actor currently working.)

El Lazo is not interested in TMIB’s mission to head west and find “treasure beyond your wildest dreams.” So TMIB grabs EL Lazo at gunpoint and tells him to order his men to follow TMIB’s commands. “This game was meant for you, William, but you must play it alone,” El Lazo responds, delivering Ford’s message for his longtime adversary. And then, as one, all of El Lazo’s henchmen turn their guns on themselves and commit suicide. “I’ll see you in the Valley Beyond, William,” the villain says a moment later, just before manipulating TMIB’s gun and offing himself.

TMIB is ticked off but determined, telling Lawrence they’ll find another way. After all, he built the place they’re going (?!), and “it’s my greatest mistake” (?!?!).

Ready for the next episode? Read the Westworld Season 2, Episode 3 recap here!