This week, Westworld takes us to Pariah, a far-flung section of the park where rules don’t exist and everyone is spoiling for a fight. Think Disney’s Pirates of the Caribbean ride, except that instead of a gift shop, there’s a couple having public sex in a stagecoach.

This anything-goes town becomes a proving ground for both Dolores and William, who finally find the impetus to define their own destinies. For her, it’s a breakthrough that, perhaps not coincidentally, comes with a body count. For him, it’s the shaking off of the limiting expectations placed on him by a seriously loathsome Logan (who, by the way, gets a little of what’s coming to him).

More importantly, Dolores and William’s newfound independence takes root at the same time that some of the series’ Big Questions come into slightly clearer focus — a welcome development as we reach the season’s halfway point.

Read on for the highlights of “Contrapasso.”

‘FIND ME’ | The episode opens with Ford drinking with the old-timey Western host in his dripping, subterranean office. After Westworld’s co-founder offers to tell his saddest story, he relates the tale of a childhood pet — a greyhound — who got off leash, chased a cat and “tore it to pieces.” Ford recalls how the dog just sat there after, befuddled, because it had achieved its purpose and “now it had no idea what to do.”

Then we cut to Dolores, who stands in a makeshift graveyard and hears a man’s voice saying, “Find me.” Then we hear her voice saying, “Show me how.” This’ll be important later, but for now, let’s focus on the fact that they’re standing on the crest of a hill, looking down over a settlement called Pariah. It’s a “city of outcasts, delinquents, thieves, whores and murderers,” Logan gleefully informs them; the El Lazo (previously referred to as Alonzo, because this show loves making us work for names) guy Slim is leading them to is rumored to be holding court down in the godforsaken town. 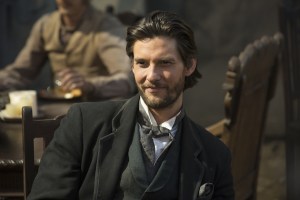 Thanks to Logan, we also learn several other things. The farther away from Sweetwater you get, the “more grandiose” the narratives become. Logan’s his family is thinking of buying the allegedly financially strapped amusement park. And a group of “Confederados,” composed of Confederate soldiers who refuse to yield to Union rule and whom now act as lawless mercenaries, are the kind of people with whom Logan thinks he wants to spend the rest of his park time.

Meanwhile, Dolores’ ennui does not go unnoticed by William; in turn, his mention of “the real world” doesn’t go unnoticed by her… although, per her programming, it’s supposed to. “Recently, it seems like the whole world is callin’ to me in a way it hasn’t before,” she says by way of explanation, moving him to grab her hand. But she breaks away when she thinks she sees herself — Black Swan-style — marching with a Day of the Dead-ish parade that’s ambling through town. Then she hears Ford’s voice and passes out.

HELLO? IS IT ME YOU’RE LOOKING FOR? | Dolores wakes up in an exam room with Ford (but without her clothes. About that: I know this show likes to keep us off-balance regarding timelines, so who knows exactly when this scene takes place, but remind me again why Dolores has to be naked here?) Basically, Ford suspects that his old partner, Arnold, has somehow been communicating with the blonde ‘bot — though she reports that the last time she talked to him was 34 years earlier, on the day he died.

“He told me I was going to help him… destroy this place,” she says in analysis mode, and Ford seems to lose a little of his chill as he gloats that Arnold didn’t succeed in destroying the park. But he comes back to himself and apologizes to Dolores for “bothering her.” After he leaves and turns out the lights, we hear Dolores’ voice: “He doesn’t know. I didn’t tell him anything.” But to whom is she speaking? Arnold? Arnold’s programming inside her? Bernard? And is it the same person she was asking to “show me how” in the beginning of the hour? It’s purposefully unclear.

PANTS FTW! | Turns out, El Lazo looks exactly like The Man in Black’s Lawrence, whom we watched die at TMIB’s hand earlier in the episode. (More on that, too, later.) And in Pariah, if nowhere else, the hosts can hurt the guests with their fists, at least. El Lazo people are looking to boost a shipment of nitroglycerin and sell it to the Confederados; when Dolores has a few flashes of memory then steps in to say she can help the crime boss get what he needs, the plan is on.

So Dolores gets some menswear for the road, and Evan Rachel Wood gets to wear something other than that blue dress for a change. She, Slim, Logan and William nab the explosive substance, but they wind up killing all of the Union soldiers transporting it in the process. Slim dies, too. Most of those deaths come at William’s hand; when one soldier is about to shoot Dolores, the white hat goes into full protective mode and removes all threat. William looks a little sick at what he’s done. Logan all but does a celebratory jig at his future brother-in-law’s shoot-first-emote-later shift.

THE MISSING UPLINK | Back at park operations, Elsie uses blackmail (she has footage of one of the host repair guys bonking a ‘bot) to gain access to the body of the woodcutter who bashed his own head in a while back. What she finds: a laser-based satellite uplink embedded in the android’s forearm. “Our friend wasn’t drawing stars. He was drawing a target,” she later tells Bernard. “Someone has been using our hosts to smuggle data out of the park.”

Funny you mention that, Elsie: Right around then, Dolores finds a fortune teller in the brothel, and one of the cards she draws featres the maze that TMIB keeps going on about. Then Dolores notices a small piece of something protruding from her skin, so she pulls at it, and it starts to unearth something that seems like it’s another uplink, but it’s so gross that I have to look away. When I look back, it turns out Dolores was imagining the whole thing — including the teller — and when she runs in horror, she inadvertently stumbles upon El Lazo people pumping the nitro into some corpses (including Slim’s) and replacing it with tequila.

At the same time, Logan and William are having it out about the fact that Logan is a complete slime. Logan argues that the notion of heroes and villains is “just a giant circle jerk” (eloquent!), then humiliates his co-worker/future family member by saying that the day he became upper middle management “was the best day of your life.” William gets a little physical with him but walks away; when Dolores finds her sorta-beau and breathlessly reports what’s happening, he wants no part of it… until she starts talking about finding a way out, and the fact that he’s integral to what the voice in her head is telling her to do. So they kiss, and both parties are pretty into it, which is a change for our park newbie, no?

There’s some drama when the Confederados realize they’ve been screwed, and William begs Dolores to run when he’s held at gunpoint, but she dispatches all of the bad guys by coolly shooting them dead. When a bewildered William asked how she knew what to do, she replies, “I imagined a story where I didn’t have to be the damsel.” Ooh, I like this Dolores 2.0!

They hop a train outta town, but it turns out the car they enter also contains Lawrence and his combustible coffins — which are stamped with the maze symbol, too. “I’m coming,” we hear Dolores say in her mind. 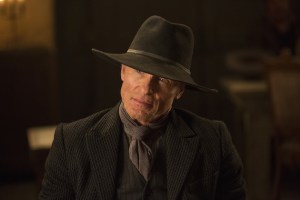 MEETING OF THE MINDS | What’s The Man in Black up to, you wonder? Well, after killing Lawrence and draining his blood in order to give a dying Teddy a little pick-me-up, the pair wind up at a saloon where Ford also is drinking. The two flesh-and-blood men don’t like each other; that much is clear. Ford mentions that TMIB’s “urgency doesn’t quite fit” the character he’s created for himself in the park. “It betrays a certain anxiety.” TMIB wonders whether the newly created Wyatt was designed to stop him from finding the center of the maze. The two trade a few more veiled threats, and Ford does that thing where he stops all the action for a while (like he did last week in the restaurant), but then Ford leaves and Teddy mentions that they need to get back on the road.

FLYING BLIND | One of the techs who was working on Maeve when she woke up during repairs has a secret: He stole a bird from the park and has been clandestinely working on programming it. By the end of the episode, he’s successful… but that seems inconsequential when he turns around and realizes that Maeve — who’s back in the fix-it bay — is sitting up and just watching him celebrate his winged win. “Hello,” she addresses him as the bird lands on her hand. “It’s time you and I had a chat.”

Ready for the next episode? Read the Westworld Season 1, Episode 6 recap here!