As it turns out, Westworld‘s Dr. Robert Ford is a real family man.

One caveat: The reclusive scientist’s “family” is a bunch of offline hosts based on his deceased relatives (and, as we guessed earlier, himself), living in a far-off sector of the park, who ignore all voice commands except for his. He calls them “ghosts,” and the eccentric designer prides himself on the fact that he added a bit of jerkiness/menace to his father-figure ‘bot (which was designed by his old partner, Arnold) in order to make him more lifelike. 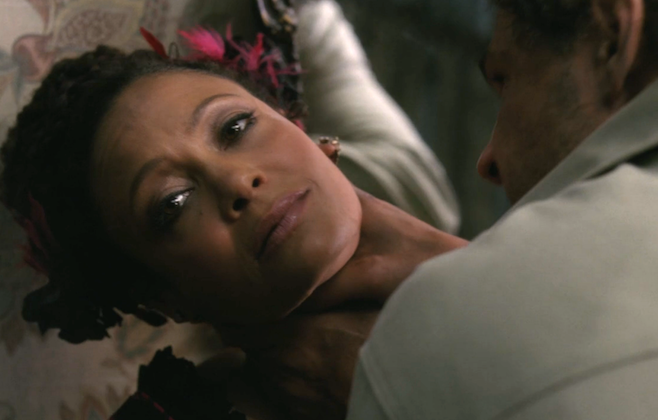 That’s only one of the WTF?! moments from this week’s episode, titled “The Adversary,” which also finds:

* Maeve getting wise (and then getting really wise)

* Theresa taking swift and definite action in several sectors of her life (she dumps Bernard, but that’s not even the half of it)

* Many characters wondering about Arnold’s presence in the contemporary park

* Lee getting into a literal pissing match with the park

Click through the photo gallery above on the right to learn more about these — and more — puzzle pieces from the episode, then hit the comments with your theories on how they all fit together!

Ready for the next episode? Read the Westworld Season 1, Episode 7 recap here!