Warning: The following post contains spoilers from Sunday’s Westworld. And if you need to catch up, check out last week’s Westworld recap here.

As Westworld gallops toward its Season 1 finale, it’s easy to forget that guests like Jimmi Simpson’s William have lives — jobs, obligations, significant others! — waiting for them outside the park.

William even brings up his fiancée in Sunday’s episode, “Trompe L’Oeil,” saying “I have a life waiting for me” just as things between he and Dolores are warming up.

And then, how the robotic worm turns.

But wait! Before we get to William and Dolores knocking cyber boots in Sunday’s episode, “Trompe L’Oeil,” can we talk about the hour’s other huge developments?

* Bernard is a host! Secretly made by Ford a long time ago, and therefore heeding his creator’s call, the bespectacled ‘bot lures Theresa down to Ford’s secret lair… where Theresa finds sketches, realizes what’s up and then realizes it’s way too late for her. Ford orders Bernard to kill her, and the host does.

* And the reason DELOS was having Theresa beam the host’s code up to a satellite? None of the intellectual property is backed-up offsite — and the board wants a safety net in case Ford wipes all the hosts’ code when he’s pushed into retirement.

* After witnessing Clementine’s decommissioning — thanks to a sham on Theresa and Charlotte’s part that makes the young prostitute seem violent — Maeve announces to Felix and Sylvester, “I’m getting out of here. You two are going to help me.” And if they don’t help her? “I’ll kill you.”

Phew! Now, about that sex…

William and Dolores make love in a swaying train car after having a conversation about how they’ve gotten glimpses of a life that’s real — and they want to chase it. If William isn’t yet at the stage where he’s ready to sell all his earthly goods and buy a Westword lifetime pass, as he gazes at his robot love interest, it certainly seems like he’s far more willing to play make-believe now than he was upstairs in that brothel.

So when TVLine recently got Simpson on the phone, we wondered whether a post-Pariah William was even thinking about his vacation’s inevitable (or is it?) end.

“Each moment, he is making a choice to stick around for the next moment,” he said. “I think that’s kind of the way we live our life. Like, we’re making choices, and then once you make the choice, you’re in it. Then it’s less about choices and it’s just about being present. So he makes each choice to stick around longer, [then] the moment he gets dropped into keeps on getting larger and deeper.”

He adds, ” I don’t think he’s decided one way or another this is going to end or this isn’t going to end, but I think the pools that he’s dropping into are getting wider.”

Read on for more of Simpson’s thoughts on this week’s steamy development, his colorfully expert season-finale tease (“it’s not some bulls—t cliffhanger”) and more. 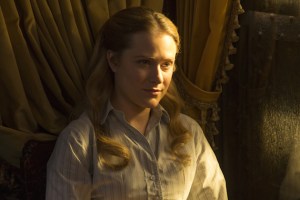 TVLINE | When we meet William, he’s very much an observer. But as the story goes on, he rapidly becomes a key player in one of the show’s main storylines. Do you think the events that transpired in Pariah flipped a switch in him?
That’s a keen observation, Pariah. I think like all of us, the things that affect and ultimately change William are multi-layered. Initially, clearly he is brought to this park not necessarily against his will, but it’s certainly not his idea. As you noted, he is observing a little bit more, and the advances from Clementine come when he is pretty convinced this is not a place for him. He is convinced that reality is real, and [the trip to Westworld] is an endeavor of his crazily hooked-up friend, who is always doing this kind of thing.

Most of us don’t really just think completely with our dick, or whatever you have, and so that seems really natural. I think what changes William is being able to actually intellectually connect with another. Now, the fact that it’s an artificial other, he is grappling with. I think it’s clear that this person, Dolores, he is able to relate to her more than anyone in his immediate life, and so that’s the change. It’s the connection. So it’s not like, “Oh, now I’m willing to f–k something.” It’s just moving forward on a level that he understands.

TVLINE | The sets look so amazing. I know that my inclination would be to poke through everything, open every drawer. Are you too professional for that?
Oh, no. I’m exactly the same as you. [Laughs] Every single thing, I was poking around, because that’s kind of like what I do at like Disneyland. Like, where is it fake? Where is the corner that reveals the truth? And it really was so detailed. I think it was probably a combination of a lot of the set where we shot Sweetwater was historical. I think they’ve used it in some really cool productions in the past… So yeah, I turned every knob I could.

TVLINE | Have you ridden anything like Disney’s Pirates of the Caribbean since you wrapped shooting? Does it change the way you look at those kind of immersive experiences?
I think the problem is, is I’ve always been that way to begin with. And it’s not like in a cynical way. It’s more of like [I’m] interested in how the magician’s doing it and fascinated and respectful, but like how?! As opposed to like relaxing and just enjoying the goddamn show. I have a problem doing that sometimes.

TVLINE | Talk to me about Dolores and William’s relationship as we move toward the end of the season.
The decision in [Episode] 7 is something it’s like for most of us in real life. It’s either something that represents “We made this choice that we’re close, and now we’re going to realize it physically.” Or sometimes it just happens to be — and is often the case — “We just made the physical choice, so let’s see what else can happen.” [Laughs] So that is the case here. Definitely.

TVLINE | I’ll take anything you can tell me about Episode 10, the season finale.
Let’s see. Well, I would say I was on the edge of my seat all the way until I got the 10 script… I think we all had different ideas, and then when 10 came — I think I could speak for most of the cast — the general feeling was like, “Holy f—king s—t.” Because basically, what they’ve done is they’ve somehow tied up everything you wanted to know and then pointed this whole world of other s–t that you hadn’t really thought of that now you really, really want to know, too. It’s not some bulls–t cliffhanger where you’re like, “Oh f–k, what now?” It’s like, “Oh my God, thank you, and I can’t wait for more.”

Ready for the next episode? Read the Westworld Season 1, Episode 8 recap here!