Note to Westworld‘s subterranean engineers: You might wanna put a few more Maeves into the development pipeline, and fast.

The gutsy android madam (and there’s a phrase I didn’t think I’d type today) is made of some very tough stuff, which she proves in this week’s episode by carving into her own abdomen and exhorting a bandit to poke around in there like he’s a trick-or-treater searching for that elusive full-size candy bar.

The reason behind the hooker’s sudden interest in self-surgery? She suspects that her belly may hold the answer to why she’s suddenly having frequent, unsettling visions regarding violent events she doesn’t remember experiencing — and when she comes across an answer buried deep in her obliques, it gives a whole new meaning to the saying “go with your gut.”

Elsewhere in the park: Ford can be scary. (Oh, and he totally knows Bernard and Theresa are shagging.)

Read on for the highlights of “Dissonance Theory.”

LITTLE GIRL’S GROWING UP | Dolores’ evolution continues as she talks with Bernard in the wake of her parents’ deaths. When she comments on how much she’s hurting, he says he can make those feelings go away. “Why would I want that?” she asks, puzzled, and then echoes the conversation he had about his son with his wife last week: “Pain, their loss, is all I have left of them.”

And just in case you’re still on the fence about whether Dolores is thinking for herself or merely parroting programming she’s had for years, she comes out with this observation: “I think there may be something wrong with this world, hiding underneath. Either that, or there’s something wrong with me. I may be losing my mind.” Intrigued/encouraged, Bernard asks her to try to find the center of a maze, “then maybe you can be free.” Dolores’ face lightens a bit at that. “I think I want to be free,” she says.

Dolores goes back into the park, where she wakes up still on the outing with William and Logan. And when Bernard hears that Quality Assurance (aka Theresa’s team) is taking over the investigation into the stray host who bashed in his own head, he doesn’t fight it. Elsie is very unhappy about this turn of events, telling her boss that the recent aberrations are not “a f—ing glitch.” But he’s unmoved. “The hosts don’t imagine things. You do,” he says, pointing out that the constellation the stray was carving isn’t Orion: “There are three stars in Orion’s belt, not four.” 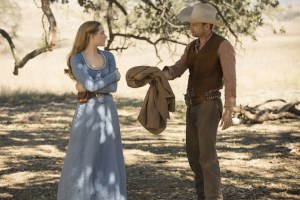 LOGAN LEVELS UP | Out in the badlands, William wants to bring Dolores back to Sweetwater, but Logan isn’t having it. There’s more of Logan being a callous degenerate, but the main thing to take away from this interaction is that Logan’s family — into which William is marrying — owns a company that has a stake in Westworld.

They wind up in the town where The Man in Black killed all those people, including Lawrence’s wife, a few episodes ago. Dolores encounters Lawrence’s eerily calm daughter and asks her, “Where are you from?” The girl is using a stick to trace a maze in the sand at her feet. “Same as you,” she replies. “Don’t you remember?” Dolores has a few unsettling flashes of a church and a graveyard, but then the girl is gone and a sheriff is trying to hustle Dolores back to one of her pre-programmed loops… until William intervenes and says she’s with him. (Side note: This show has laid out a bunch of questions — like the girl’s comments — and I will willingly stick around, but I’m gonna need some awesome answers when all is said and done.)

And when William and Logan’s bounty-hunting party gets its man — Slim — but then Logan finds out who Slim’s boss is, he shoots the deputy dead and begs William to “go black hat with me” because they’ve stumbled onto “the best Easter egg in the park.” Though William protests loudly when Logan talks about shooting Dolores, he (and she) go along for this new ride.

THE SNAKE’S TALE | On another expedition entirely, The Man in Black and Lawrence reach the end of the arroyo and find a badass woman whose entire torso and neck, as well as half of her face, is tattooed with a snake. Upon closer inspection, it’s the blonde we saw ride into town with Hector just before the last big massacre in Sweetwater. She’s uninterested in taking on TMIB as part of her crew… until he shoots some of her men and says he can singlehandedly break Hector out of the jail he’s stuck in — if she’ll tell him the story behind her tattoo after he’s successful.

TMIB ruminates on how Arnold created a world where anything, save human death, is possible, “which means that no matter how real this world seems, it’s still just a game.” And he adds that Arnold “had one story left to tell, a story with real stakes, real violence” and that the woman’s tattoo is a clue.

One of the other men in her party is a guest; he approaches TMIB and starts gushing that “Your foundation literally saved my sister’s life.” But he’s cut off when the gruff black hat threatens violence if the adoring dude doesn’t shut up. “This is my f—ing vacation,” TMIB grouses. (I’m sure there’s a think piece in this about real world motivations and in-park actions, but I’m sure someone else is drafting it as we speak.)

TMIB gets himself arrested and locked in a cell with Hector. But thanks to some exploding cigars, they’re free rather quickly. So, about that tattoo tale? The woman’s mother was killed by a gang of costumed men when the woman was 7; she tracked all but one down and repaid the favor, then permanently painted her body with their blood. The one that she’s still hunting? “Most know him as Wyatt,” she tells TMIB, who smiles like he’s just won the psycho-murder-bot lottery.

Later, TMIB’s party rides by an area Wyatt was rumored to be and find a nearly dead Teddy strung up like those guys we saw last week. Womp womp.

IN WHICH FORD IS FRIGHTENING | Ford is hard at work having crews break new ground in the park, all to go along with the new narrative he has in mind. And Theresa meets him there for lunch to talk about how the board is concerned with the extent of the changes he’s making. The conversation gets increasingly chilling, as Ford talks about how much power he has (the phrase “we are gods” is almost never uttered by people who have completely benign motives, is it?) and how he knows absolutely everything that goes on both in Westworld and behind the scenes. That’s when we find out that he’s aware of her sheet-rumpling with Bernard, but I’m less concerned with that than I am with the hair-raising stillness of all of the hosts in that section of the park suddenly brought to a standstill, seemingly by Ford’s mere will.

“So I will ask you nicely: Please don’t get in my way,” he says, all smiles, but there’s no warmth behind it. And when she mentions that the board will send a representative to argue, he shocks her by saying that they already have. Hmm…

MAEVE ON A MISSION | And now, Maeve. While talking to Clementine, the madam experiences some auditory static and some visions of the other hooker covered in blood, which morphs into a memory of a guest shooting up the whole saloon. She grabs at her abdomen, but there’s nothing there — and that still seems to be the case when she goes home, strips to her undies and paws at her midsection with a look of extreme frustration on her face. Then, she notices a tiny spot of blood near the hem of her garment; someone from the park’s costume department’s getting fired!

Another vision/memory shows her one of the park’s technicians in those hazmat suits they wear, and she hastily sketches it afterward. But when she goes to hide the drawing under a floorboard, she finds a cache of similar drawings: This has happened before, and she hasn’t remembered.

Later, as some Native Americans are marched through town, a child drops its toy… and the toy is of a man wearing one of those suits. A soldier tells her the figure is part of the indigenous people’s religion. So she’s got a ton of questions and zero answers by the time Hector and his crew ride into town under those blankets. Once the scarred baddie steps into the saloon, Maeve puts a gun to his head and promises him whatever’s in the safe if he can tell her what the sketch is all about. He confirms that it’s a “shade,” a character from native lore, “a man who walks between worlds. They were sent from hell to oversee our world.”

But that’s not all Maeve wants. As previously mentioned, she gets Hector to cut her and then digs out the projectile herself, partially relieved that “I’m not crazy after all.” And as the constable bangs down the door looking for the outlaw, Maeve and Hector have one heck of a bloody makeout session before a hail of bullets peppers the door (and, we assume, their incredibly attractive synthetic bodies).

Ready for the next episode? Read the Westworld Season 1, Episode 5 recap here!